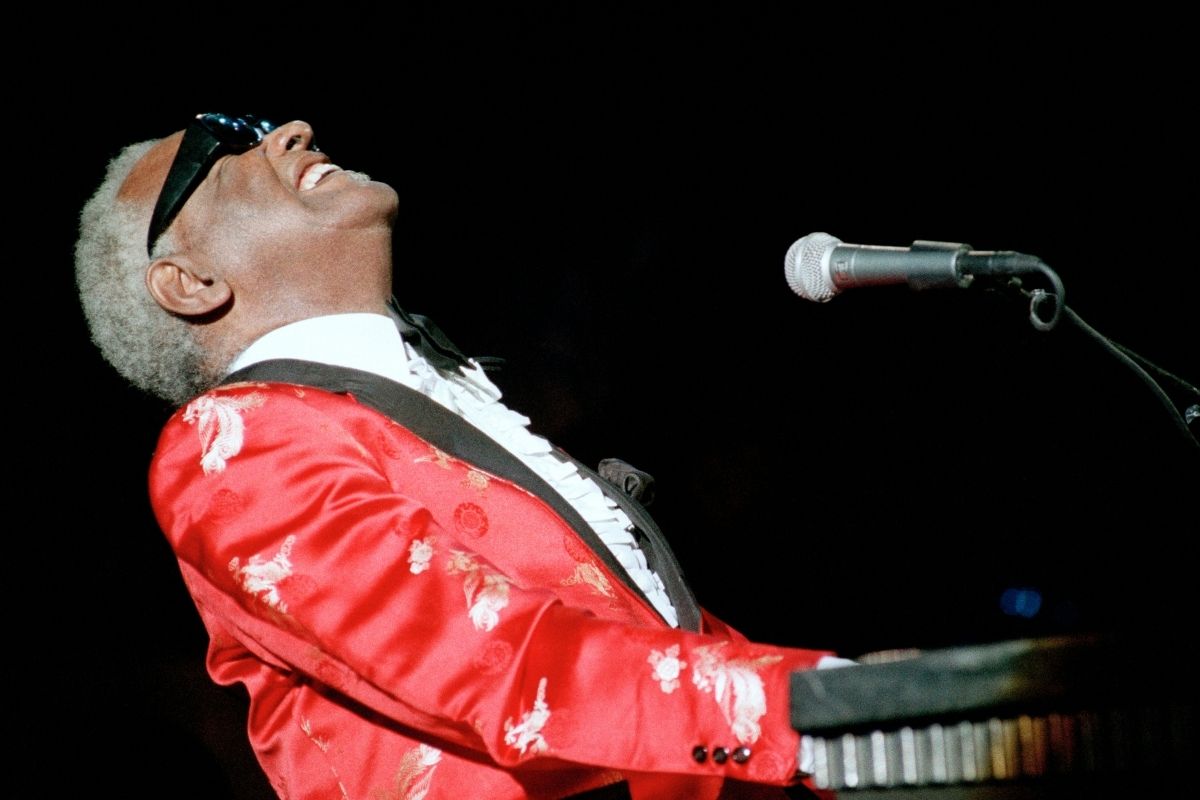 Let?s all take some time to remember Ray Charles? final album, Genius Loves Company: the eclectic collection of duets that served as a farewell to ?The Genius? himself and temporarily branded the coffeehouse chain, Starbucks as an artsy musical contender. Yes, Starbucks. In collaboration with Concord Records, Genius Loves Company was the debut release for Hear Music, Starbucks? own record label ? and it surpassed all expectations. Appearing on coffee counters just two months after the death of beloved blues icon, Ray Charles, the CD, which featured the likes of Elton John, James Taylor, and Willie Nelson, was an event in itself during a time when visiting Starbucks and ordering your medium macchiato in Italian (Grande latte, skim milk, hold the whip!) was also still an event.

The year was 2004. Jamie Foxx would soon win an Oscar for his own portrayal of the blind prodigy in Ray, another piece in the posthumous celebration of Charles? legendary life. But even more than Ray, Genius Loves Company pays more than a tribute to the center artist. It teaches art a lesson. Because the covers that makeup Genius Loves Company (each duet is the cover of an old, familiar track) are all better than the originals. That?s right. Even Judy Garland?s Over the Rainbow.

The History of Genius Loves Company

It?s possible that I?m biased. I was in kindergarten when Genius Loves Company came out and my parents, who were still excited by the new coffee shop in our neighborhood, bought the CD immediately. They played it all the time. Except for ?Somewhere over the Rainbow,? it was my first time experiencing such famous songs as ?It Was a Very Good Year,? ?Crazy Love,? and ?Fever.? But when I grew up and eventually did hear the originals, I was just disappointed! Frank Sinatra does not hold a candle to the strange, surprising pairing of Ray Charles and Willie Nelson?s braided narrative in ?Very Good Year.?

Ray Charles and Natalie Cole?s take on ?Fever? is a soul-dripping, sensual send-off of Peggy Lee?s. It returns the complicated song to its fiery R&B roots. (?Fever was first recorded by Little Willie John.) And ?Crazy Love,? which is Van Morrison?s own, is improved immeasurably by the addition of Ray, whose slick keys kick the song up a jolt from any typical romantic ballad. The two converse through the song, quipping, as if challenging one another to build and build a sound that seems to reverberate.

The sound. That?s what sticks on Genius Loves Company. This genre-bending CD crosses so many styles and decades across twelve tracks, but crystal-clear production unifies every beat. Coproducers John Burk and Phil Ramone along with audio engineer Al Schmitt ensure an enveloping soundscape so that popping in Genius Loves Company always becomes an immersive experience. (As of now, in 2020, Genius Loves Company is still not on Spotify. Maybe one day.) This work was rewarded; Ray Charles? final masterpiece won eight Grammy awards, including Album of the Year. And yet despite the critical acclaim, Genius Loves Company was never overplayed. The duets have managed to stay lowkey.

Perhaps because it was the end of an era; not only for Ray Charles but for the established tradition of CD purchasing. Despite selling 5,000,000 total copies, the album was only downloaded 52,000 times. Appearing on the exact cusp of our iTunes-driven digital revolution, Genius Loves Company, and the world that it entered, feels largely forgotten. Even Starbucks? warm-lit, the soft-cushioned haven is now an ancient memory, as the chain has become a global empire synonymous with commercialization. All that makes Genius Loves Company more than just an album; it?s an artifact.

The Full List of Duet Covers on Genius Loves Company.

3. ?You Don?t Know Me,? Ray Charles with Diana Krall

4. ?Sorry Seems to Be the Hardest Word,? Ray Charles with Elton John

“Sorry Seems to Be the Hardest Word” is particularly interesting. By turning Elton John?s lovelorn song into a duet between two men, especially two male figures as public as Ray Charles and Elton John, the back-and-forth is subversive ? even brave for the time. Ray’s love duet with Van Morrison sings outward, to a female subject, but Elton John and Ray Charles address each other directly. Whether or not the somber ballad is intended romantically, this collaboration offers welcome new interpretations of the original work. It was also the last recording Ray Charles ever made.

6. ?Do I Ever Cross Your Mind?? Ray Charles with Bonnie Raitt

7. ?It Was a Very Good Year,? Ray Charles with Willie Nelson

10. “Heaven Help Us All,? Ray Charles with Gladys Knight

11. ?Over the Rainbow,? Ray Charles with Johnny Mathis

The 10th Anniversary Edition of Genius Loves Company also includes two additional tracks with Poncho Sanchez and Take 6. Take a moment from your day to listen to this beautiful and remember the wonder, Ray Charles.

Watch: Ray Charles Had a Total of 12 Children With 10 Different Women