Why Ricky Nelson Was More Than a 50s Teen Idol 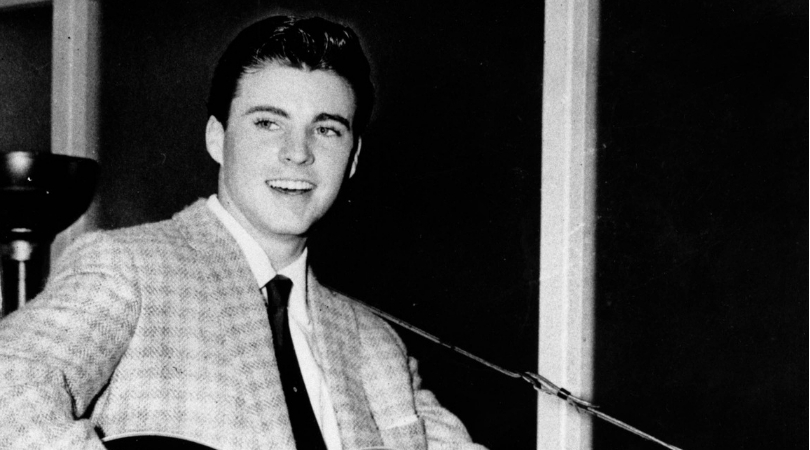 Eric Hilliard Nelson, best known as  50’s teen heartthrob idol Ricky Nelson, was a rockabilly musician and had an early influence on the country-rock genre. Nelson was born in 1940, in Teaneck, New Jersey to parents who were entertainers. Before the age of ten, the talented youngster appeared alongside his father, Ozzie, a jazz musician, mother, Harriet Hilliard, and brother on a comedic radio show. The Ozzie & Harriet show was picked up in the early fifties by a network and ran as a tv show.

His life in the public eye started there. However, he wasn’t trying to become a singer initially. The story goes that he didn’t record/demo any music seriously until he was trying to impress a teenage girlfriend. Influenced by rock and roll, he recorded “I’m Walking” by Fats Domino. Naturally, there was some promotion from the Ozzie & Harriet show, that helped the song’s popularity. It charted at number four.

While he didn’t have an extensive range, Ricky Nelson did have good influences, from Elvis Presley to Carl Perkins. He charted as one of the highest Top 40 acts from 1957 and 1962. He was beat, as you can assume, by the King of Rock n Roll himself, Elvis Presley. Be-Bop Baby, Stood Up, Poor Little Fool, Lonesome Town, Travelin’ Man, Young World, and Teen Age Idol were some of his best works throughout his career as a musician.

All of these showcased his style variety not limited to ballads, country music stylings, and more rock and roll influenced works. His single, Hello, Mary Lou featured a popular James Burton solo. He continued to make music while appearing on Ozzie & Harriet until the show’s cancellation in 1966.

By this time the singer, who was 21 at the time and going by Rick, was starting to make more and more country music. He toured often and recorded off and on for about a decade more. However, since he didn’t expand outside of the country genre and did not write much of his own music, and after The Beatles set a very high standard for up and coming musicians, he and his music began to fade over time.

However, he is still celebrated in his own right. His life was tragically cut short after he and his fiancée died in a plane crash in 1985. They were headed to one of his gigs in Dallas on New Year’s Eve.