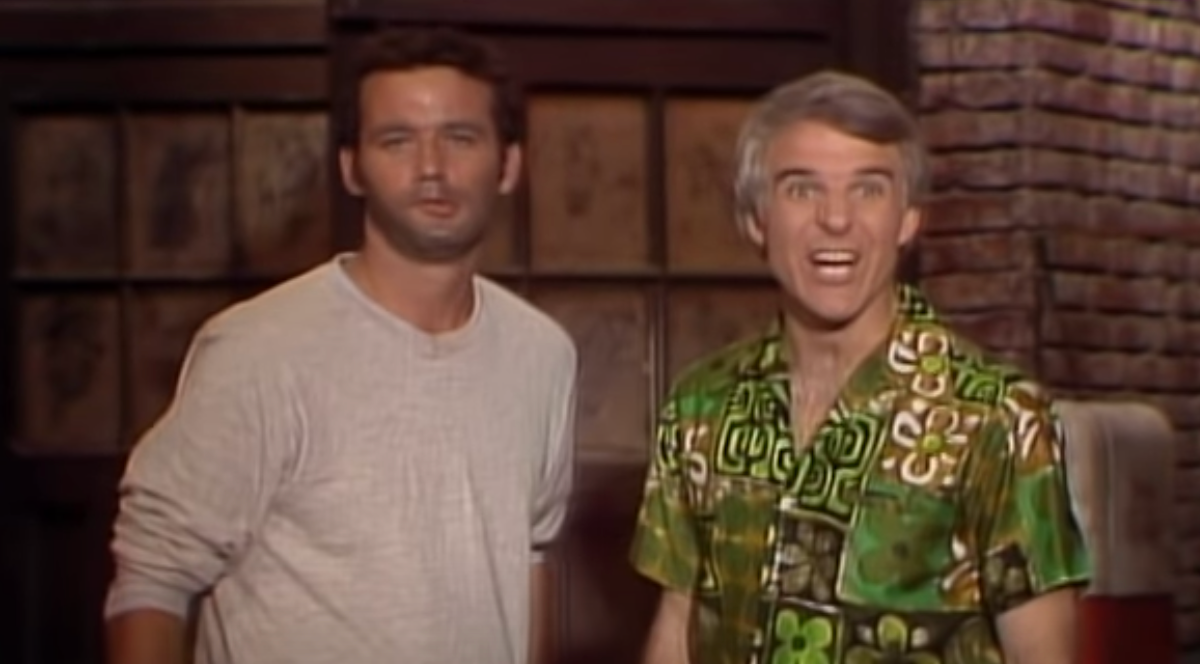 Both Baldwin and Martin, along with other frequent hosts like Tom Hanks, Tina Fey, Will Ferrell, and Justin Timberlake, among others, are part of Saturday Night Live’s revered “Five-Timers Club.” A club so exclusive not even Robin Williams was able to get in. (Side note: somehow Steve Martin has never even been nominated for an Emmy Award for his work hosting SNL.)

Though Martin has appeared on NBC’s iconic late-night comedy and variety show every single decade that it has been on the air (and that’s not even including cameos), there might be no SNL cast member he ever had more fun appearing alongside than Bill Murray. Arguably even more so than Eddie Murphy, his fellow wild and crazy guy and Festrunk Brother Dan Aykroyd, or good comedy pal Martin Short.

When it comes to the Murray-Martin comedy connection on this New York institution you don’t have to look any further than the monologue. Multiple times when hosting while Murray was a cast member Martin utilized his fellow comedy legend for big laughs.

To open his season three hosting gig, Martin does some of his typical ’70s stand-up comedy material. It’s goofy, it’s quick, and it’s fun. But the laughs really start when Bill Murray comes on stage as a clueless audience member whom Martin forcibly disrobes under the guise of performing magic.

Apparently, in the days of John Belushi and Jane Curtain, the hosts used to pay the SNL cast member with crackers? Or maybe it was just Steve Martin. At least that’s what was going on in this hysterical monologue, in which Murray performs tasks and tricks for Martin in exchange for little treats.

What the Hell is That!?!

Outside the monologue and cold opens, this is a sketch you can tell Martin did with Murray just because he enjoyed goofing off with him. It’s just two guys — Martin doing some sort of redneck’s voice and Murray doing his Carl Spackler from Caddyshack — asking a simple question: “What the hell is that?”

You have to imagine that Martin basically said, “Hey Bill let’s go be idiots for five minutes. It’ll be fun.”

This was an ensemble sketch with half the cast, including Aykroyd, Belushi, Gilda Radner, Curtain, and Laraine Newman along with Steve Martin. By far, though, it’s Murray and Martin (and Belushi) who steal the show here. Given the premise, a terrible meidevial doctor who has no idea what he’s doing, they should probably revive this character this year for the Coronavirus pandemic. (Cast Kate McKinnon as Broomhilda.)

Bill Murray plays the straight man opposite Steve Martin’s weirdo goofball in this sketch and, though Murray doesn’t seem like the type who breaks often during a skit, Martin definitely pushes him to the limit here.

Watch: This Classic Scene From “Stripes” Was One of the Defining Moments in Bill Murray’s Early Career