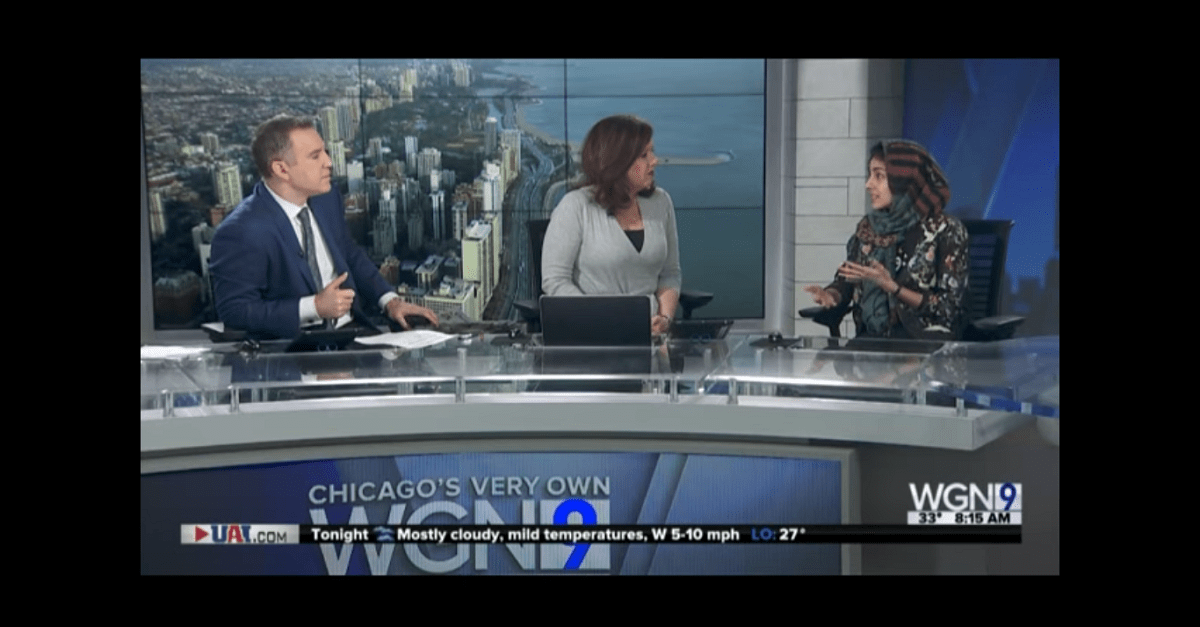 It has not been a good week for Chicago newscasters and racial sensitivities. After a graphics mixup on ABC that said the Winter Olympics are taking place at P.F. Chang’s, the morning team at WGN 9 effectively said, “hold my beer.”

Robin Baumgarten and Larry Potash were hosting Muslim fashion blogger Hoda Katebi on the show to discuss her blog JooJoo Azad (which means “Free Bird” in Farsi) and her book Tehran Streetstyle. Katebi is an Iranian-American and University of Chicago graduate, who grew up in Oklahoma.

RELATED: Women in Iran are so done with mandatory hijab rules and are risking it all to show it

“When I first started wearing the hijab, or headscarf, in sixth grade, that was easily the worst year of my life because Oklahoma’s a very homogeneously white and conservative state. I was physically assaulted, people tried to pull off my hijab…it was basically several years of trauma.”

This traumatic experience set the course for Katebi’s interest in the intersection between fashion and how people react to the way others dress. The three then discussed what fashion means for Muslim women both in historical and contemporary contexts, in the United States and the Middle East.

And thennnnnnnnn things took a turn.

“Let’s talk about nuclear weapons,” said Potash. “Some of our viewers may say, ‘we cannot trust Iran.’ What are your thoughts?”

“I mean, I don’t think we can trust this country. What has this country done to the majority of the countries in the Middle East?”

After explaining America’s role in imperialism and providing weapons for countries like Iran, Katebi, a self-described pacifist, then had to even defend her own status as an American.

“A lot of Americans might take offense to that,” said Baumgarten. “You’re an American. You don’t sound like an American when you say things…you know what I mean?”

“That’s because I’ve read,” Katebi responded. “I think it’s important that we look beyond these really simple narratives that we’re told whether it’s about Muslim women or whether it’s about the legacy of this country, knowing that this country was literally built on the backs of black slaves and after the genocide of indigenous people.”

“There’s a lot we can be proud about but I don’t think that we shouldn’t let that blindside us to the realities of our situation,” she added.

Although her website says she is sarcastic and angry, Katebi managed to remain calm on the show and the conversation turned to her community organizing work.

Katebi also posted a response to the interview on her blog. You can watch the full interview for yourself here: