A man from a Houston suburb struck by lightning over the weekend is expected to survive.

Kenneth Reeder of Conroe was hit while standing outside his home on Saturday afternoon. He was rushed to Conroe Regional Medical Center in serious but stable condition.

Doctors theorized Reeder’s pacemaker may have saved his life by preventing his heart from losing its rhythm after the strike.

The incident was just one example of the severe weather passing through the Houston area over the weekend: in Livingston, a tornado touched down about 70 miles north of Houston, destroying a self-storage facility and causing thousands of dollars in damage.

Among weather experts, Houston is known as the “lightning capital of Texas.” A 2012 study by scientists at Texas A&M even found Houston gets 20 lightning strikes per square mile in an average year.

A powerful weather system also came through Houston last weekend, when at least one Houston family lost their home to a fire caused by a lightning strike.

The home in the northwest suburb of Copperfield was struck by lightning while the family was out to dinner Sunday night. Three firefighters were injured while putting out the blaze.

They were taken to a local hospital and expected to make full recoveries.

After the storms, the National Weather Service issued a series of warnings for people caught outside during a lightning storm.

The agency warned people to avoid open areas or tall objects while outside, as these can attract lightning strikes.

RELATED: Just one day after lightning killed over 300 reindeer in Norway, a lightning strike killed 19 cows in Texas

While inside, people can avoid lightning strikes by staying away from windows and out of the bathtub or shower, as the copper tubing can also attract strikes. 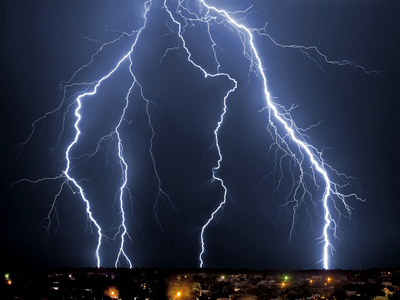