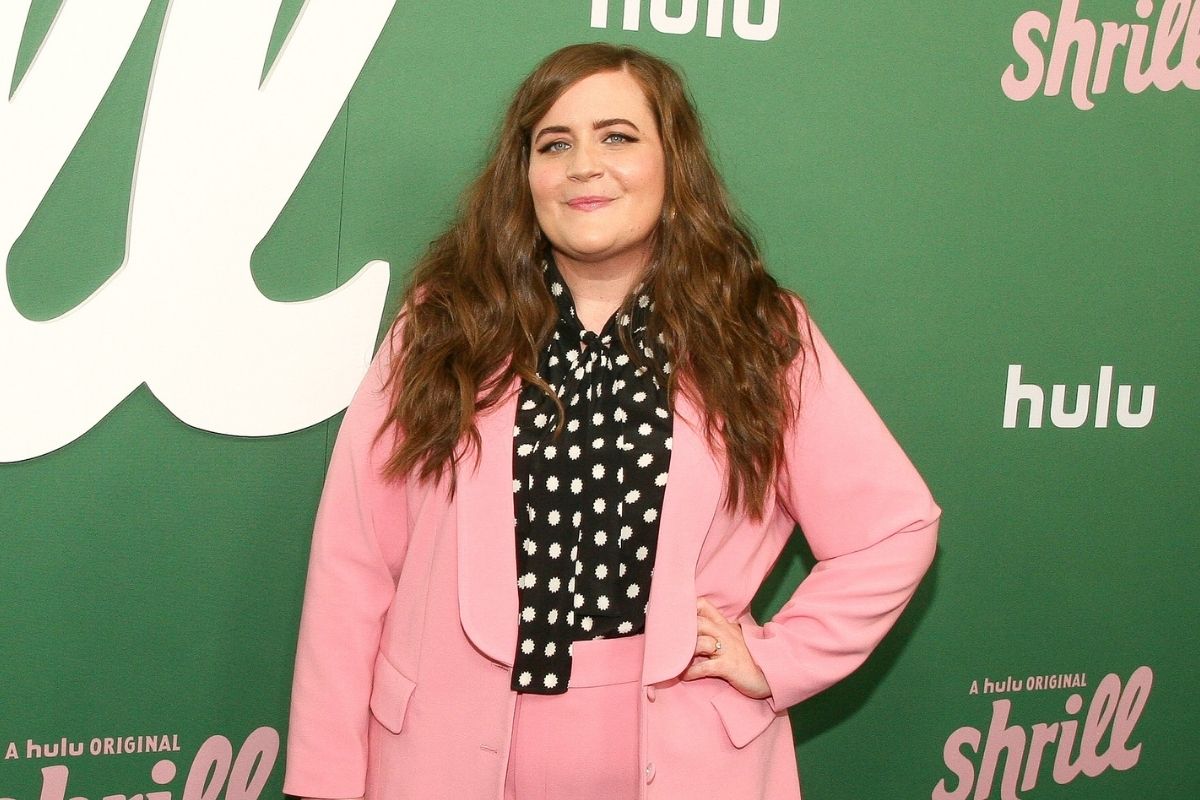 Aidy Bryant is having a moment. In addition to sending social media into a collective panic after hinting on the recent Saturday Night Live season finale that this season may be her last, Hulu just released the much-anticipated final season of the TV show Shrill, of which Bryant is the co-creator, executive producer, and star. Everyone wants to know what Aidy Bryant is going to do next?let?s hope it includes getting to spend some time with her husband of three years, comedy writer Conner O?Malley.

Aidy Bryant and Conner O?Malley met for the first time in Chicago in 2008 at the Annoyance Theatre when they were both booked to perform in the same show, as Bryant shared in a 2015 interview with Bust. After complimenting each other on their performances, they ran into each other again a few days later at the famed iO Chicago theater. O?Malley asked Bryant for her phone number, they went on a date, and they?ve been together ever since. Bryant said of their relationship ?I don?t want games or manipulation or trying to make each other jealous. I want full, comfortable honesty. And that is really what Conner and I have always had.?

Aidy Bryant was born in Phoenix, Arizona on May 11, 1987. She went to high school at Xavier College Preparatory and graduated from Chicago?s Columbia College in 2009. After years performing in Chicago with The Second City as well as the Annoyance Theatre and iO Chicago, Bryant relocated to New York City in 2012 when she became a cast member on NBC?s Saturday Night Live. Her years on the show have included hilarious impersonations of everyone from Adele to Elton John to Sarah Huckabee Sanders and she originated several beloved characters, including Morgan, co-host of ?Girlfriends Talk Show? with Cecily Strong?s Kyra, and Chubbina Fatzarelli, who is half of the ?70s buddy cop duo ?Dyke & Fats? alongside Kate McKinnon‘s Les Dykawitz.

Bryant told Bust the sketch was ?one of her proudest moments? and said of her friendship with McKinnon, who is the show?s first out lesbian cast member, ?We?re for each other. Very quickly we were both comfortable being our best and worst selves in front of each other…But I would say even beyond that, we just know each other like sisters. Really.? Bryant has been nominated for two Primetime Emmys for her work on SNL. In addition to her starring role as Annie Easton on Shrill, she has also had recurring roles on the show Comedy Bang! Bang!, Girls, and Horace, and Pete and provided the voice of D.D. Danger on the animated Amazon series Danger & Eggs.

Conner O?Malley was born in Chicago, Illinois on December 20, 1986. In a 2016 interview with Paste, he described his family as ?all super working class, union jobs, fix it ourselves kind of people, and I was the first one who decided to do comedy, go to community college and then drop out.? After meeting and falling in love with Aidy Bryant in Chicago, he relocated to New York with her when she was cast on SNL and started making what Paste called ?intense, hilarious Vines.” O’Malley eventually went viral for his character Mark Seevers, a Donald Trump megafan affiliated with the fake website TruthHunters.com.This led to him getting hired as a comedy writer for Late Night With Seth Meyers. He has also written and/or performed on The Chris Gethard Show, Joe Pera Talks With You, Netflix Presents: The Characters, I Think You Should Leave With Tim Robinson, and was co-stars with his wife on an episode of Broad City as well as several episodes of Shrill. He continues to make satirical videos on his popular YouTube channel.

A Proposal Featuring A Dog In a Bow Tie

In 2017, Aidy Bryant did an interview on Late Night With Seth Meyers in which she told the story of how her now-husband Conner O?Malley proposed to her. It is appropriately sweet and goofy and involved Bryant coming home to work to find her dog waiting for her wearing a bow tie. She told Meyers “I was like, ?My dog doesn?t wear a bow tie! Where is he going tonight??? This unexpected greeting was followed up by yet another surprise: “Basically, the second I shut the door, a man ? who I discovered was Conner ? frantically came around the corner and was just like, ?Will you marry me?!? No box, no ‘I love you.’ … Just a man in full terror standing very far from a dog in a bow tie, just holding a loose ring going, ?Will you marry me?!?” Considering the chaotic hilarity of the situation, Bryant thought the whole thing was a joke at first, but when she realized this was an actual marriage proposal, she accepted.

In January of 2020, Bryant told People magazine ?I definitely want to have kids,? noting that she was currently really busy but was ?working really hard now to have more space later.? In speaking about her marriage to O?Malley, she said ?I love his family so much, and he?s really close with my parents and my brother. So, I think part of it feels more official in that way. Like the unifying of the families.? Perhaps the happy couple will have enough space in the near future to start their own family.