Get To Know Donald Trump’s Kids 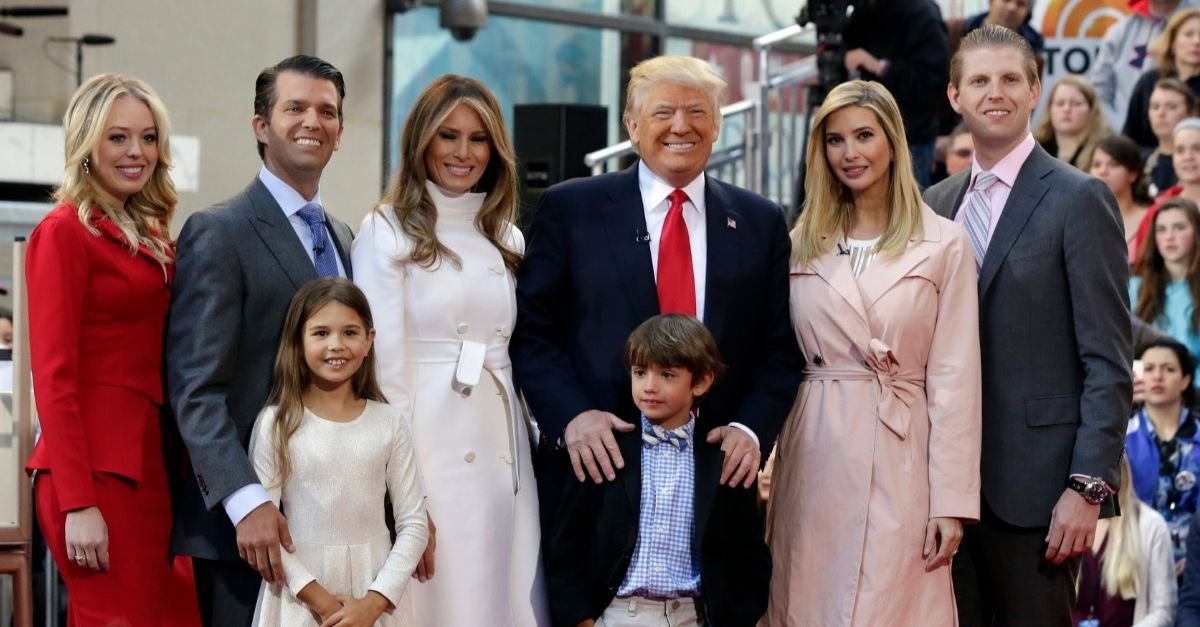 We all know that President Donald Trump has several kids, some in the spotlight more than the others. There is Barron, Ivanka, Donald Jr., Tiffany, and Eric. Donald Trump has five children in total, three with his ex-wife Ivana Trump, one with ex-wife Marla Maples and one with current wife Melania Trump. Growing up in the spotlight, his three eldest children have managed to find happiness and success stepping away from the celebrity children drama.

Almost all of Trump’s kids have partaken in the Trump campaign and have played a prominent role in his political career. So, here is pretty much everything you need to know about his offspring, especially now with the 2020 Presidential Election coming up.

Donald Trump Jr. is a 42-year-old father of five children. Yes, safe to say the Trump Legacy will live on for quite some time. Jr. is said to be fluent in Czech and named one of his sons Tristan Milos after his grandfather. After boarding school at Hill School in Pennsylvania, he followed the president’s footsteps and went to The Wharton School of the University of Pennsylvania where he earned his bachelor’s degree in real estate and finance.

In 2001, a year after his graduation, Don Jr. went on to work for his father and is now an Executive Vice President of development and acquisition at the Trump organization. He met his wife, Vanessa, at a fashion show, and the rest was history as they created five little human beings. Unfortunately, the couple broke up and finalized their divorce in 2019. He is now dating former Fox News personality, Kimberly Guilfoyle.

It was an honor to introduce the People’s President as he accepted the Republican nomination last night. 🇺🇸

38-year-old Ivanka Trump is probably one of the most well-known from the bunch and is the breakout success of the family. The same year that she and brothers Eric and Donald founded the Trump Hotel collection, she went on to launch a jewelry brand that has since spawned lines of shoes, clothing, and accessories carried out by stores such as Bloomingdale’s, Zappos, and Nordstrom. She was formerly an Executive Vice President of Acquisitions and Development for the Trump Organization and worked for the real estate developer Bruce Ratner a year after college. She later joined her dad’s company in 2005 or she was the lead negotiator on the purchase of Trump National Doral Miami, which is a $1 billion property she scooped up four $150 million.

As far as her education, she attended Georgetown University for two years before transferring to the Wharton School of the University of Pennsylvania where she graduated cum laude with a bachelor’s degree in economics in 2004. Ivanka married Jared Kushner, who is now a senior Trump advisor, in 2009. The couple has three children, Arabella Rose, Joseph Frederick, and Theodore James. Ivanka currently serves as Senior Adviser to her father in the White House. She has also worked model and has written two best-selling books: The Trump Card: Playing to Win in Work and Life and Women Who Work: Rewriting the Rules for Success.

Happy Father’s Day Dad. We are all so proud of you and we love you very much! @realdonaldtrump

Born in 1984 Eric is the youngest of Donald and first wife Ivana’s three children. He is currently the Executive Vice President of the Trump Organization where he is responsible for overseeing quite some heavy stuff. Unlike his sister and brother, the 36-year-old decided to go to Georgetown over Wharton and went straight to work for his father after he graduated. He and Eric have the same title, Executive Vice President of Acquisitions and Development, but his Niche is said to be in construction. He is a trustee and Executive Vice President of the Trump organization, running alongside his older brother. Throughout their father’s presidency, they have both continued to do deals and investment with foreign countries, as well as collect several payments in their U.S. properties from foreign governments. He also created the Eric Trump Foundation which is dedicated to raising money for terminally-ill children at St. Jude Children’s Research Hospital in Memphis, Tennessee.

Back in 2012, he proposed to his girlfriend of 5 years, Lara Yunaska, now Lara Trump, at his dad’s $19.5 million Westchester estate with the ring from Ivanka’s jewelry collection. Yunaska is a former personal trainer and TV producer. The couple married in front of 400 gas at Trump’s Mar-a-Lago Club located in Palm Beach Florida where Eric’s brother-in-law officiated the wedding. On September 12, 2017, the couple welcomed their first child Eric “Luke” Trump and on August 19, 2019, Yunaska gave birth to their daughter Carolina Dorothy Trump.

Happy Birthday Dad! @realdonaldtrump I’m so grateful for your love and guidance. I love you!

Tiffany Trump is the only child of Donald Trump and his second wife, actress Marla Maples. She was born in 1993 and grew up with her mom in California after the parents split up. The 26-year-old graduated from the University of Pennsylvania in 2016 where she double majored in sociology and urban studies. She is scheduled to graduate from Georgetown law this year. Since 2018, she has been in a relationship with Michael Boulous, who is a billionaire heir and business executive. During Trump’s 2016 presidential campaign, she joined her father and other members of the Trump family at campaign appearances.

She also spoke at the 2016 Republican National Convention, and again this year just like her other adult siblings. As far as her popularity, she has been dubbed as one of the ‘Rich Kids of Instagram’. Some of our friends include Peter and Harry Brant, sons of Peter Brant and Stephanie Seymour, Kyra Kennedy who is the daughter of Robert F Kennedy Jr., and EJ Johnson whose son is Magic Johnson.

Last but not least we have America’s favorite Barron Trump, who is the son of Melania and Donald Trump. Despite living in the White House, the 14-year-old tends to stay out of the spotlight more than his other siblings. He was born in 2006 and goes to St. Andrew’s Episcopal, which is a prep school in Maryland. Surprisingly enough Baron is quite tall and overshadows his father and his mother, and is the first boy to live in the White House since JFK Jr.

Apparently the younger heir prefers to wear suits over sweatpants and has an entire floor to himself at his parent’s Trump Tower penthouse. In 2018, First Lady Melania Trump spoke at a forum at Liberty University saying that Baron is not on social media and that he is really into sports. He is fluent in both English and Slovene thanks to his mother. Barron and his mom took some time to move into the White House in Washington, DC after the president was elected and lived in New York City halfway to the president’s first year in office.