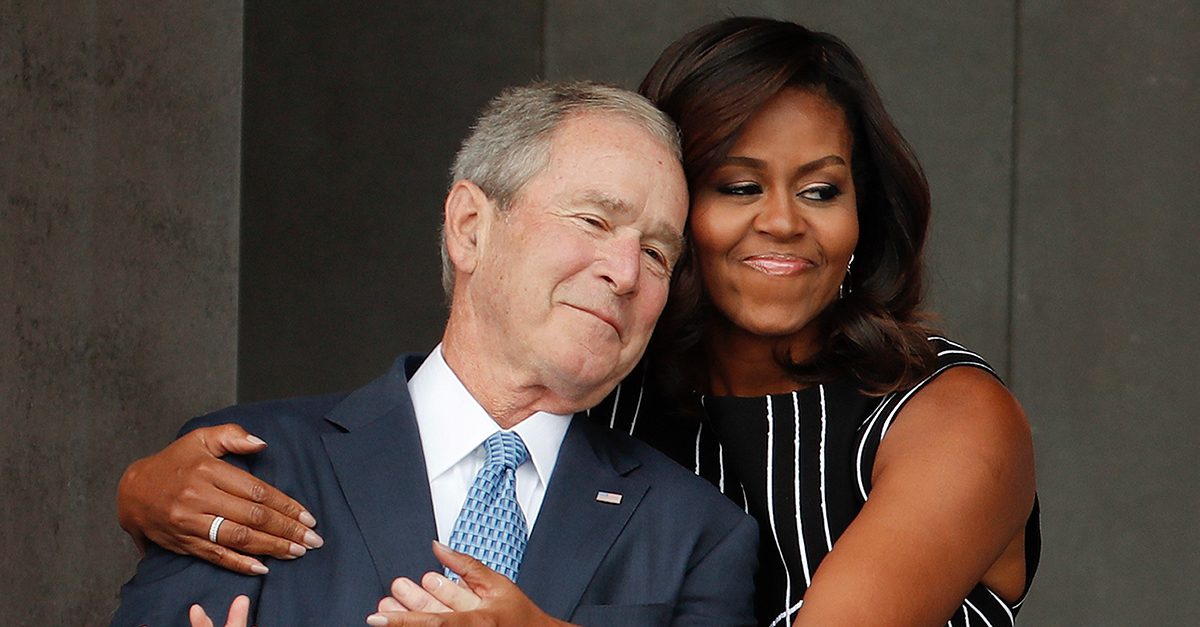 George W. Bush has been making the news rounds this week to promote his new art book, “Portraits of Courage: A Commander in Chief?s Tribute to America?s Warriors,” a collection of the former president’s paintings of veterans. On March 1, Bush opened up to PEOPLE about his affection for a close friend — former First Lady Michelle Obama.

Bush, 70 and Obama, 53 were frequently seated next to each other at official events such as Nancy Reagan?s memorial service, an interfaith memorial service for Texas police officers last year, and the dedication ceremony to mark the opening of the Smithsonian?s National Museum of African American History and Culture in Washington, DC.

The two quickly went viral online after photos of them smiling and hugging at various events made the rounds on social media.

Here they are sharing a moment at the memorial service to honor the five police officers who were killed and the many who were injured during a shooting in downtown Dallas on July 12, 2016.

And here they are hugging in a moment of genuine friendship during the dedication ceremony for the Smithsonian Museum of African American History and Culture on the National Mall in Washington DC on September 24, 2016.

?I can?t remember where else I?ve sat next to her, but I probably have a few wise cracks and she seemed to like it okay,? Bush added. ?I needle her a little bit and around her, I?m fairly lighthearted. [The Obamas] are around serious people all the time and we just took to each other.?

Bush also added that he would be open to working with Barack and Michelle Obama to help military personnel, military families, and veterans through various organizations and causes. Bush has dedicated much of his time and effort post-presidency to helping wounded warriors, and though only time will tell if Barack Obama chooses to also get involved in that important cause, the two former presidents could end up working together toward a common goal.

?I think they?re interested in, also, doing things with our troops of course now in their after-life, as I call it,? Laura Bush said about the Obamas.

Bush added, ?It?s going to take them a while to find their footing and figure out how they?re going to do what they want to do. But if there?s a way to be symbiotic, we?ll do so.?

This story was originally published March 3, 2017.

Watch: Romney Announces He Will Vote for Trump Supreme Court Pick, Not Wait for Election