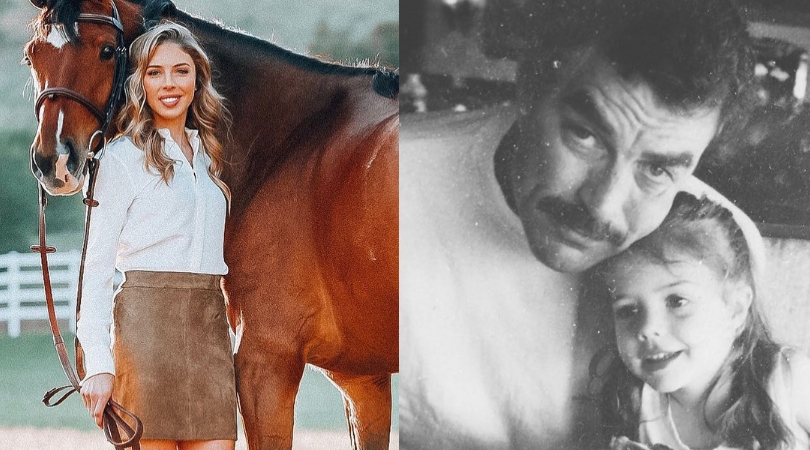 Many know Tom Selleck for his famous roles in tv shows Magnum P.I, Friends, and Blue Bloods, and movies Quigley Down Under, and Three Men and a Baby. To some, he may also be known for that fabulous mustache that sits perfectly on his face. For decades, it’s pretty much been part of his identity, and let’s face it, it’s for a good reason. He looks great with it painted on, I swear! Selleck is one of the most famous guilty pleasure actors of his generation, noticeably staring in the detective drama show Magnum P.I. But, do you know why he decided to leave the show?

Although he was incredibly successful and adored by fans all around the world, he decided to take a step back from his TV investigator days, because he wanted to make time for his daughter. Selleck began dating his future wife, Jillie Mack, on the set of Magnum P.I. and announced they were pregnant in 1988 with their first daughter Hannah. Hence, the reason why Selleck decided to quit his role and move to a ranch in Ventura Country in California, allowing their daughter to have space away from prying eyes.

So, who is Hannah and what does she do? Surprisingly, Selleck’s daughter decided not to follow her father’s footsteps in an acting career on the red carpet, rather found her calling while living on the ranch. Selleck has a horse breeding business on the land, which allowed Hannah to take up the equestrian sport, and has actually won several tournaments across the world.

Here are a few facts about Hannah Selleck that make us all kinds of happy:

1. Out of the Spotlight

The family wanted to live their life out of the spotlight to make sure Selleck’s daughter could have a normal life. Soon enough, they all adapted to their new country lifestyle at a ranch on an avocado farm. Selleck takes care of the farm himself and taught Hannah everything she needs to know about the country. Although Hannah did state she missed out on things that “normal children” do, she spent a lot of her time competing against other horse riders around the world, meaning she would miss out on school a lot.

Hannah started riding horses at the age of 4 after her parents encouraged her to try all kinds of sports. Throughout her years, she spent her days looking after ponies and hanging around the barn. At the age of 12, her love for riding horses became serious, and at the age of 14, she was stepping up to be a professional.

In an interview with Hollywood Reporter, she stated that she loved horses due to the connection she has with animals and “the whole riding culture”. Her love for horses grew after spending so much time caring for them and falling in love with the competition itself.

3. She Worked in a Public Relations Firm

After majoring in communications at Loyola Marymount University, Hannah wanted a career that could support her to ride at a high level. She got a job at a public relations firm, as an internship, where she worked for six months in Beverly Hills. Yet, she quickly realized it wasn’t what she wanted after she was required to be away from horses, making her “miserable.”

She stated, “I was only able to ride on the weekends, and that was a huge shock. After that, I realized I have to do the horses, so I quit the PR job. I started working for my coach and later became an assistant trainer.”

Working for her coach and several other professionals riders, she has been able to focus on her career and compete around the world. She also has a small breeding program in California where she develops young horses to sell. Growing up competing, she had older grand Prix horses throughout that she would use to compete.

She explained how as they would get older, some weren’t able to do their job anymore, so she decided to breed them. All her horses live at El Campeon Farms in Thousand Oaks, and she rides and sells horses for Meredith Herman’s Burgundy Farms.

At the age of 29, Hannah has a strong competitive streak, winning several competitions throughout her life. She has won a number of Laurels including the Silver Team Medal at the Prix de States in 2005; the 16-year-old Equitation Championship at Capital Challenge in 2006; the $35,000 Blenheim Summer Classic II Grand Prix in 2010, and the $10,000 Blenheim Summer Classic 1.35 Classic in 2011. Of course, being a world-class show jumper, she now competes at the Grand Prix level and also attends several prestigious riding events.

Although she prefers to stay out of the spotlight, Hannah has done a few notable modeling gigs. She was at the center of the 2012 ad campaign for the deodorant brand “Reviver”. She also did several modeling gigs in the past as a way to help out her friends, and to promote her sponsors, when they ask her to. Safe to say the good looks run in the family!

Yes, according to Hannah, her parents are delighted she has decided to create a career for herself on her own now that their daughter is all grown up. It can’t be easy facing the pressure of the entertainment industry, but it looks like Tom and his wife have raised a successful independent woman. Her father was actually the one who encouraged her to make the “horse business” work and loved the idea that young horses could be developed and trained. What a great dad!

Editor’s note: This article was originally published on October 24, 2018.