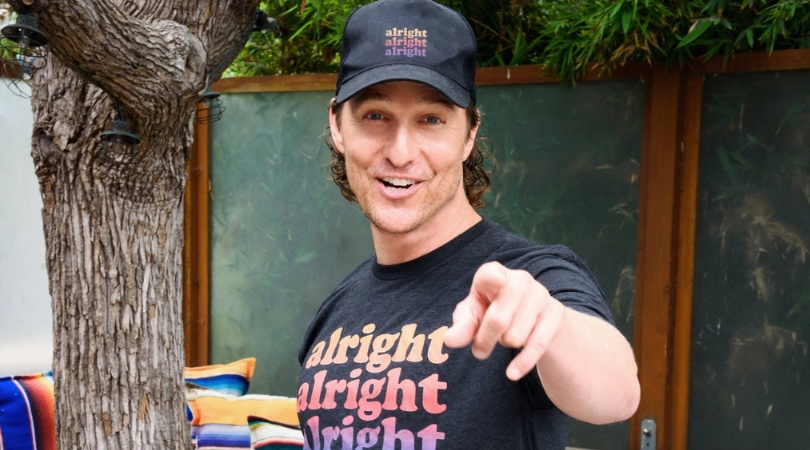 Is there anything Matthew McConaughey can?t do? Seriously, this man is like the ruler of Texas…especially Austin! From helping first responders to lending his voice to the GPA system, McConaughey always seems to make Texan?s happy!

The Oscar winner was born in Uvalde, Texas and is the youngest of three boys. So, it?s easy to see why he feels so comfortable in Texas since it is his home. You know what they say, one a Texan, always a Texan, right? To this day, his Texan roots show through his day-to-day life, his love for whiskey, and charisma. Let?s not forget his love for UT football!

So, why are we proud that McConaughey is from Texas?

1. He stays true to his Texas Roots

In an interview about his childhood and his decision to stay in Texas McConaughey stated,

The most Texas answer I have heard. It?s admirable, really, over a dozen of his films have been in Texas! From his independent film Lone Star to his award-winning HBO series, True Detective, he stays close to his roots. Let?s not forget his (now banned) ‘Don?t Mess With Texas’ commercial that showcases his love for his home state and hilarious humor.

Come on, admit it, we have all heard this once or twice. It’s McConaughey’s trademark when you think of him, you think of this phrase. They even have it as festivals all over Texas, printed on shirts. It?s become a true Texas staple. Celebrities always impersonate him, and it?s become one of those ?Texas Slangs? through the years. Famous celebrities such as Matt Damon, Jim Carrey, and Ross Marquand have all tried to impersonate his famous Twang! Baltimore Ravens kicker Justin Tucker even made a spoof about his popular famous Lincoln commercials!

3. He participates in local events

In 2018, the A-lister tweeted a video of himself to promote early voting while standing in line to vote himself. They Austin resident made it a point to show that if he can find time to cast his vote, anyone can. McConaughey reportedly waiting an hour and a half in line at his nearest early polling site.

4. He gives back to the community

Matthew @McConaughey teamed up with @WildTurkey to give back to Houston’s heroes.

Honored to welcome him to our city and thank him for spending time and recognizing our @houstonpolice, @HoustonFire, and 911 dispatchers for their service. #WildTurkeyGivesBack #HoustonStrong pic.twitter.com/LQZ5vk11Jc

As if we needed another reason to love him, in October, the Oscar winner surprised first responders around Houston with a free turkey lunch and gave inspiring speeches to thank them for their work after a deadly hurricane last year. The actor works with Wild Turkey, which he serves as creative director. In 2017, the actor took part of their annual Wild Turkey Gives Back Day, where he gave out turkeys in the company’s hometown of Lawrenceburg, Kentucky.

In honor of #GivingTuesday, if you’re so inclined pls support @jklivinFNDN which provides afterschool fitness & wellness programs for high school students. For a $10 donation, you’ll be entered to win a #DallasBuyersClub script signed by me. Donate here: https://t.co/fbGz9rYPJK pic.twitter.com/Ski2h3pzHM

When the actor’s father, James ?Pop? McConaughey passed away in 1992, he created the Just Keep Livin? campaign to help him carry on through the good and bad times. Along with his wife Camila, they created the foundation to honor James, where the logo includes a photo of his father in it. The foundation is dedicated to empowering high school students by providing them with the tools to ?lead active lives and make healthy choices for a better future.? The organization helps students in California, Louisiana, Texas, and Washington DC, making huge strides in educating students bout he important of service, wellness, fitness, and nutrition. The foundation has partnered with San Antonio’s Spurs? Silver and Black Give Back Organization to help with their mission in Texas.

Yes, not only is he an actor, but he is now a professor as well! Being a Texas graduate, he actually became a faculty member of the University of Texas. The actor began teaching a filmmaking course with Gary Ross after they both worked together on the American war film Free State of Jones. I mean…if that doesn?t make you transfer to UT, I don?t know what will! Time to move to Austin!

7. His Love for Texas Football

It?s no secret that McConaughey loves Texas Longhorns football! He is known for giving some incredible speeches to the Longhorns before the games begin, and it is swoon-worthy! Leave it to the actor to give drop worthy monologues of how amazing the Texas team is. It kind of makes me want to become a football player, even though I am in no condition or shape to be a player. But hey, I?ll sit on the bench if I can hear his voice every time before and during a game.

Editors Note: This article was originally published on January 2, 2019.