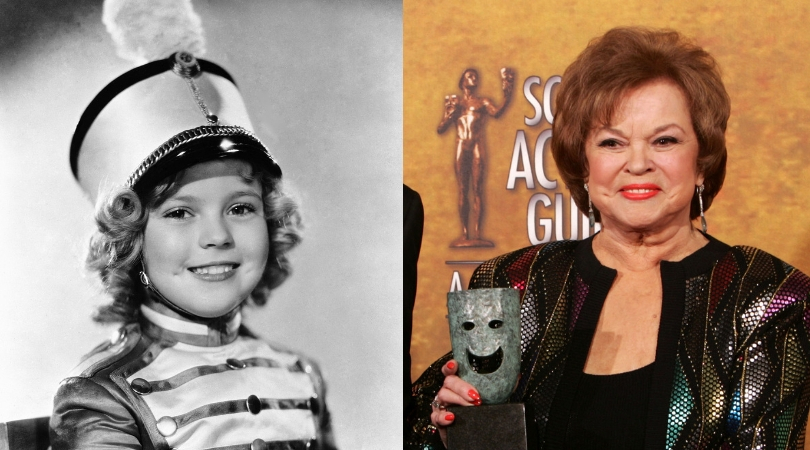 Shirley Temple Black was one of the first iconic child stars to ever walk this earth. Born to a dancer turned homemaker and a banker, with two older brothers, Shirley rounded out the Temple family. Her smile and little dimples brightened their home and then Hollywood with her voice, acting, and dancing capabilities. From 1935- 1939 she was the most popular movie star in America.

Before the starlet danced her way into America’s hearts with more than  20 films, she was enrolled at Meglin’s Dance School in Los Angeles in 1931. Within a year she was scouted and signed to a talent representative and starting her first production, “Baby Burlesks,” a series of shorts satirizing current films casting toddlers in all the roles.

And, yes, the shorts were as eyebrow-raising as the title. She was promoted to 20-minute shorts and got her first speaking scene when she was 3 in a short called “War Baby.” Temple was an exotic dancer in a bar for soldiers, where she wiggled around in an “off the shoulder number”, oggled by toddlers portraying shirtless “army men” with safety pins on their diapers. So, there she was, receiving her first kiss before she even turned 5.

Because of this, her acting career’s start gave life to some of the rumors to the dark side of Hollywood. Things like an assumed pedophilia ring and child mistreatment on sets. It has been noted that in many of her films she is orphan/motherless and rescued, in some sense by a man or “father figure”. The producer for Wee Willie Winkie was even sued for the young girls’ overt flirtatious behavior towards an older man. The “black boxes” are another example. These were portable, soundproof sound technician work stations that any misbehaving children had to sit in as punishment. Further, the actress admitted that while she was being considered for the lead role of Dorothy in the Wizard of Oz, the admits that an MGM producer had sexually harassed her.

Following this, and possibly due to the magnitude of the scandal and having aged out of the child star roles, she no longer got the same consideration for parts. She appeared in two movies that were unsuccessful with 20th Century Fox The Blue Bird and Young People. She had one successful movie in the 40’s- Kiss and Tell. Ultimately, she retired from acting at the age of twenty-two in December 1950.

Before her retirement, in 1942, Temple shifted to radio and television, including hosting her own show called “Shirley Temple’s Storybook”. She later became heavily active in political affairs and a spokeswoman for women’s sexual health. After a failed congress run, she was appointed as an US ambassador to Czechoslovakia and Ghana and continued to work with the UN.

At the age of 15, she met John Agar, an Army Air Corps Sergent, physical training instructor and member of a Chicago meatpacking family. They quickly married two years after on September 19, 1945, at the age of 17. On January 30, 1948, Temple gave birth to their daughter, Linda Susan. Unfortunately, temple divorced Agar on December 1949, winning custody of their daughter.

In January 1950, Temple met Charles Alden Black, a World War II Navy intelligence officer and Silver Star recipient. The two were married on December 16, 1950, and welcomed a son, Charles Alden Black Jr. on April 28, 1952. The couple then welcomed their daughter Lori on April 8, 1953.

At the age of 44 in 1972, Temple was diagnosed with breast cancer. The tumor was successfully removed and a modified radical mastectomy was performed on the child star. At the age of 85, Temple died on February 10, 2014,  after living a fulfilling life with many careers and a leaving behind a loving family. According to her death certificate, her cause of death was due to chronic obstructive pulmonary disease.

Definitely a lot of “orphan’ stuff in there for sure. But, Shirley Temples talent [and ringlets] can’t be denied! She was such an inspiring talent and force in the world. Be right back, if you need me I’ll be re-watch all of these. Now, where did I put my old tap shoes?

Editors Note: This article was originally published on August 29, 2019.