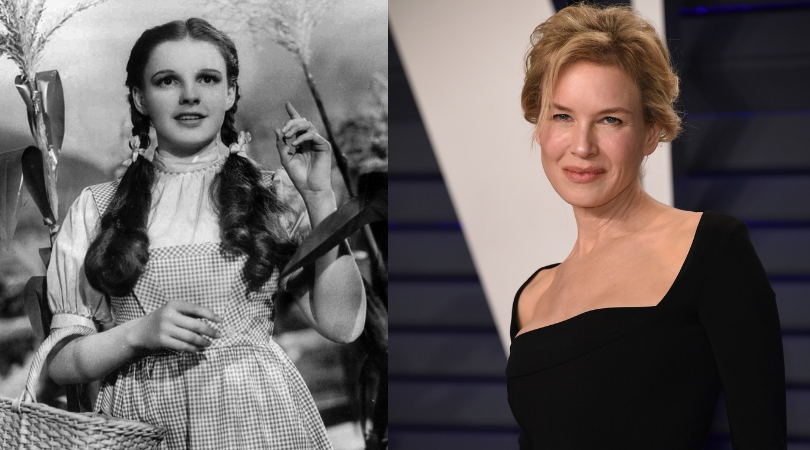 It’s here! The first trailer for the anticipated Judy Garland biopic is finally here and it is absolutely perfect! So much so that I watched it 4 times and cried my way through. Mostly because I didn’t know this was happening, but also because it’s just so darn good! Yes, Judy Garland, the legend herself, is coming to the big screen this year…but through Renee Zellweger! Zellweger will be portraying the beloved Garland in “Judy,” set to be released on September 27, 2019, and I have no doubts about her portrayal at all!

Zellweger takes on the classic ballad, “Over the Rainbow” that is played through the trailer, soothing the audience. “Judy” is said to be based on Peter Quilter’s play, “End of the Rainbow”, which follows Garland’s sold out 1968 run at the London nightclub Talk of the Town before her death of an accidental drug overdose in June 1969 at the age of 47.

According to Zellwegger, she had to spend two hours in the makeup chair to get prosthetics, needed contact lenses and several wigs to look like the wonderful Garland. The Oscar winner, known for “Bridget Jones’ Diary” and “Cold Mountain”, says she hopes the movie lends audiences a “deeper understanding of Garland” who in spite of her screen and countless stage triumphs is seen by many as a “tragic figure.”

?When there?s a better understanding of what it takes for a person to continue under certain circumstances there is a level of empathy and respect that you can?t help but feel. What she had to overcome in a time when women didn?t necessarily feel that they had power over their own lives in the way that we do today … that stayed with me and I hope folks will be moved by that as well.?

The film is set in 1968 and will dive into Garland’s behind the scene battle with her management, her relationship with fans and musicians as well as her family behind the scene of the London performances.

I don’t know about you, but catch me first in line when this movie comes out! I think Zellweger is the perfect actress to portray Garland, plus, they look so alike! I am living for all these biopics! Queen, Elton John, Judy Garland….they keep on coming!