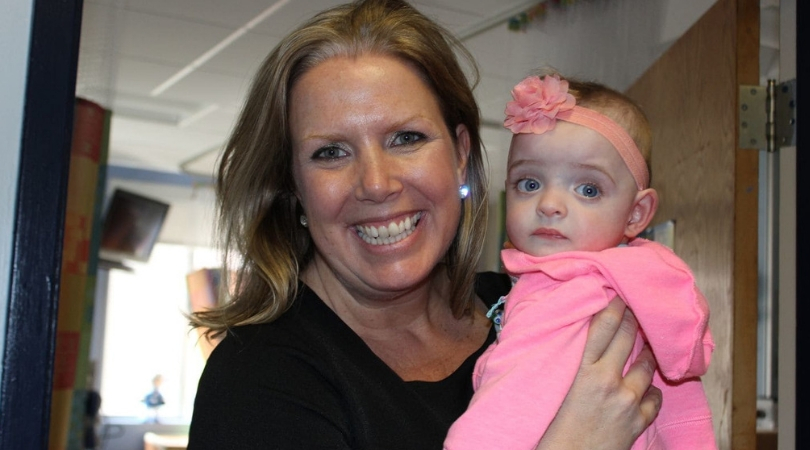 Two years ago, Liz Smith, director of nursing at Franciscan Children’s Hospital in Massachusetts ran into then 5-month-old Gisele, while going about her normal day. Smith learned that Gisele had been born prematurely at 29 weeks weighing 1 pound, 14 ounces. The baby had neonatal abstinence syndrome, which is a result of her birth mother using heroin, methadone, and cocaine during pregnancy. Gisele was in withdraw from the drugs and required a gastrostomy tube for 16 hours a day.

The state of Massachusetts had taken custody of Gisele in October 2016 after she was born at another hospital, but was quickly transferred to Franciscan Children’s where Smith worked. Her lungs needed specialized care and required a feeding tube. Smith quickly noticed that Giselle did not receive any visitors during her 5 months at the hospital, which meant she would probably go to foster care.

The now 45-year-old quickly decided she wanted to help the girl, and at 9-months-old Smith got the green light from the hospital to take Gisele home. The state agreed to let Smith take care of Gisele due to her experience as a nurse and trusted she would take good care of the infant.

During her time of fostering, Gisele’s birth parents were allowed supervised weekly visits, but the state ultimately determined they were incapable of caring for the infant and their rights were terminated. Nine months after, and no appeal from her parents, Smith decided to go through with the official adoption.

“The day I got a phone call with the adoption date was the day that I was jumping up and down. They said ‘October 18th.’ And it’s my grandmother’s birthday and I just started crying. When the judge referred to Smith as “Mom,” it finally sunk in. I think that’s where I realized I was a parent.”

Fast forward to 2019, Gisele is now a 2-year-old ball of spontaneity. Giselle still needs to use a supplemental feeding tube, but has turned into a healthy child who apparently loves cheese, avocados, and pizza. This is such an emotional and beautiful story. Not gonna lie, I shed a tear here and there. Can you blame me?

I guess some of us are meant to be on this earth to help others. Smith is the perfect example of it. Let’s all live our lives like her’s, she’s going places.

This story was originally published April 4, 2019.