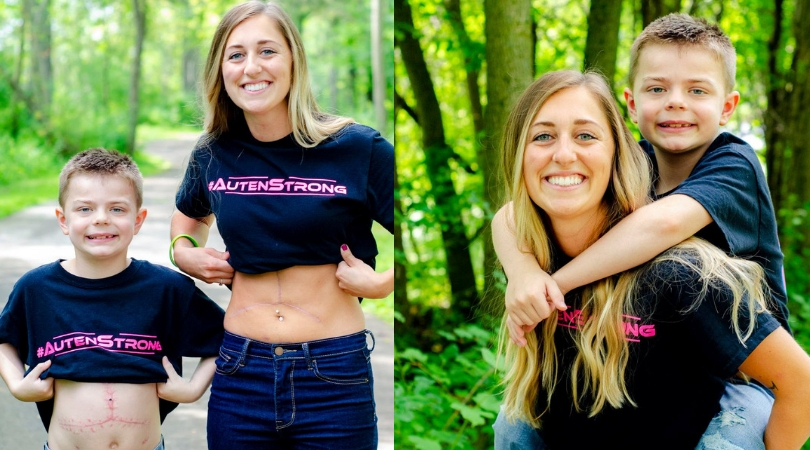 An 8-year-old boy has a new shot at life after a Milwaukee ICU nurse decided to step in and donate part of her liver in a life-saving transplant. Talk about a real hero. Nurses definitely don’t get enough credit for all they do to help their patients. Brayden Auten was able to return to his family’s home in Wisconsin in July after recovering for a partial liver transplant. The boy is now set to head back to school, months after his family was wondered whether he would make it.

Brayden’s story began back in April when he returned from school sick. According to his family, they took him to the hospital where doctors found an aggressive virus attacking his liver. That’s when his health quickly began to decline. As soon as the boy was administered, doctors at Milwaukee Children’s Hospital stated they had to “bypass everything” and was going on the transplant waiting list immediately.

On May 6, Auten’s mother, Ruth Auten, posted on Facebook that her son’s liver was quickly failing, and needed prayers and a miracle to find him a liver soon. The mother stated she was sharing her story online in hopes of finding a donor for the boy, but no one was a match. Weeks later, the mom had a positive update, saying that an Intensive Care Unit nurse, Cami Loritz, stepped in to help after learning she was a perfect match.

The mother stated, ?She has given up time and went through pain to make sure that my son has a chance to walk by my side again and be able to live and thrive like a regular 7yr old boy. So thank you Cami Loritz I will never be able to repay the gift that you have given my son and all of us!?

Weeks after recovery, Brayden is now home and he and the Wisconsin nurse decided to show off their successful surgery scars in a photoshoot to show the world the importance of life-saving organ donations. The photos show the duo wearing matching shirts and hugging with wide smiles. A true miracle indeed, we need more Cami Loritz’s in the world.

If you would like to donate to Brayden’s GoFundMe Page created to help the family with medical bills, you can click here.

Editors Note: This article was originally published on September 9, 2019.