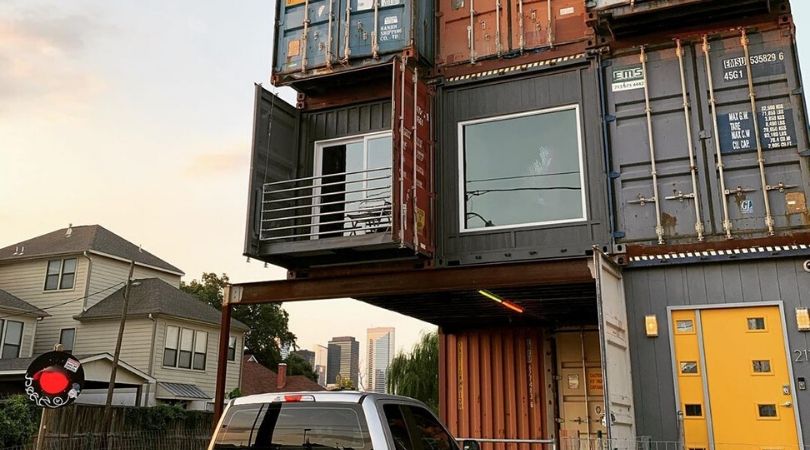 Don’t let this surprise you, but there is a whole “Shipping container dream home” section on Pinterest. A Houston man, however, took his enthusiasm for his dream house and made it into a reality. Apparently, before everyone became obsessed with the idea of container houses in recent years, this Houston man wanted one. He defines the shipping containers to be “strong, fireproof, long-lasting, hurricane-resistant“- characteristics that are definitely a plus in Houston. Will Breaux did not know much about building a house but he knew what he wanted for his dream home.

After hiring and firing people who couldn’t give him what he wanted, he decided to build his own house. He spent hours learning about constructing houses and created a 3D sketch of his house. He built each room step by step, made a floor plan, and slowly made his new living space.

The shipping container house is on McGowen street and is made out of 11 shipping containers, stacked intricately on top of each other. The cargo container home totals up to a 2,500 square foot house, has three stories, and a rooftop deck. However, its considered a single-family residence.

Here are some things people ask about the home!

Meeting @bencopperwheat in his Brooklyn studio for a tour and some custom clothing.

If you are curious and have more questions about Will Breaux’s (pictured on the left) shipping container home, you can read more about it here on the blog he made for his DIY project. On his WordPress, he documents the process of building the new home, overcoming obstacles and getting moved into the place.

And some well-worded quips regarding the living space. For someone who has never designed their own home, he sure did an amazing job! Not to mention his interior design tastes are top-notch! Way to go, Houston Man!

This story was originally published November 4, 2019.