Editors Note: This article was updated on November 18, 2020, after PBS announced the Peanuts holiday specials will return to TV.

Good Grief! PBS really pulled a full 360 on us. After several higher-ups realized that watching the Peanuts holiday specials on TV each year is a very long-standing tradition for fans, they decided to take back their decision to not air it on live TV. After Apple TV+ acquired exclusive rights to The Peanut shows, the streaming platform faced heavy backlash for keeping the long-standing specials from TV. Now, Apple has teamed up with PBS to broadcast both A Charlie Brown Thanksgiving and A Charlie Brown Christmas on TV in addition to making them available for it to stream for free on the Apple TV+ service.

A Charlie Brown Thanksgiving will air on PBS and PBS KIDS on November 22nd at 7:30 p.m. ET/ 6:30 p.m. CT. It will begin streaming on Apple TV+ on November 18th and will be available for free from November 25th to November 27th. As far as A Charlie Brown Christmas, it will broadcast on PBS and PBS kids on December 13th at 7:30 p.m. ET/ 6:30 p.m. CT. The special will also premiere on Apple TV+ on December 4th and will stream for free from December 11th to December 13th.

We’re feeling very thankful to team up with @AppleTV to share #ACharlieBrownThanksgiving with you this year! Tune in to this special one-night event on PBS and @PBSKIDS on Sun, Nov 22 at 7:30/6:30c. pic.twitter.com/ADW1R0FvCv

Editors Note: This article was originally published on November 8, 2019. It was updated on November 4, 2020, after Apple TV+ announced the purchase of the Charlie Brown Holiday Specials.

Sad news Charlie Brown fans, A Charlie Brown Thanksgiving will not air on broadcast TV for the first time and almost six decades. All of the Charlie Brown holiday specials were purchased by Apple TV+, which is a new popular streaming service. Luckily, the specials are set to air for free on certain dates.

If you wish to watch the Charlie Brown specials, be sure to download Apple TV before the end of the month. Even if you’re not a subscriber, you can watch a Charlie Brown Thanksgiving from November 25th to 27. You can also watch A Charlie Brown Christmas from December 11th to the 13th.

Good grief! Mark your calendars with a big Snoopy sticker. The holiday special, A Charlie Brown Thanksgiving is coming to a small screen near you, so grab a slice of pumpkin pie, turn on the fireplace, and set your DVR to enjoy this 1973 classic. The whole Peanuts gang will premiere on ABC on November 27th at 7 P.M.

The half-hour special features Charlie Brown setting up his very own Thanksgiving to share with his friends Lucy, Linus, Peppermint Patty, Sally, Marcie, and Snoopy. Charlie enlists the help of Snoopy and Woodstock in the kitchen, however, the two helpers seem to cause more havoc than calmness. The Thanksgiving dinner-turned-disaster ends with Snoopy and Woodstock serving the entire gang popcorn and toast instead of turkey.

Make sure to stay tuned after the airing of A Charlie Brown Thanksgiving, because closely following is the second cartoon, This is America, Charlie Brown: The Mayflower Voyagers. The episode, which is a part of an eight-part animated series back in 1988, follows the Peanuts gang as they tell the story of the 1620 Mayflower voyage from England to the new world. At the end of the episode, the gang enjoys the feast of Thanksgiving.

A Charlie Brown Thanksgiving first premiered on CBS on November 20, 1973, and continued to be aired every year on CBS until 2000. Then in 2001, ABC bought the rights and have been airing the special since. So make sure to tune in this year with a big bowl of jelly beans and toast. 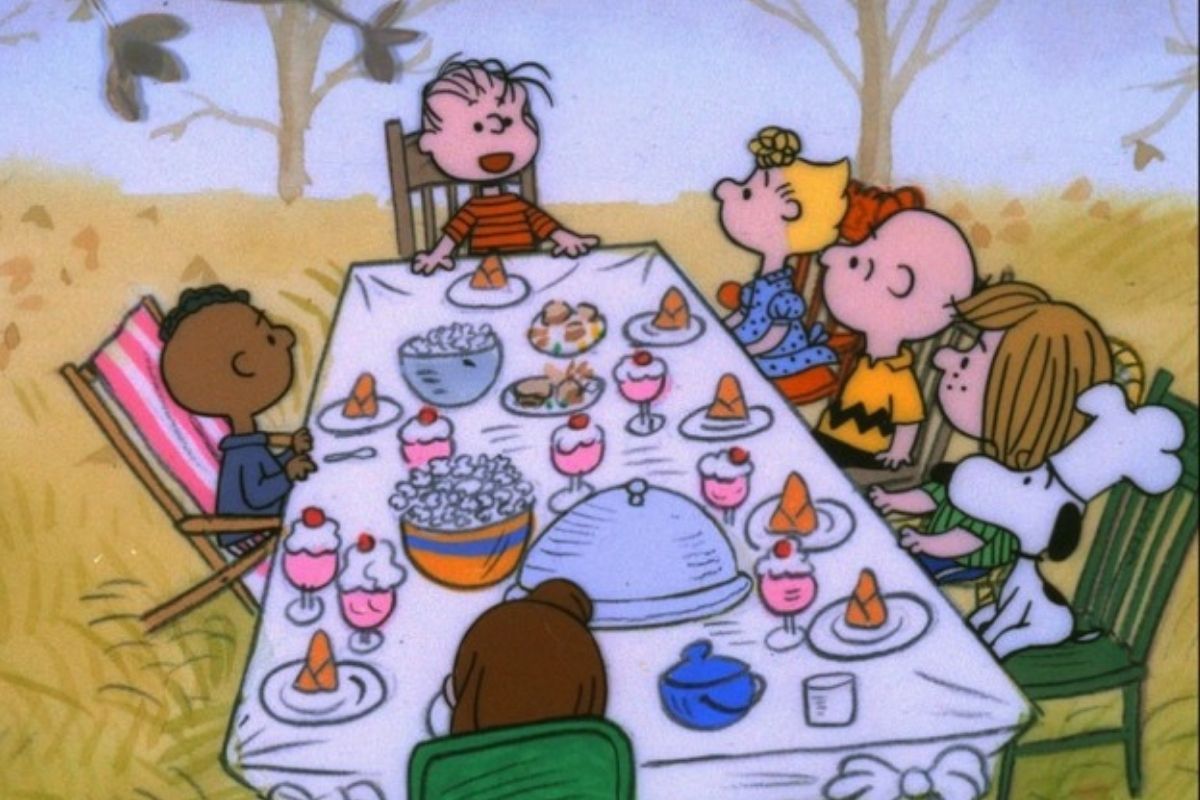