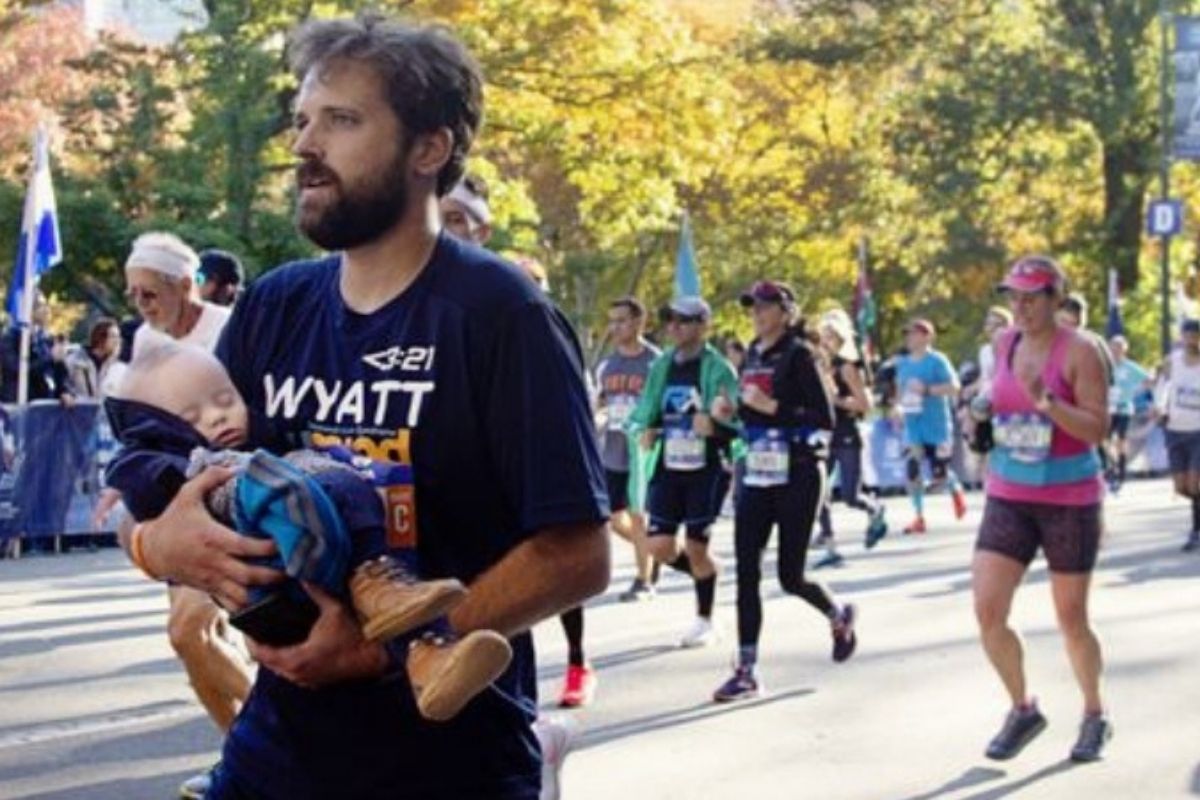 Okay, I suggest you don’t read this post in your office, or anywhere in public, because it’s a tearjerker. I know, I’m sorry, but it just had to be shown to the world. Back in November, a photographer caught a beautiful image of a man crossing the New York City Marathon finish line with a newborn in his arms for an incredible reason. Who was this man? His name is Robby Ketchell, and he is a scientist, a runner, a father, and apparently, Superman all rolled up in one.

Earlier this year, Ketchell and his wife Marya welcomed their beautiful son Wyatt. Wyatt was born with Down syndrome, which is why Robby decided to run the New York City Marathon in his honor to raise funds for other families with children with Down syndrome. Robbie stated when his wife gave birth to their own, there was so much involved in helping him become healthy, including physical and occupational therapy and early intervention. Wyatt was born premature and the couple had to spend 67 days in the NICU. When they left the hospital, Wyatt was weak, forcing him to feed off of tubes, which is why they fought every day to keep him from having to go back on one.

With the help of LuMind Research, a charity for people to run to raise money for research on Down syndrome, the Father came up with the idea to run the marathon in 3 hours and 21 minutes to represent the three copies of Wyatt’s 21st chromosome. His fundraising goal was $3,210 but the father managed to raise more than $11,000.

Left nothing out there, couldve backed off & did 3:40 but thats not what I came 4. Finished w/ my best friend Thx 2 our tribe for ur support pic.twitter.com/e2fltenqWs

Ketchell stated he trained hard to prepare himself for the 3-hour marathon, but from the beginning of the race, he realized it would be difficult, if not impossible, to reach his goals. By mile 8, he knew he was in trouble and by miles 17 to 20, he knew it would be over. “At mile 20ish, I got down on my knees. My legs felt like they were about to break. That was it. I knew I could walk it in at that point, but I had wanted to give it my all.”

Ketchell always planned on carrying Wyatt over the finish line, but by the time he reached mile 20, he realized he needed to choose between making his time goal or grabbing Wyatt. In the end, as we can see through the images, he chose to carry his newborn son across the finish line. Ketchell stated, “To me, it was almost better than breaking 3:21. I had pushed my limits, which was the point. I couldn’t go any farther. And we got to share the moment of going across the finish line together.”

The crowd began calling out Wyatt’s name throughout the entire race and cheering on the father as both managed to cross the finish line. Although he didn’t break his goal of 3:21, Ketchell was grateful for the support he was given, and for Wyatt. He believes the amount of love and connection to his and his wife’s journey is incredible.

“The main thing I want to do is to remind people that it’s not about setting limits on yourself—it’s about pushing past them. That’s a big thing for anyone who has Down syndrome. We struggle with this every day, as people try to limit Wyatt or just see him as a diagnosis. For me, running a 3:21 was a big deal. I had to really work for it, and as you can see I didn’t make it. But I went all-out pushing for it.”

Honestly, this is the sweetest thing I have seen in a while. It takes guts to run such a hefty marathon, let alone with a child in your arms. But, that’s what the father wanted to do to honor his son, and I admire him 100 percent for that.

Despite everything going on in the world that has scared us endlessly and makes us question humanity, there are still good people out there who try to give back to those without questioning it. That’s what life is about. Three cheers for amazing fathers doing everything they can to help their children. You’re my hero, Robby Ketchell.

Watch: The 3 Bad Dad Jokes No Thanksgiving Is Complete Without