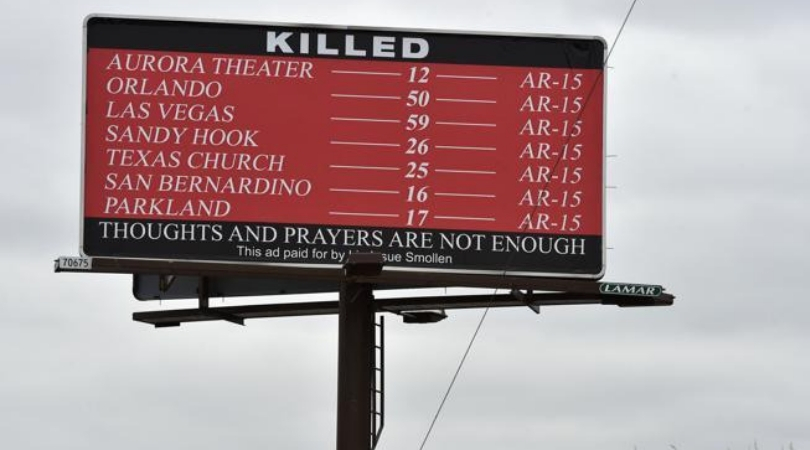 Two months ago a woman in Boulder, Colorado put her foot down and attempted to make a change about gun violence. Rush hour commuters in one of the most heavily traveled corridors in Boulder were being created with a strong political anti-gun violence message, pointing out that more Americans (1.4 million) have died in gun violence since 1970 than in all wars in the history of the United States (1.3 million). The sign ended with a plea “stop the thoughts and prayers.”

Now, Lindasue Smollen, who is the woman responsible for the billboard, changed the message on the sign, giving a list of seven mass shootings in the United States. Including the Aurora theater shooting, Orlando, Las Vegas, Sandy Hook, Texas Church, San Bernardino, and Parkland. The billboard also shows the number of people killed and the gun shooters used, which was an AR-15 rifle. The death toll of the 205 does not include the 11 people killed on Saturday, October 27, 2018, at a synagogue in Pittsburgh.

Smollen is currently paying $3,000 a month for space, and $500 for the graphics. She stated she will continue to change the message in an effort to keep it as timely as possible and keep it present in people’s mind. She decided to put the type of weapon used for the mass shootings after AR-15 has gained notoriety in recent years, due to their association with numerous mass shootings in the United States.

Earlier this year, Boulder City Council passed an ordinance banning the possession of these weapons, an ordinance that is currently undergoing two challenges in federal court. Smollen has started a GoFundMe page to help for future billboards and has raised nearly $6,000 as of November 1st. She states gun control debate in non-partisan because ladders in both parties fail to keep the public safe.

“We’ve become absolutely numb to mass shootings. It is the new normal. We no longer stop and be horrified on mass shootings. And after Las Vegas, I just simply could not believe that nothing, nothing, was done.”

Three mass shootings have happened between the first billboard put in September and now, which is why she plans to make another sign soon to update the board and alert the community. She states, “How do you stay on top of the horror in this country? You can’t have a billboard that takes two or three weeks to do and keep it timely. There’s always another shooting.” She believes part of the solution will come from keeping the discussion going, no matter how uncomfortable the situation gets.