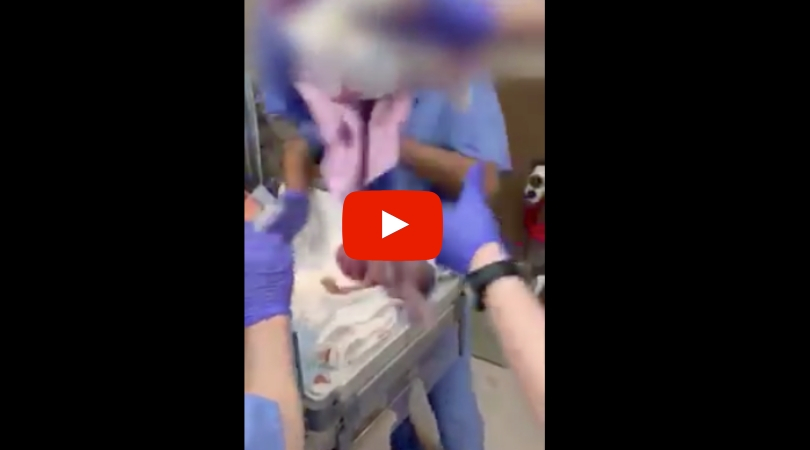 An Arizona couple is speaking out and accusing a hospital of negligence after their newborn daughter was dropped immediately after delivery. Derrick and Monique Rodgers, from Phoenix, posted the video on Facebook out of frustration, urging parents to always be aware of how hospital staff handled newborn children.

The 12-second clip shows three staff members from Dignity Health Chandler Regional Medical Center cleaning the premature baby after she was born. A hospital employee then picks her up, with scissors in her hand, so another nurse could remove the material below her. As the worker is holding the newborn, named Morgan, the baby slips out of her hands and lands on her head, almost falling off the table.

The couple says the hospital has yet to apologize to them and want to know if their daughters’ hemorrhage, which was on the left side of her brain, was because of her low birth weight or caused by her being dropped on the head. The newborn had a grade 1 germinal matrix hemorrhage and was required to stay in the NICU for twelve days.

The parents are asking users to share the video of the newborn to “prevent this from happening to the children being born at this hospital.” Dignity Health Chandler Regional Medical Center released a statement, reading,

“Because of patient privacy laws and a request from the family not to release information, we are unable to comment specifically on this matter. The safety of our patients and their families is always our top concern. The medical team at Dignity Health Chandler Regional Medical Center takes this matter extremely seriously and is working to conduct a comprehensive review.”

I really hope the hospital has a good lawyer because things aren’t looking pretty good for them. This isn’t a ‘slide under the table’ situation. A newborn was dropped, and it could have been fatal. Her body was literally half off the table. You’re not working with a sack of potatoes, here. It’s a newborn.