Very Short Man Has an All-Time Meltdown At Women About How They Disrespect His Height, Gets Tackled 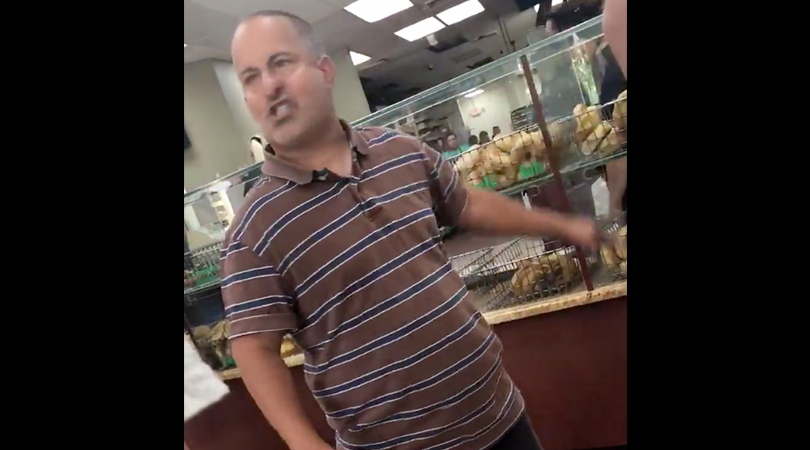 Here’s the misleading thing about the term “Napoleonic complex”: Napoleon wasn’t actually short. That’s just a myth. Also, historically he was a badass soldier and general who won most of his fights. The man in the video below raging against the women working and shopping at the bagel shop he’s in — as well as women in general, for good measure — definitely has a Napoleonic complex, even though he is not like the actual Napoleon at all.

According to onlookers, the man was apparently frustrated with the service at Bagel Boss in Bay Shore, New York, and his frustrations quickly devolved into some sort of wild conspiracy outburst about how all women hate him because of his height. (Probably the case, his personality is obviously flawless.) The man then started screaming at all the customers, challenging one man to a fight before another guy put him on the ground.

so in bagel boss this morning, the misogynistic douchebag seen in the video was degrading almost all of the female staff as well as other patrons. fuck this guy. pic.twitter.com/LZh1Uk4UXZ

Folks we’ve got another angle!pic.twitter.com/qJ8Eu7ci5w

You almost want to feel sorry for the short guy. I (almost) do, anyway. We don’t know what kind of day or week or month or life he was having (though he did potentially give us a bit of a glimpse into the latter). But you just can’t drag innocent bystanders into your crap like that. The bagel lady who had to get up practically the night before because her shift started at the asscrack of dawn does not deserve to be bothered and screamed at because some other lady wouldn’t slide your shorts down the eight inches between your waste and the ground and play with your hopefully not proportionate to your height penis.

That’s a you problem, tiny. But the real reason not to feel sorry for this turd is actually because he apparently does this all the freakin’ time.

Those are all from his YouTube channel. There are more, even, but they’ve been removed since he gained some public attention. So yeah, this guy sucks.