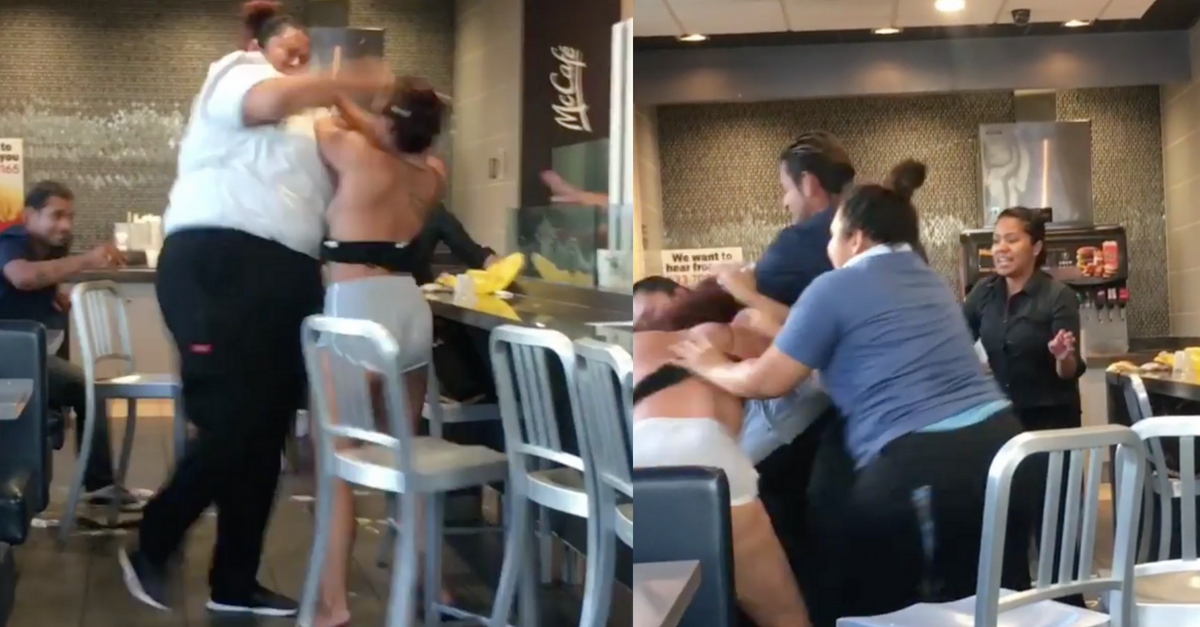 Think you can use a water cup to steal free soda at this Las Vegas McDonald’s? Think again, motherf*cker.

Actually, based on the personal nature of the insults exchanged before, during, and after this ferocious McBeating, there is probably a little bit more to this story than the woman customer simply attempting to scam some free Orange Hi-C and a female McDonald’s employee going full momma bear to protect the integrity of the soda machine. That is, however, what the Instagram post and the Daily Mail alleged.

But, let’s be honest, are details and backstory really necessary when there’s a video of a fast food worker and a fast food customer hurling milkshakes, metal trays, fists, and profanity at each other to be watched? No, they are not.

So here is that shocking video, from Instagram user @bxbyness.

This is what social media was invented for. Truly just a savage, one-sided, wild brawl. Its result was unsurprising, all things considered. First and foremost you have the size difference between the combatants. That alone made the outcome basically inevitable.

Even if the two women were in the same weight class, however, it’s unlikely the customer would’ve come out the victor. That McDonald’s employee is at work. At McDonald’s. She’s been dealing with bullshit all day. Jerk customers have probably been talking to her, both in person and through the drive-thru speaker, like she was the village idiot. A coworker, probably named Darryl, has been messing up simple orders all day. And then the jerk customers have been doubling down on their borderline inhumane condescension toward her because Darryl keeps messing up orders.

This McDonald’s worker was already in the mood to kill.

The customer, meanwhile, looks like she just rolled out of bed. Sure she’s pissed off in the video, but she’s probably had an overall low-stress day. Certainly more so than the worker. She had no shot. Regardless of the many factors that contributed to the result, though, the lopsidedness of this fight is still pretty stunning. That customer got tossed around like a rag doll. The McDonald’s worker body-slams her into a nearby table with such ease it’s like she’s dropping an apple pie into a to-go bag.

The customer was helpless. It was like watching a house cat trying to fight a bear.

Somehow, though, the oddest part of this entire video is the aftermath. Everyone just… goes back to doing what they were doing? You’d think the customer runs out after that. But no. She keeps eating! Maybe she was trying to use a free water cup to steal soda. You have to be that level of cheap and/or desperate to suffer that much indignity and physical pain and still refuse to walk out on four dollars worth of terrible food.

Leave! Also, the cops might be coming. You started the fight, lady. What are you going to say to the police officer questioning you? “Yes officer, I know I both physically and verbally initiated the fight, but I also lost the fight. So arrest her instead.”

All in all, this fight over free soda was an inspirational display of humanity.