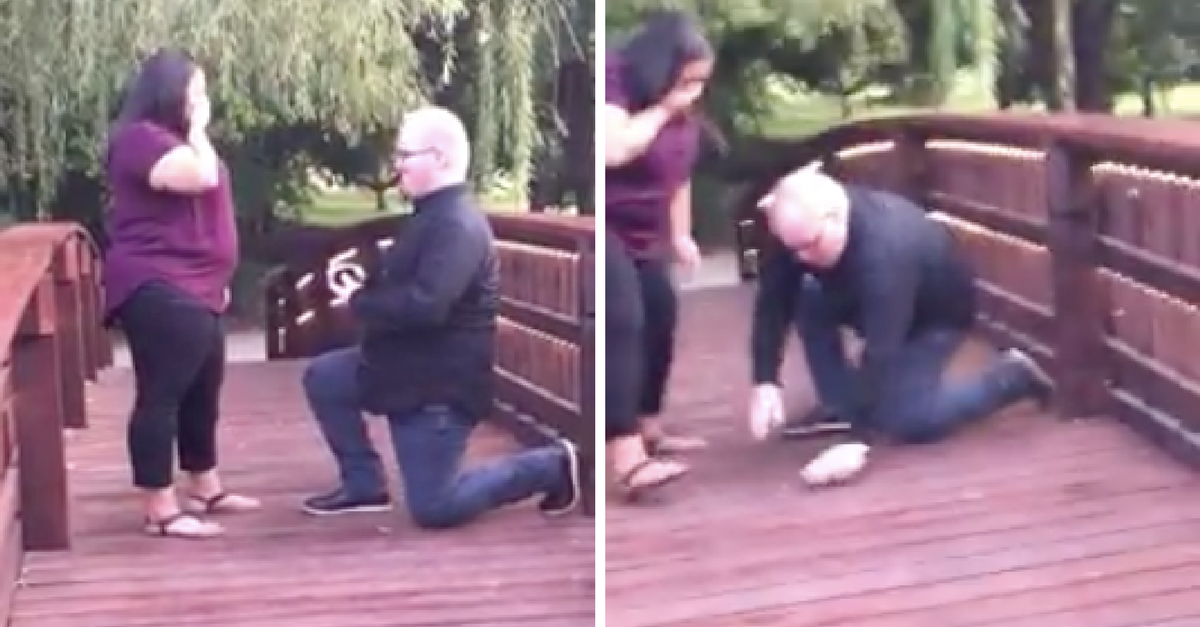 A Missouri couple ended up in a pond and a roller coaster of emotions after the boyfriend’s attempt at a romantic proposal on a bridge went horribly wrong. And the whole thing was caught on camera by Staci Dabney, their wedding photographer.

Seth Dixon was proposing to his girlfriend Ruth Salas on an early Saturday evening, on top of a bridge overlooking a pond in a beautiful park. However, the $3,000 engagement ring popped out of the ring box mid-proposal and fell through the bridge’s wooden slats into the water with a horrifying plop.

In the footage of the proposal, Dixon can be seen getting down on one knee and then frantically patting the ground after the diamond engagement ring falls. A shocked Salas covers her mouth with her hands in a mix of surprise and horror.

The couple and their friend Maddie Villareal, who filmed on her cellphone, what was supposed to be a touching engagement all hopped in the water to search for the diamond ring. When they didn’t find it, they returned the next day with more friends and family for another entire ring search. Even with a metal detector, their search was still unsuccessful. The couple was set to get married in October 2017, and a GoFundMe page has been set up to help them pay for a new ring in replacement of the lost ring.

Unfortunately, no money was actually raised, but that didn’t stop Salas from giving her answer; she said yes. I wish all the best for this couple, and hopefully they don’t believe in superstitions that something like this could set off the way the rest of their marriage will be like. But it’s definitely the thought that counts, and I think Dixon was truly doing the best he could.