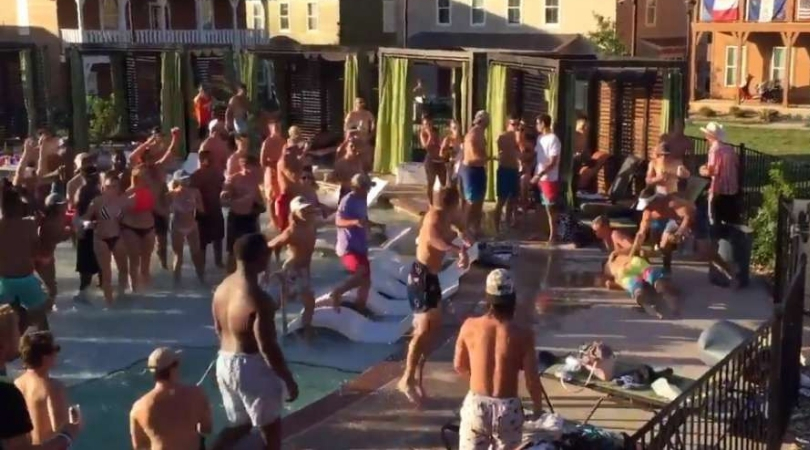 “Hey Bro! Did you drink the last Natural Light, Bro!?” “Yeah, Bro, you got a problem?” Punch. Punch. Punch. Punch. Loud noises! Yes, this is exactly how the fight started. Totally kidding, maybe it wasn’t those words precisely, but it definitely looks like it.

Let me explain. A pool party in a San Marcos apartment complex got a little too rowdy after a fight broke out that involved a lot of testosterone and hilarious air punches. Lucky for us, it was ALL caught on video. The 40-second clip was posted by @Dj_SaucedUp (Dear God, what’s with these names?) who was attending the pool party with other Texas State University students and decided to grab his phone and record the whole scenario.

The fight took place at Capstone Cottages, which typically houses Texas State University students. The video starts off with two men exchanging some words (the ones at the beginning, for sure), later throwing some ‘wild’ air punches and a mega tackle knocking down a trashcan. The fisticuffs quickly evolve into a brawl with at least 5 other men. The fight seems to get a bit aggressive where even at one point, a bro gets hit so hard that he is sent backwards into the pool! The video then ends as both parties continue shouting at each other.

According to the San Marcos director of communications Kristi Wyatt, the city knows the brawl took place, but “there were no calls for service to the San Marcos Police Department” in regards to the fight. Because duh, bro’s don’t snitch out other bro’s.

Despite the lack of intervention from authorities, the news of the pool fight spread quickly along social media. What surprised me the most about this whole thing was the fact that the multi-man brawl seems to be encouraged by other people surrounding it, rather than actually trying to stop it.  Oh, how I miss college.