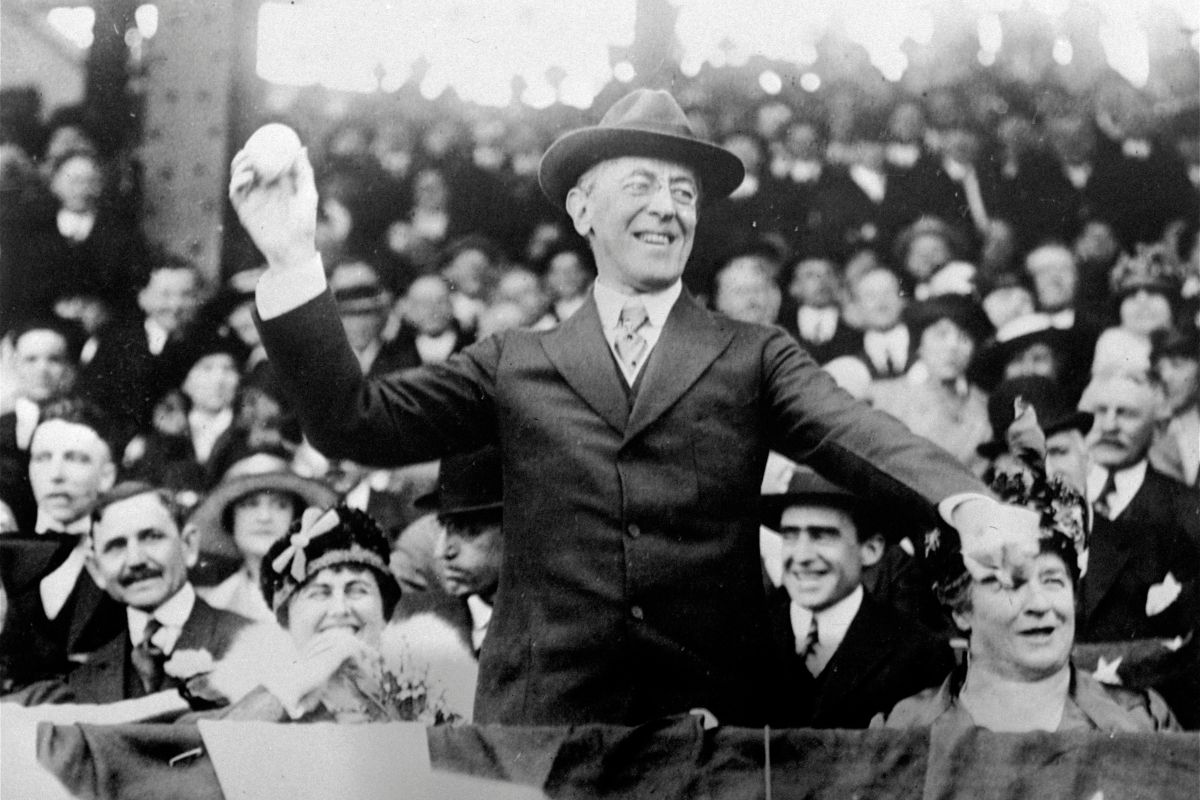 President Woodrow Wilson is most remembered for leading America through World War I and founding the League of Nations, the first international governmental organization. But the Democrat was also a white supremacist who believed deeply in the “Lost Cause of the Confederacy” and celebrated the Ku Klux Klan… so much so that he wrote a book about it, which inspired The Birth of a Nation. The film ultimately led to the terrorist groups’ 20th century revival.

Woodrow Wilson was born in antebellum Virginia in 1856 and lived in Georgia throughout the Civil War. The ethos of his Southerner heritage is clearly expressed in A History Of The American People, the five-volume textbook which Wilson wrote and published in 1901. The “academic” work lauds what’s come to be known as the “Lost Cause” narrative of the Civil War: a view which romanticized the Confederacy, emphasizing the states’ rights defense, and softened the image of slavery. Unsurprisingly, Wilson also believed in segregation, vehemently opposing civil rights throughout his time in the federal government.

Ten years after the publication of A History Of The American People, Woodrow Wilson became the president of Princeton University, his alma mater, then went on to be elected the governor of New Jersey. He served for just two years before running for president of the United States. Wilson won the 1912 election, against Republican incumbent William Howard Taft, former Republican President Theodore Roosevelt — running his third party “Bull Moose” campaign — nominee, and the historic Socialist Eugene V. Debs.

Woodrow Wilson remained in office until 1921. During that time, he saw America through World War I, crafted the League of Nations, negotiated the Treaty of Versailles, and eventually ratified women’s right to vote. He also hosted a screened what is arguably the most racist movie of all time, proudly, in the White House.

‘Birth of a Nation’

D.W. Griffith’s 1915 film, The Birth of a Nation has been called “the most controversial film ever made in the United States.” At the time, the silent film was celebrated for its technical advancements: clocking in at nearly three hours, it was the longest 12-reel film ever made and utilized brand-new film concepts like close-ups, fade-outs, extras, and even the inclusion of an intermission. Additionally, the movie was accompanied by an orchestral score and a 13-page program. For these reasons alone, Birth of a Nation was a highly publicized and historic accomplishment. In reality, the cutting-edge special effects were being used to emphasize a story that was appallingly racist.

The Birth of a Nation was adapted from Thomas Dixon’s play, The Clansman, and has a maximal plot: two opposed families clash throughout the Civil War and Reconstruction era, along the way pitting white men against black men seeking to defile white women. The African Americans pictured are played mainly by white actors in blackface and portrayed as brutish and sexually violent. Finally, the Ku Klux Klan steps in to save the day and restore a white supremacist social order to the broken community. The hero was called the “Confederate Klansmen.”

Being a silent movie, contextual cue cards were also spliced into the drama — and some of these were direct quotes from Woodrow Wilson’s Confederate textbook, A History Of The American People. (And FYI: D.W. Griffith’s inclusions skip over Wilson’s more colorful, derogatory language.) Delighted to take part in the cinematic “achievement”, Wilson screened the blatant propaganda in Washington, D.C. at the White House. It was the first movie ever to be screened there. And his decision to do so set the wheels of reanimating the Klan into motion.

Emboldened by the success of Birth of a Nation, the Ku Klux Klan experienced a major revival. During the Reconstruction that followed the Civil War, the first iteration of the Klan arose to become a formidable organization of the South. Using voter intimidation tactics and targeted attacks on African-American leaders, the KKK sought to halt the Republican-led effort for Reconstruction. But by 1871, this group was suppressed to the point of dissolution. But in 1915, after the release of Birth of a Nation, the second Klan started in Georgia and grew to larger urban swaths of the Midwest and West. This growth was due to new marketing techniques, inspired by the mythologization in The Birth of a Nation. That cycle of the Klan lasted, technically, until 1944. In 1950, the version of the KKK that still terrorizes America today was founded.

Screening The Birth of a Nation in the White House made clear Woodrow Wilson’s ideological stance: that African Americans are inferior. But Wilson’s racism was never a secret. In addition to penning A History Of The American People long before his presidency, the politician was an ardent segregationist. His racist beliefs were not just symbolic; they defined his political action. And they were not a product of his time. During his terms as president, Wilson — and other Southern Democrats — actively fought back against progress that had previously been made for black employees in the civil service industry. The NAACP and various religious groups all spoke out at the time against Wilson’s dangerously racist agenda.

When I was in high school, I learned about Woodrow Wilson’s troubling legacy. But certainly, his deep connection to the KKK is not a standard part of most curriculums. However, as we culturally re-examine many historical figures — particularly in regards in their namesakes — Woodrow Wilson is an obvious candidate for “cancellation.” Fittingly, in June 2020, Princeton University announced that Wilson’s name would be removed from its School of Public and International Affairs.