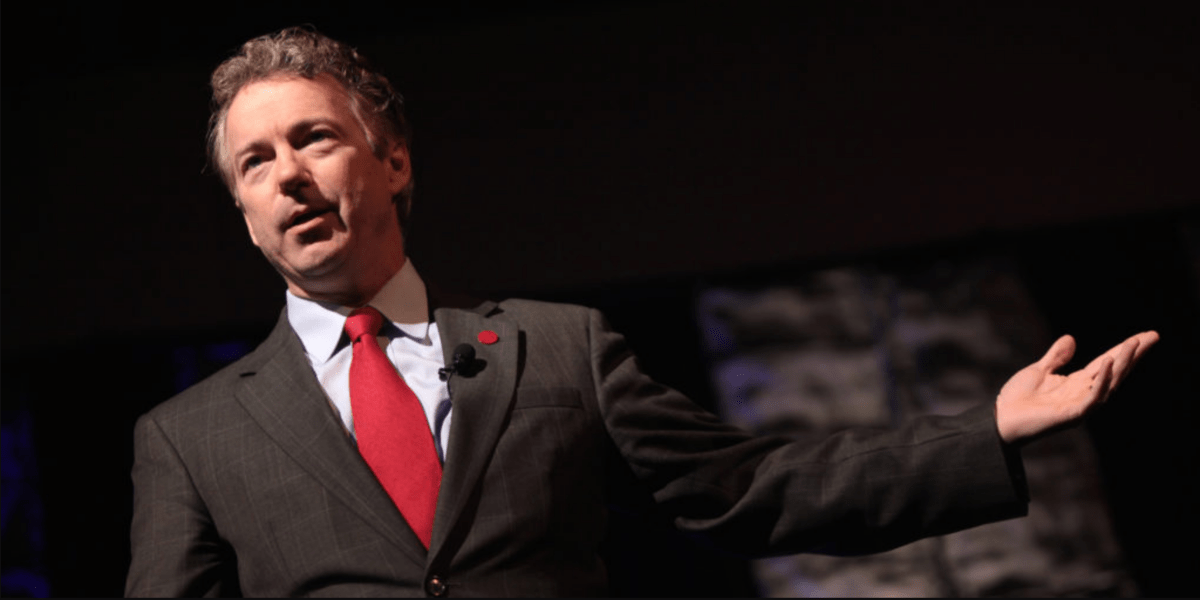 When Rand Paul held up the Republicans’ monstrous spending bill last Thursday with a mini-filibuster on the Senate floor, an anonymous GOP Senate aide told The Hill, “He’s all about grandstanding.”

Most Republican senators (except Mike Lee) appeared to believe pretty much the same thing: that Paul was needlessly holding up regular congressional business in the face of another government shutdown purely in the name of self-promotion.

Was Paul’s “stunt” to his political advantage? Sure. There was a lot of conservative support for his stance (it might shock some to learn this, but most of what elected representatives do usually has something to do with gaining support). But it’s also intellectually dishonest to dismiss Paul’s act as mere self-promotion when you consider that so many voices across the ideological spectrum seemed to agree that yes, the senator was essentially right about everything he was saying.

“People who call Paul’s speech ‘grandstanding’ might be correct, but that doesn’t change the fact that all of his words were correct, too,” wrote National Review’s Katherine Timpf in a column titled “Rand Paul Is Right.” “When Barack Obama was president, Republicans were constantly arguing that government spending was out of control, and that the debt was too high,” Timpf continued. “In fact, these kinds of arguments were basically the party’s entire identity.”

CNN’s left-leaning Chris Cillizza agreed with conservative Timpf that “Rand Paul was right,” writing, “Paul’s speech … was a savaging of his party — a party that appears to have turned 180 degrees from the deficit hawks of the mid 2010s who insisted that government spending was ballooning out of control and was crippling the country.”

“The simple fact is that Republicans in the Obama era defined themselves primarily as committed to reducing government spending and shrinking the nation’s debt,” Cillizza continued. “Every major Republican leader talked about debt and deficit relentlessly.”

Much backup was given from both conservative and liberal perspectives about Paul’s rightness on Republicans’ about-face on spending, with most of these takes separating the senator’s larger point from whether or not one agreed with holding up the bill.

So, if many agreed that Paul was right, who was wrong?

The bulk of the Republican Party.

So, who has been grandstanding, exactly? A senator who held a mirror up to his own party for a few hours Thursday night? Or a Republican Party that refuses to acknowledge the fact that they have now abandoned their former opposition to reckless spending — a podium they pounded for 10 years?

The Cambridge Dictionary defines “grandstanding” as “acting or speaking in a way intended to attract attention and to influence the opinion of people who are watching.” Of course Paul wanted to attract everyone’s attention. He wanted as many people as possible to understand what a bunch of hypocrites Republicans are.

But those Republicans have wanted attention too — and for a hell of a lot longer. Since the Tea Party movement began at the end of George W. Bush’s presidency and the beginning of Obama’s, Republicans have sought votes by vowing to bring fiscal responsibility to Washington. When they couldn’t achieve this, they would blame Democrats. As Timpf, Cillizza and others have noted, if Republicans had an identity throughout the last Democratic administration, opposing Obama and his party was it.

Why wouldn’t Paul have pointed this out last week? How could he or any honest Republican have possibly ignored it?

The primary political theme of the book I had the privilege of co-authoring with Sen. Paul in 2011, “The Tea Party Goes to Washington,” was that reining in endless deficit spending — both domestic and foreign — had to be Republicans’ top priority. If Paul had not protested the spending bill last week — or worse, voted for it like almost every other Republican — I would have had to ask him, “Why did you even write that book?”

Instead, as Paul explained in an op-ed at Time, “I hope this causes fiscal conservatives across the country to pay careful attention to this Congress.”

“Turning on the lights is necessary to expose what is going on in the darkness,” Paul added. “[I]n Washington, nothing moves unless it’s pushed.”

And if that happens, the Grandstanding Old Party will deserve every bit of it.