A Look Back at ‘Deliverance’s’ Iconic ‘Dueling Banjos’ Scene 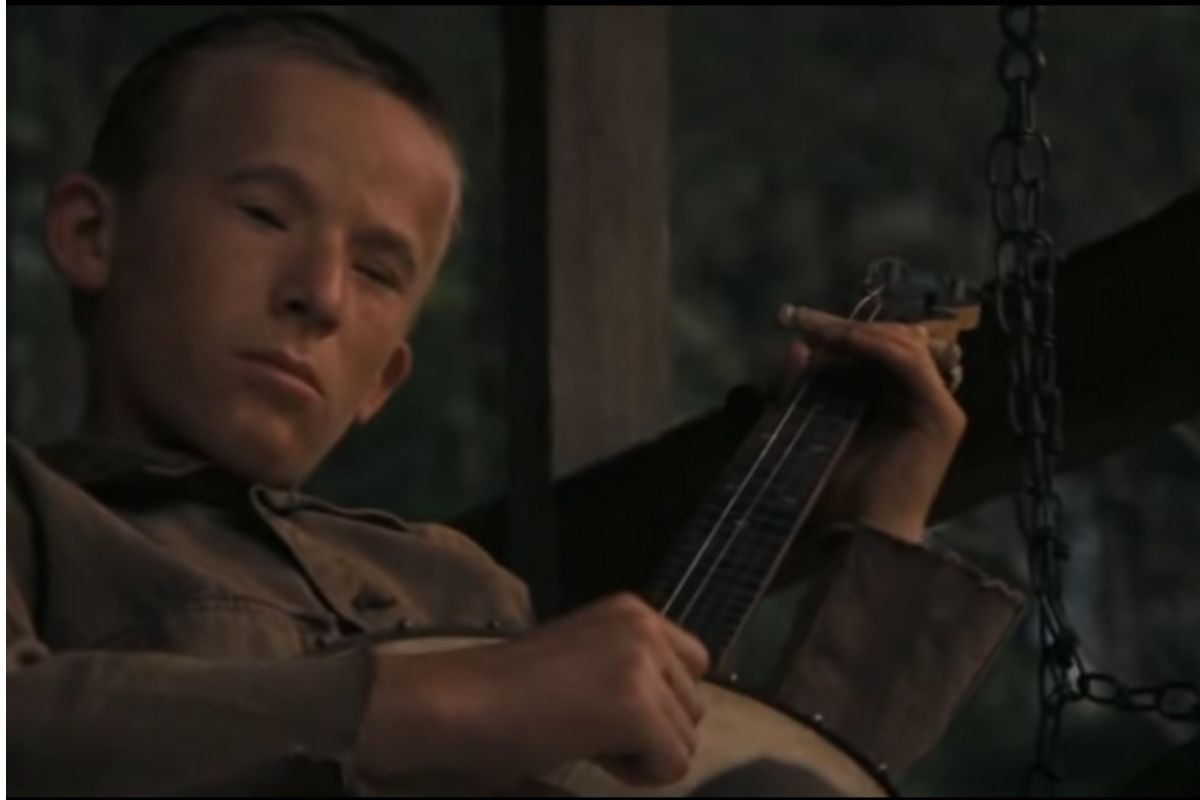 The movie Deliverance is unforgettable for an especially evil scene. You know the one: “Squeal like a pig.” But Deliverance also brought to life “Dueling Banjos,” a bluegrass tune first composed in 1954. As a spontaneous duet between an Atlanta businessman and a provincial local boy, “Dueling Banjoes” introduced audiences to the eerie, rural Georgiad setting. The song reemerges as a complicated theme throughout Deliverance, distinct strings flashing back to the group’s wholesome (naive) expectations for their voyage downstream.

Deliverance is about the devastating canoe trip of four Atlanta professionals trying to hack it in the country. The enthusiastic Lewis, played by (a perpetually sleeveless) Burt Reynolds, leads his friends into the wilds of Northern Georgia before the Cahulawassee River is dammed. Jon Voight as Ed has a bit of Lewis’ survivalist streak, but newcomers Bobby and Drew are in over their heads completely on the camping excursion.

Drew was played by Ronny Cox, a talented guitarist who made his on-screen debut in Deliverance. As Drew would later find, he did not have what it takes to survive. His only moment of true enjoyment on the trip was at their first stop: a backwoods gas station. While Bobby (an oafish Ned Beatty) spends time condescending to the poor locals, Drew strums his guitar and garners notice from a striking young banjo player, Lonnie. Lonnie, played by Billy Redden, appears mute and even inbred. Director John Boorman scouted Redden at a nearby Georgie high school. Although the first time actor was perfectly healthy, Boorman felt his unusual appearance fulfilled what the Deliverance script described as “inbred.”

“Dueling Banjos” unfolds between Lonnie and Drew like a conversation. With nothing in common, the pair banters without words through flipping camera angles. Lonnie, reticent at first, picks up the tune slowly, complete with a Yankee Doodle fakeout — before revealing the scope of his talent and jamming out “clawhammer” style. Delighted, Drew follows suit, and “Dueling Banjos” plays in its entirety. For a moment, the gas station seems like a peaceful place. Bobby claps along (offbeat). An old man dances a jig. Another local whistle happily. It’s the only calm scene in Deliverance, as the tender, the temporary union between Drew and Lonnie inspires the crowd. But the pastoral enchantment covers for a community with sinister intentions. In turn, the hubris of the “city boys” that view locals like authentic props will be violently punished.

Billy Redden could not play the banjo. (Following the popularity of Deliverance, he played a “Banjo Man” in Big Fish but never actually learned to play.) In order to film alongside Ronny Cox, who really played, Redden wore a special shirt that allowed local musician Mike Addis to strum the instrument, hiding his own arms in Redden’s sleeves.

The History of “Dueling Banjos”

Although Deliverance surged “Dueling Banjos” to popularity — it charted #2 on the Billboard Hot 100 for four weeks (second only to Roberta Flack’s “Killing Me Softly with His Song”) — the song did not originate with this country thriller. Esteemed musician Arthur “Guitar Boogie” Smith composed the instrumental in 1954 and originally performed it with bluegrass banjo player, Don Reno. In 1963, the song gained wide recognition when it featured prominently in an episode of The Andy Griffith Show: “Briscoe Declares for Aunt Bee.” On Andy Griffith, “Dueling Banjos” was played by a visiting musical family called The Darlings. (The Darlings were actually portrayed by real-life Bluegrass band, The Dillards.)

The Deliverance film version of “Dueling Banjos,” altered from Arthur “Guitar Boogie” Smith’s original, was arranged and recorded by Eric Weissberg and Steve Mandell. However, the filmmakers did not credit fully credit Smith, leading the songwriter to sue Warner Bros. And win. Smith finally received proper crediting as well as handsome royalties. And while the musician never revealed just how much he made off the hit, he did buy a yacht following the lawsuit. In 2014, Arthur “Guitar Boogie” Smith died at the age of 93.

In the 48 years since Deliverance premiered, audiences have been gripped by the grand, failed experiment in American masculinity. And though the film’s events turned this fun banjo tune into a dark reminder for Ed, Lewis, Drew, and Bobby, it did not stop “Dueling Banjos” from entertaining the nation, on and off-screen.