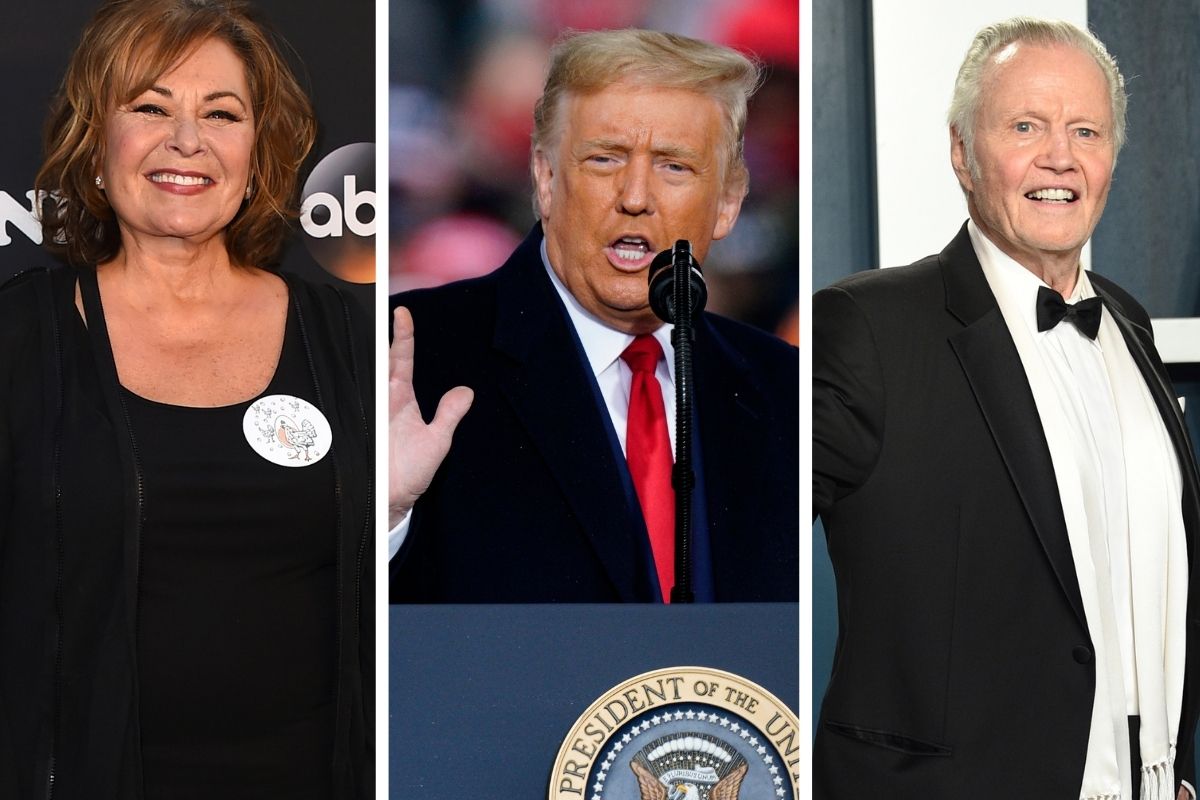 November 3rd is just around the corner which is why several Americans are preparing to head to the polls for what has been a very divisive and tough presidential election. Although most celebrities are open about supporting Joe Biden and running mate Kamala Harris, there are also several famous faces who are firmly in support of the Trump-Pence campaign. According to FiveThirtyEight, after the Presidential debate, Democratic nominee Joe Biden is ahead nationally by an average of 9 percentage points, and Real Clear Politics puts Donald Trump behind by an average of 8 percentage points.

According to Fox News, Joe Biden is currently leading Donald Trump in Texas, which is a state that has consistently voted Republican for the last 40 years. But, just one week ago celebrities were showing their support for both sides of trying to convince their fans to vote for their political party, here are the guest list celebrities that have endorsed President Donald Trump for a second term.

Roseanne Barr has been very vocal about her support for President Donald Trump since before his election and has frequently voiced support for the former apprentice reality tv star. She has been very vocal on Twitter, sometimes deleting her tweets after receiving multiple backlashes from Twitter users. However, the star still shows her affection for Trump such as when she shared a photo of herself wearing a red hat reading Trump 2020, in which she captioned the photo ‘2020 vision.” The actress was previously fired from her own show “Roseanne” (reboot) back in May 2018 after she tweeted racist statements about former White House adviser Valerie Jarrett.

To my fellow Americans. Part 1. pic.twitter.com/srw4zXCRKJ

Back in May 2019 Jon Voight, who is Angelina Jolie’s father, announced his support for the president of the United States in a two-part video explaining why he was the ?greatest President since Abraham Lincoln.? He has since continued to share frequent videos on Twitter and other social media pages in which he promotes President Trump, the GOP, conservative values, and the Republican Party. In July he had urged his Twitter followers to vote to keep President Donald Trump in office reaffirming his support for the politician and bashing on Joe Biden. He stated, “Biden is evil. Trump must win. He’s real. He will bring back the people’s trusts.”

The youngest of the Baldwin brothers, and father of Hailey Bieber, is a longtime supporter of Trump and has spoken out against his older brother Alec Baldwin’ss famous Saturday Night Live impression of the president throughout the years. Stephen, who is a former Celebrity Apprentice contestant, was a keynote speaker in October 2019 for the second annual dinner, which was hosted by Villagers for Trump in the state of Florida. Earlier this month, on the same day Hailey endorsed Biden, Stephen tweeted, “Don?t talk much about family, pray 4 everyone every day! In my beauty of ‘land of #free home of #brave’ is … reverence 4 our freedom, importance of clarity of vote? (vision goal truth intent) Many are called, few are chosen! Gospel is truth battle already won #Trump2020.”

Earlier this month, actress Kristie Alley faced several backlashes when she voiced her support for Mr. Trump, tweeting about her intentions to vote for the Republican on November 3rd. The longtime Trump supporter took to social media to tell her followers that she will vote for the president again in 2020 because ?he is not a politician.? The actress stated, “I?m voting for @realDonaldTrump because he?s NOT a politician. I voted for him 4 years ago for this reason and shall vote for him again for this reason. He gets things done quickly and he will turn the economy around quickly. There you have it folks there you have it.”

The Cheers alum also shared her previous voting history on Twitter noting that she has backed both Democrats and Republicans over the years, voting for Barack Obama and then for Trump, which he plans to do again. Ever since her statement, she has been sparing with Twitter users who have been criticizing her choice accusing her of trying to make her career-relevant by endorsing President Trump, to which she has responded, ” Believe me the last words you?ll hear in Hollywood are ?Steven darling, Grab that list of Trump voters! Let?s get em in here and give ’em all jobs!!!?

It's going to be a fun one in Michigan today with @KidRock and @kimguilfoyle!

Another celebrity to endorse Trump is Kid Rock. The country rapper joined Presidential candidate President Donald Trump in his native Michigan for a MAGA fundraising event back on September 14th in support of his re-election. He appeared alongside the Commander in Chief?s son Donald Trump Jr. and his girlfriend Kimberly Guilfoyle. Guilfoyle is also Trump Campaign Senior Adviser in Harrison Charter Township Michigan for the Make America Great Again event. The singer has since been a long vocal supporter of Trump, having visited him in the past in the White House and enjoying rounds of golf together in the past.