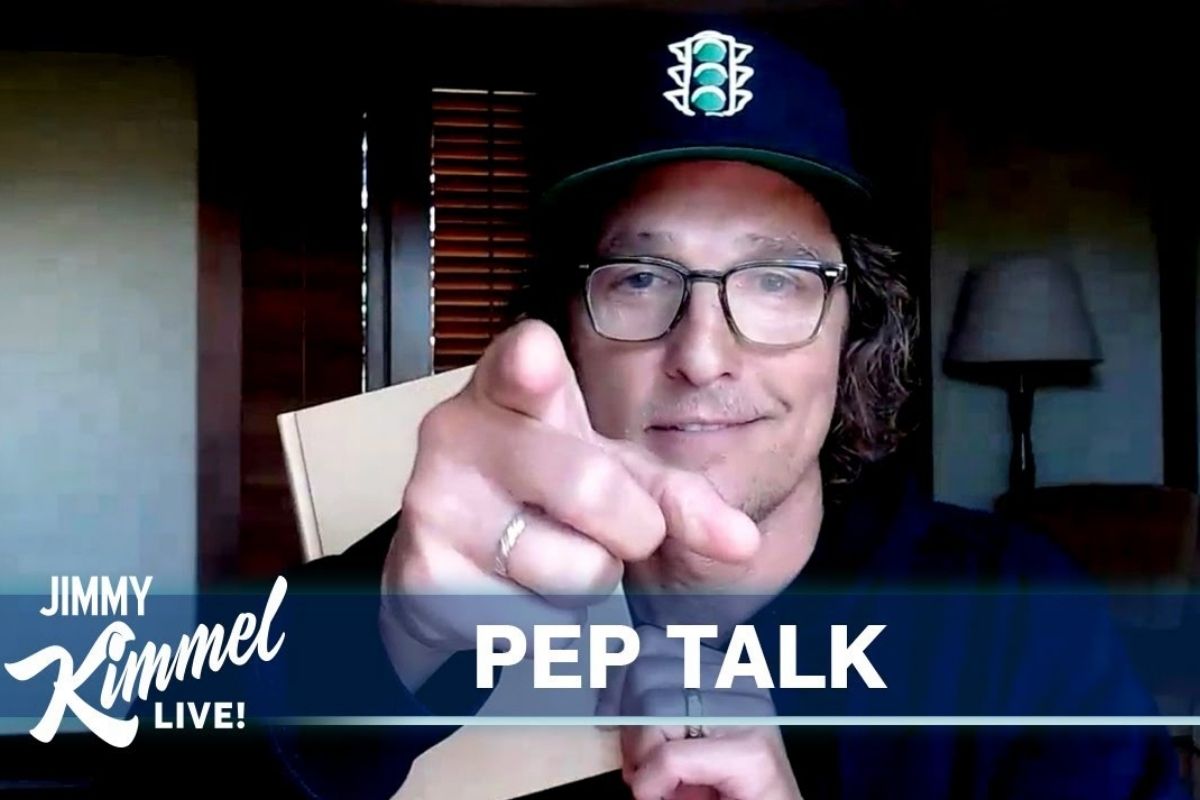 During an interview with Jimmy Kimmel on Jimmy Kimmel Live, Texas heartthrob Matthew McConaughey gave the world a little bit of a pep talk! The actor went on the show to discuss how he and his family are doing during quarantine, and his new memoir, Greenlights, which is filled with crazy stories. The actor discussed doing peyote with a mountain lion, his dad questioning whether McConaughey’s paternity, building a whooping 100 feet treehouse when he was a child, and about his adopted brother meeting his birth parents. Seems to me like McConaughey needs a Netflix show of his own.

During the late show interview, McConaughey being McConaughey also had a short but sweet pep talk for America about the COVID-19 pandemic and the uncertain and hard times we are going through. The Hollywood actor admitted that ?2020 has been one for the books,” saying it “is time to turn the page and clear our eyes so we can better see. Time to anchor ourselves to our better natures and redefine some of our nomenclatures.” The actor also noted that it was time to respect not only ourselves but for others. It was a time to remember our value.

“Listen to Our Mother”

“Time to listen to our mother. Let?s make a meeting in the middle of our journey?s junction. We got to start blessing up instead of bowing down to all that funny money wearing the crooked crown. We got to create opportunities for the I and the We,? he added. ?Time to come together to wear a mask and vote. Let?s turn this red light green.”

Just this week, it was announced that the cast of Dazed and Confused was getting together for a virtual reunion. On October 11, McConaughey, Hollywood actor Ben Affleck, director Richard Linklater, Anthony Rapp, Jason London, Parker Posey, Joey Lauren Adams, Adam Golberg, and more joined the table in support of March for Science and Voto Latino Foundation. According to the fundraising website, the foundation is a dedicated space to empower communities through civic engagement and issue advocacy.

Shoutout to the cast of Dazed and Confused for helping us get more Latinx voters registered! ✨https://t.co/GyPljZl8bM

Those who want to attend the special event will need to make a donation, but there is a minimum amount set. The special script reading will take place on Sunday, October 11, at 7:30 PM EST. You can donate and get your access link here. Dazed and Confused was released in 1993, written and directed by Richard Linklater. The plot follows a group of Texas teenagers during the last day of school in 1976.

Petition to have Matthew McConaughey on all late-night talk shows until this whole pandemic is done?