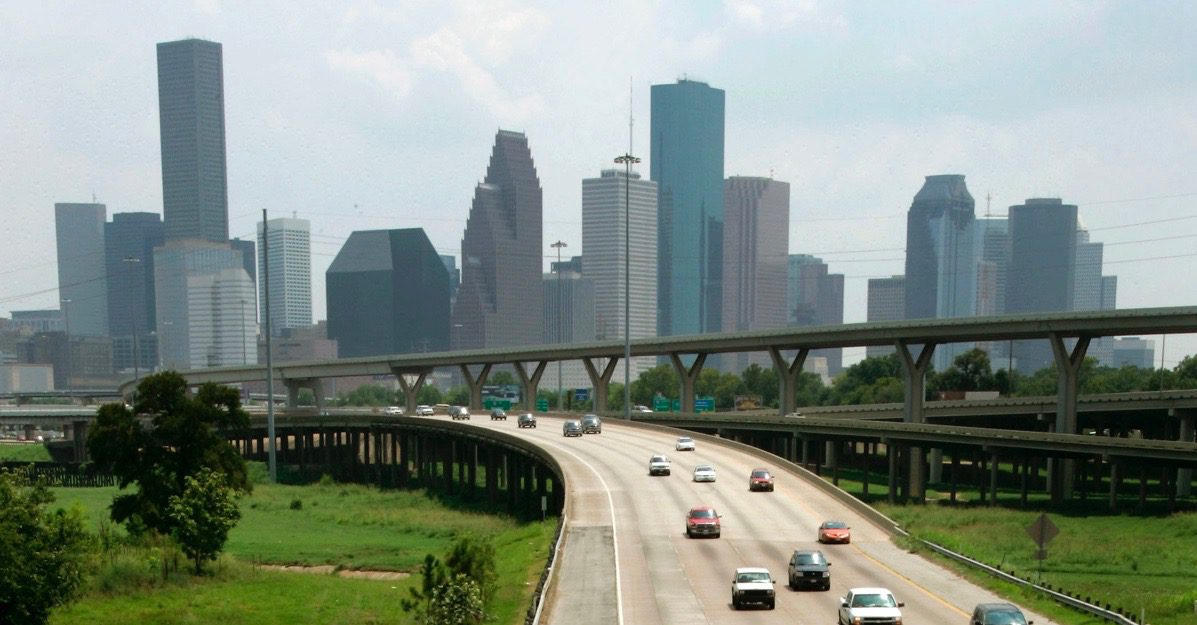 AP Photo/David J. Phillip
Traffic travels north out of downtown Houston on Interstate-45, Saturday, Aug. 6, 2005. For Houston, a federal transportation funding bill, includes $245 million to expand public transit, and another $23 million to make the freeways look better. The city also will take in another $5.5 million in projects to make it easier to walk and bike around the city. (AP Photo/David J. Phillip)

A new book from a Rice University professor is examining how the freeways criss-crossing and encircling Houston shaped the city’s history.

“Power Moves: Transportation, Politics, and Development in Houston,” published by the University of Texas Press in December 2017, is described at a look into how Houston went from having a single highway in 1950, to its network of freeways, toll roads and interstates today.

Author Kyle Shelton, who received his doctorate in American history from UT-Austin, also leads the Urban Development, Transportation and Placemaking program and the Urban and Metropolitan Governance program at the Kinder Institute for Urban Research at Rice University.

RELATED: These Videos of Houston Traffic Prove Even Traffic is Bigger in Texas

“Houston, along with Phoenix and Los Angeles and several other sunbelt cities, really grew around the transportation infrastructure they built in the early post World War II era,” Shelton said in an interview with the Texas Standard.

His book also looks at the political wrangling he said led to freeways crossing through certain neighborhoods, while avoiding others.

For instance, Shelton looks at why Interstate 10 ultimately became built to pass through Houston’s Fifth Ward, a historically African-American neighborhood.

“In the 1950s and 1960s…from the wealthier suburbs to lower-income communities, no one really had a lot of communication with public officials who were designing this,” Shelton said further.

He claims changes in federal law in the 1970s opened up the debate to public comments and defused much of the alleged back-room political dealings behind the decision-making processes.

“It can’t be just highways or just public transportation,” Shelton also said. “Those two cannot be at loggerheads any more. If we want to be able to see a system that works for everybody and gives people lots of options, [then] giving lots of different folks from lots of different neighborhoods the time and space to participate… is key.”

Maybe try book on tape for your inevitable next car ride, H-Town.