Texas’ Senior Senator John Cornyn sets the record straight on where he stands on medical marijuana, sort of 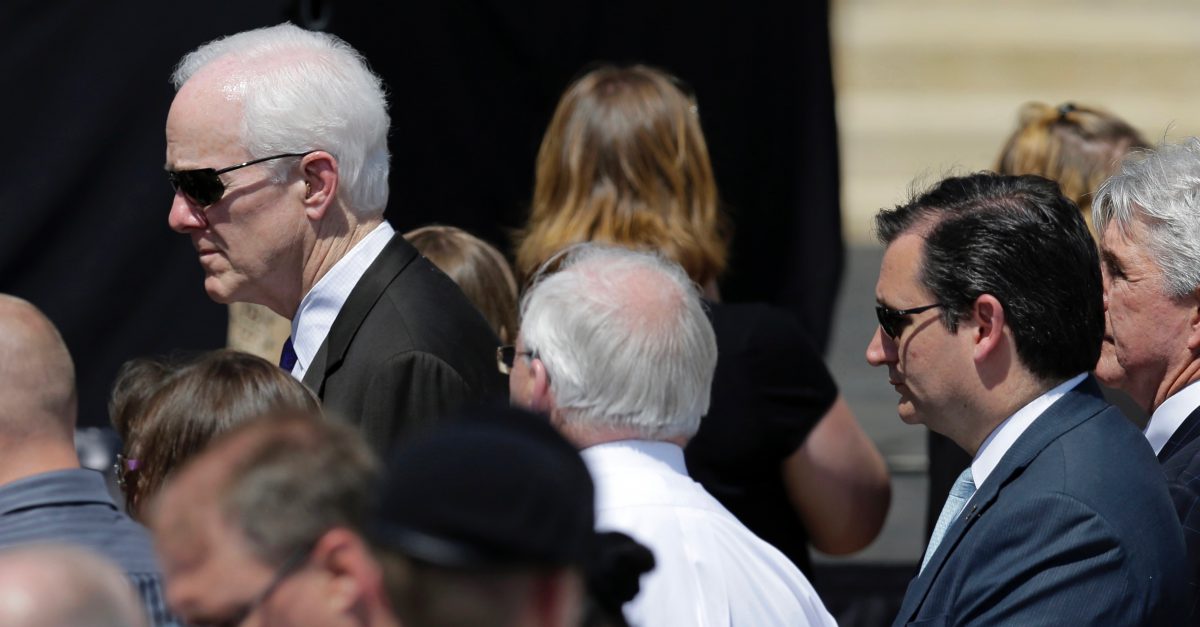 AP Photo/Eric Gay
Senate Minority Whip John Cornyn of Texas, left, and Sen. Ted Cruz, R-Texas, right, attend a memorial ceremony for shooting victims, Wednesday, April 9, 2014, at Fort Hood, Texas, where President Barack Obama spoke. The shooting rampage left four dead and more than a dozen injured. President Barack Obama is reprising his role as chief comforter as he returns once again to a grief-stricken corner of America to mourn with the families of those killed last week at Fort Hood and offer solace to the nation.(AP Photo/Eric Gay)

Many politicians make it their only job to be reelected back to office.

And part of these efforts often include interacting with constituents – the people who put them there in the first place.

Letter correspondence is a common method of communication with residents of their districts or states for Congressmen and Senators on Capitol Hill, a significant portion of which is mass form responses sent to constituents writing in on the same topic.

A majority of these letters are commonly written and sent by underpaid staffers, including junior-level interns, assistants, or legislative correspondents, many of whom are under 25 years old, working to write in the voice of their Member boss who may or may not ever read or acknowledge the text.

As a matter of resources, correspondence received from out-of-state citizens is usually forwarded to their respective representatives.

One Texas constituent recently received a response from Republican Whip and Senior Texas Senator John Cornyn to their letter submitted regarding the protection of “the right for states to set their own marijuana policies:”

While not uncommon for correspondence to be sent by email, many Members choose to stick to hard copy mail, especially with the threat of unauthorized digital modifications on the rise, as noted in the lower portion of the response.

Senator Cornyn’s letter did not address the issue directly of whether he believes states should be able to set their own marijuana policies, but it is clearly stated he supports the Supreme Court’s decision effectively prohibiting medical marijuana.

Furthermore, his voting record shows he believes legalizing marijuana would cause “similar attitudes to other illegal drugs.”

Keeping in touch with electors is less of a priority for some Members than others, but radio silence has proven fatal in the past.

A commonly cited concern among constituents who axed the five-term incumbent representative was Cantor’s absenteeism and lack of engagement with their direct issues in Virginia’s 7th District.

While not confirmed, it was also rumored on the Hill that Cantor and his staff had all but stopped responding to constituent mail for nearly a year before his loss.

This may be why, like Cornyn, Texas’ Junior Senator Ted Cruz also makes an effort to respond to the Texans writing in.

For example, as shared by thologop on his blog, the Texan wrote to Cruz regarding guns and received a response almost three months later:

Cruz’s response time is relatively average in the Senate, particularly for Members representing states as large and populous as Texas, but thologop seemed to be less than satisfied with the reply:

“I think he got all confused, poor thing,” the Texan wrote.  “(Maybe Laura Bush can help him out.)….Can’t quite figure out why I’m so upset right now.”

To his credit, the letter may have been sent by a lower-ranking staffer, but digital mix-ups like this are another reason some Senators choose to stick to traditional mail, and a paper trail may be the least of Cruz’s concerns as he gears up for his first reelection as U.S. Senator in 2018:

Not only is his office notoriously known on the Senate-side of the Hill for not answering his D.C. office phone, earlier this year, snarky Houstonians posted satirical ‘missing’ posters for Cruz around the city after he repeatedly refused requests to host an in-person town hall for constituents.

If you’d like to write your Senators and give them the wake-up call a few Texans passionately believe they could use, visit Senator Cornyn’s website here and Senator Cruz’s website here.

For more information on who represents you in Congress, including your House Member, visit Congress.gov.

Chana Elgin is a former U.S. Senate Legislative Correspondent.  Some information for this article was taken from firsthand knowledge and experiences of the author.