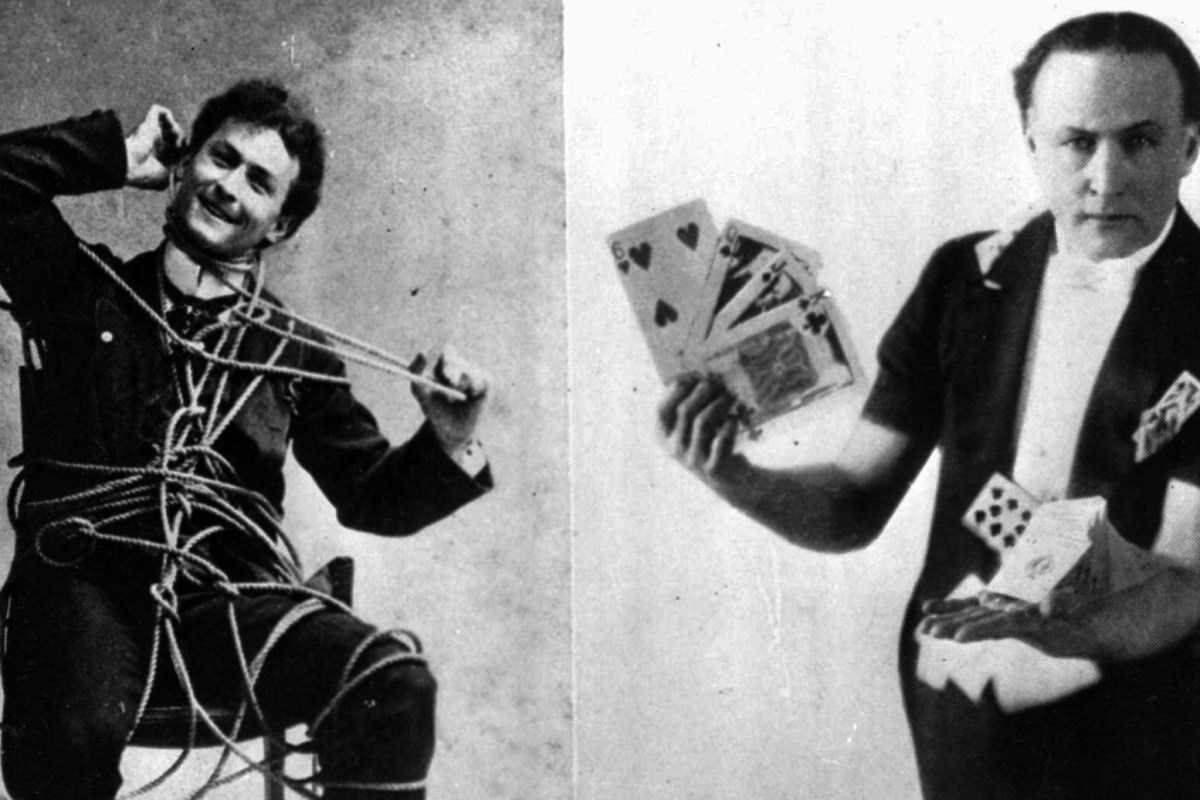 He’s the godfather of escapism and illusion, a magical mastermind whose tricks dazzle to this day. But how much do you know about the man in the handcuffs?

Here are 10 fun facts about the genius known as Harry Houdini.

Houdini was born Erik Weisz on Mar. 24, 1874, in Budapest, Austria-Hungary. His family immigrated to the United States in July 1878, settled in Wisconsin, and changed the spelling of their last name to Weiss. Young Houdini’s first named changed as well, from Erik to Ehrich.

The Weiss family eventually moved to New York City, where 9-year-old Ehrich took a job as a trapeze artist. He launched his professional magic career in 1891 and changed his name once again. “Harry” is a derivative of his childhood nickname, Ehrie, while “Houdini” is an homage to one of his idols, French magician Jean Eugène Robert-Houdin.

In 1893, he married Wilhelmina “Bess” Rahner, who would become his stage assistant.

Houdini got his big break in 1899, when he impressed manager Martin Beck with his ability to break out of handcuffs. Beck booked the Houdinis on the vaudeville circuit. They eventually took their escape show to Europe, where Houdini challenged local police in several countries to keep him restrained with shackles and locked in jail.

Beginning in 1907, Houdini’s American productions got bigger and more dangerous. They included escaping from a locked milk can filled with water; releasing himself from a straitjacket while dangling by his feet from a rope above a city street; and the famous Chinese Water Torture Cell, which forced Houdini to hold his breath for more than three minutes while getting out of a glass and steel cabinet overflowing with water, all while suspended upside down.

One 1915 trick nearly killed Houdini. He was buried alive in a dirt pit, then started to panic as he desperately clawed his way out. No one could hear his cries for help. His hand eventually broke free, and he was pulled to safety — and passed out once he was back on the ground.

It was not magic that ultimately brought down Houdini, but a ruptured appendix. He died of peritonitis in a Detroit hospital on Oct. 31, 1926, at age 52.

Magic wasn’t Houdini’s only talent. He founded his own film company, The Film Development Corporation, and starred in several productions. He was also an accomplished aviator who made one of the first aerial flights in Australia. He even taught American soldiers how to escape sinking ships and get out of ropes or handcuffs in case they were captured by the enemy during World War I.

And despite spending much of his later life debunking psychics and mediums, Houdini made a pact with Bess: if communication after death was possible, the first one to die would send the other a sign. For 10 years after his death, Bess tried to get in touch with Houdini every Halloween, but never received a reply. She gave up in 1936, reportedly saying, “Ten years is long enough to wait for any man.”