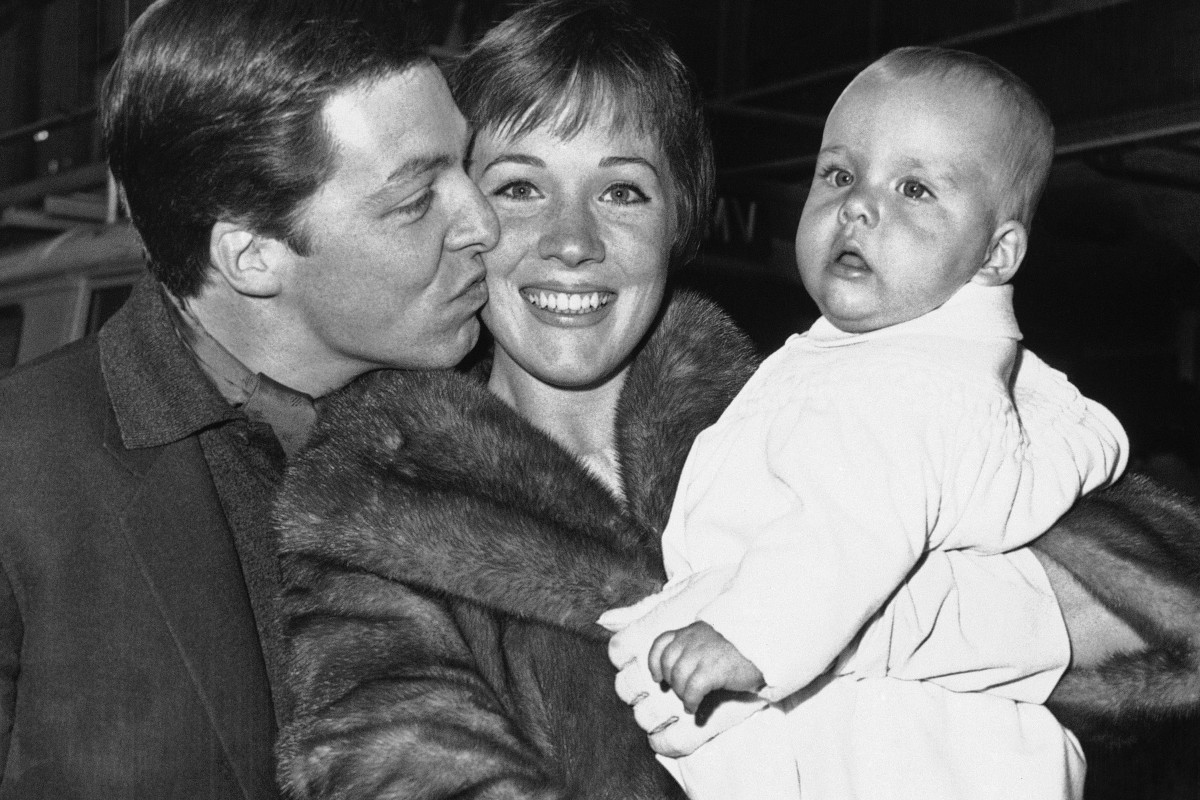 Emma Walton Hamilton’s earliest memory was formed when she was three years old and saw a Marry Poppins display at a department store. Emma pointed at the life-size cardboard cutouts of Mary Poppins and exclaimed to her nanny, “There’s mummy!” Two women who were also shopping in the store overheard Emma. “Isn’t that sweet?” one lady said to the other. “That little girl thinks her mother is Mary Poppins!”

Little did the two ladies know, Emma’s mom really is Mary Poppins — or rather, Julie Andrews, the actress that played Mary Poppins (as well as Maria Von Trapp in Rodgers and Hammerstein’s The Sound of Music). Emma is Andrews’ only biological daughter, though she wasn’t an only child. Emma had two adopted sisters and two half-siblings from her stepfather’s previous marriage. So what was it like growing up with the legendary Julie Andrews, who famously played the two most picture-perfect governesses in cinematic history? To find out, we took a peek at Julie Andrews’, big, blended family.

Having starred as the leading lady in the Broadway shows The Boyfriend and My Fair Lady, Julie Andrews was eager to hit the silver screen. She notoriously was skipped over for the movie version of My Fair Lady by director Jack Warner, who reportedly chose Audrey Hepburn to play Eliza Doolittle because she was more famous. Although initially disappointing, the decision ended up being fortuitous because it freed Andrews up to play Mary Poppins. (Later, after winning the Oscar for Best Actress and a Golden Globe for her work as the title role in Mary Poppins, Andrews actually thanked Jack Warner for not casting her as Eliza Doolittle and giving her a chance to play Poppins: “Finally, my thanks to a man who made a wonderful movie who made all this possible in the first place … Jack Warner,” she joked at the end of her speech.)

Nine months later, Emma was born. Andrews and her first husband, Tony Walton, headed to Hollywood to film Mary Poppins, taking Emma with them. Growing up, Emma would end up splitting her time with her father in New York City and traveling with her mom as her different roles took her to different parts of the globe. Growing up as Andrews’ daughter and attending different schools, Emma learned how to (and how not to) make new friends: “I finally found that if people found out who my mother was, they would tend to sort of want to be friends in order to get an invite over to the house,” Emma explained on Fresh Air. “So I learned to hide behind the name Walton, which was my – which is – was my maiden name and is my father’s name, for as long as I possibly could, so as to cultivate, hopefully, some real friendships before any of the other stuff became part of the relationship.”

Two years after divorcing their respective spouses, Julie Andrews married her second husband Blake Edwards in 1969. Edwards, a screenwriter, and director of Breakfast at Tiffany’s and the Pink Panther movies collaborated with Andrews on seven movies, including Victor/Victoria, S.O.B, and Darling Lili, throughout their marriage. Andrews’ marriage to Edwards created a blended family of Andrews’ daughter Emma and Edwards’ children from his previous marriage, Jennifer and Geoffrey.

Edwards passed away in 2010 after being infected with pneumonia. Andrews continues to look back on their marriage fondly, calling the union “a love story“. “I’m still dealing with [his death],” Andrews said during an interview with Good Morning, Britan. There are days when it’s perfectly wonderful and I am myself and then it’s suddenly—sock you in the middle of your gut and you think ‘ah God I wish he were here.’

A few years after their marriage, Andrews and Blake adopted their daughter Amy Leigh from Vietnam in 1974. The following year, they adopted a second daughter, Joanna Lynne, also from Vietnam. Both girls were infants from a Vietnamese orphanage during the war.

With a BAFTA, Golden Globe, Grammy, Emmy, Academy Award, and Golden Lion for Lifetime Achievement award under her belt, Andrews has taken a break from acting. She recently collaborated with her daughter, Emma, on a memoir called Home Work. The mother and daughter have also worked together to write several children’s books, including “Mandy” and “The Very Fairy Princess”. Earlier this year, Emma and her mom launched a podcast called Julie’s Library, where the two of them read children’s stories aloud — just in time to reach families in lockdown when the COVID-19 pandemic swept the globe.

Watch: Julie Andrews Talked About Her Near-Death Experience on the Set of “Mary Poppins”