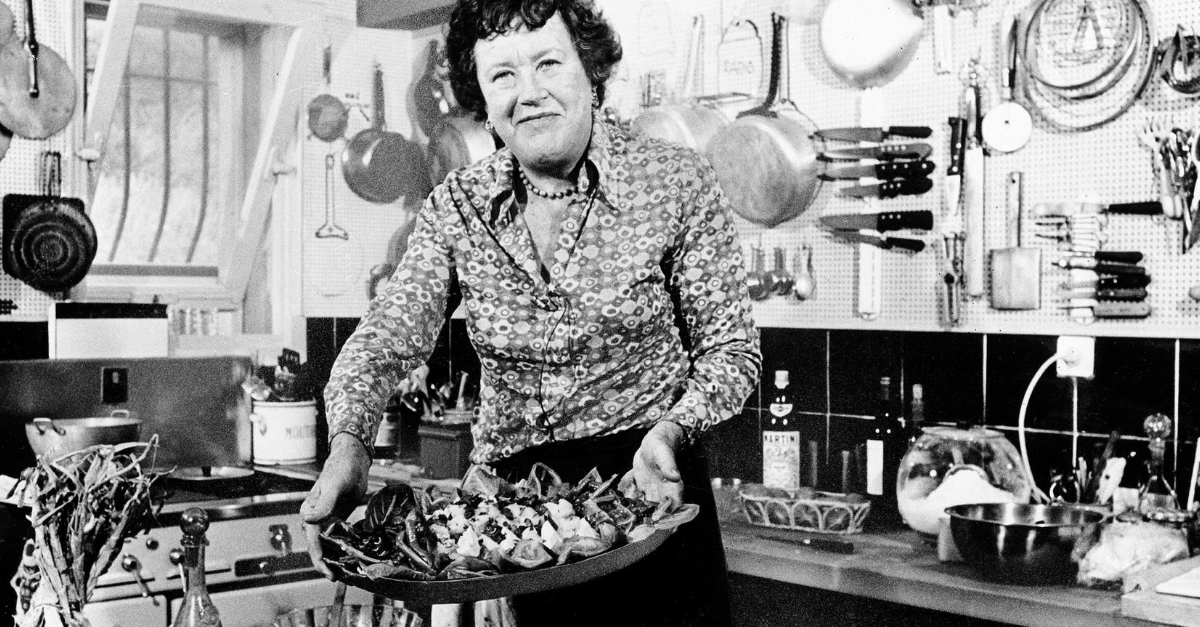 Julia Child’s claim to fame is as a famous chef. She had an eventful life beforehand, though. She started off in the CIA. And her spy career eventually brought her to food.

Early Life and the CIA

Julia Child was born in 1912 in Pasadena, California to extremely successful parents. Her mother, Julia Carolyn Weston, was the heiress to the Weston Paper Company of Massachusets. Julia’s father was John McWilliams, Jr., a banker. Her parents’ social status allowed her to attend preparatory school at Katharine Branson School for Girls. This was followed by attending Smith College, an all-female school where she studied history but also joined the “grass cops” for extracurricular activity. The group’s sole mission was to keep students off the lawn.

She got involved in World War II efforts, as many women did, wanting to help and do what she could for her country. She volunteered at the Pasadena chapter of the American Red Cross, working in the Dept. of Stenographic Services. Child also worked in a civilian service of the U.S. Army called Aircraft Warning Service. Though she was involved in these, she was rejected from the Women?s Army Corps and Women Accepted for Volunteer Emergency Service because she was so tall. Her stenography job landed her in Washington, D.C. at the Office of Strategic Services (OSS). She was one of nearly 5,000 women in the OSS, the operation that led to her involvement in the Central Intelligence Agency. She also later helped develop a shark repellant, testing multiple ingredients until she got it right.

Julia Discovers The Joy of Cooking

Multiple placements in the OSS landed Child in many locales outside of America, including India and Sri Lanka. Sri Lanka is where she met her husband, Paul Child. The pair married and moved to Paris, France. While Paul worked at the U.S. Information Agency, she filled her free time mastering the art of French cooking.

Julia Child took courses at Le Cordon Bleu, shopped at local markets to source ingredients, and whipped up everything she could. Ten years after graduation, Child worked with Louisette Bertholle and Simone Beck on a cookbook, Mastering The Art Of French Cooking. The cookbook was published in 1961 after years of rewriting and perfecting the recipes and the book.

The book’s success was the perfect prelude for Child to spearhead another cooking-related project, The French Chef. Child’s show, The French Chef was a trailblazer. She was beloved as a chef and for her personality. Nearly 200 episodes of the show ran between 1963 and 1966, along with various cookbooks and foundations. Her culinary excellence included having founded Julia Child Foundation for Gastronomy and Culinary Arts and the American Institute of Wine and Food.