Was Marilyn Monroe in ‘The Prince and the Showgirl’ Really Her “Happiest Role?” 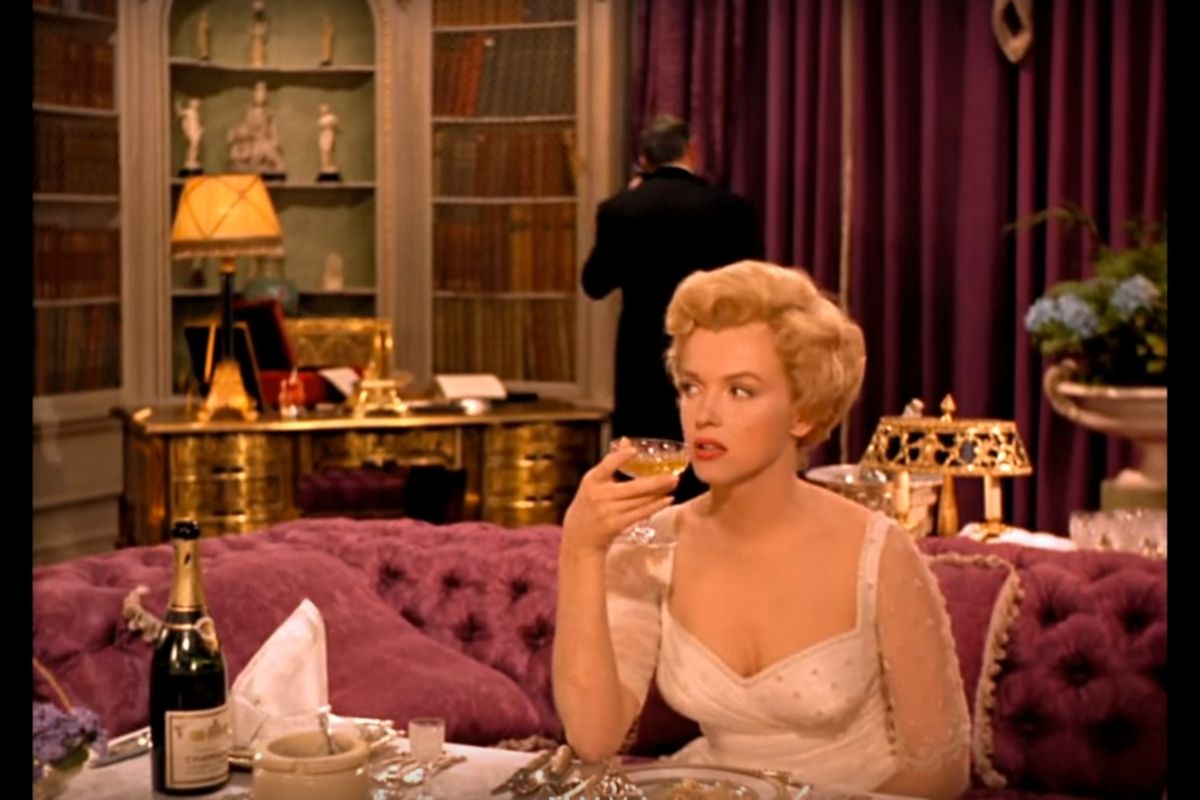 The trailer for The Prince and the Showgirl advertises the film as Marilyn Monroe?s ?happiest role!? So, does it hold up? As a love story between sex pot Monroe and a reserved Laurence Olivier, this 1957 romantic comedy certainly has its awkward moments. Crammed into a one-dimensional role, Monroe did manage to light up her scenes with a sincere charm ? despite loads of on-set controversy that haunted her later career. Yet to call the performance ?happy? would be a gross overstatement; professional tensions between Olivier and Monroe were so high that the actress nearly suffered a mental breakdown.

The Retro Trailer for The Prince and the Showgirl

Born Norma Jeane Mortenson in 1926, Marilyn Monroe?s rise to stardom was no obvious trajectory. Monroe?s mother was mentally unstable and though she tried to raise her daughter alone, Monroe spent the latter half of childhood bouncing between abusive homes. After marrying at 16, Monroe defied her first (and totally forgotten) husband to begin modeling professionally in 1945. With her famously curvaceous figure, Monroe tended toward pin-up modeling. By the time Monroe signed her first acting contract with 20th Century-Fox in 1946, she had already graced the cover of 33 magazines. It was then that she, along with studio exec Ben Lyon, chose her stage name: Marilyn Monroe.

Marilyn Monroe?s real breakthrough came in the early 1950?s. She played small roles in All About Eve and John Huston?s The Asphalt Jungle, the leverage from which earned her a seven-year acting contract. From there, Monroe made an even bigger name for herself through work on several comedies. When she became romantically involved with New York Yankees star Joe DiMaggio, Monroe was really the talk of the town. Even the publication of her nude photographs, taken for a calendar when she was hard up for cash, garnered public sympathy instead of outrage. Fox capitalized on the juicy moment, casting Monroe in three more upcoming films.

Marilyn Monroe Sings and Dances in The Prince and the Showgirl

Her reputation was now set in stone. Starting in 1952, all of Monroe?s new roles portrayed her as some variation of a ditzy blonde. Gone was any girl next door façade; Monroe was now expected to command the screen through wielding her very physical assets. It was during this period that Monroe?s reputation for being a difficult worker really took hold. Lacking the creative freedom that photo shoots had allowed her, Monroe felt boxed in by the forceful studio pressure; she began to suffer from anxiety and insomnia. And started using pills and alcohol to treat it.

Scene-Stealing Marilyn Monroe in The Prince and the Showgirl

The Prince and the Showgirl

By the time Monroe starred in The Prince and the Showgirl, she was more than just an actress. She was an image. Her trademark look (beauty mark, big red lips) had been defined in films like Gentlemen Prefer Blondes and the technicolor noir Niagara, in which Monroe pushed her range to embody the femme fatale. In 1954, The Seven Year Itch catapulted Monroe into cinematic history as the dazzling neighbor who becomes one everyman?s horny obsession. Of course, the movie that surrounded her iconic (?delicious?) white dress moment is much less memorable; Monroe seemed to melt the screen around her. (During this time, Monroe also founded Marilyn Monroe Productions: an innovative, lucrative alternative to the big studio hierarchies.) And so, it was no surprise that when casting for his commercial directorial debut ? a romantic comedy based on Terence Rattigan?s play, The Sleeping Prince ? Laurence Olivier wanted Marilyn Monroe: the beating heart of the 50’s sexual zeitgeist.

The Prince and the Showgirl centers around the affair between Sir Laurence Olivier’s austere, widowed Prince Regent and Elsie, the easygoing American showgirl. As a prince of the fictional Balkan country, Carpathia, the film?s events take place at London’s Carpathian embassy leading up to the coronation of King George V in 1911. As Elsie, Marylin Monroe manages to warm the prince?s hardened heart. Think Pretty Woman, historicized. The conceit was simple enough; Olivier and his wife Vivien Leigh had already portrayed the title characters in the play?s original West End production. But the seasoned Olivier could not have imagined what a nightmare experience the film adaptation would be.

Although Sir Laurence Olivier was first charmed by the American starlet, their relationship crumbled when he had to direct her daily. At the film’s very first press junket, the strap on Marilyn Monroe?s black velvet dress broke, causing a scene. Olivier was not amused. Believing the wardrobe malfunction was a publicity farce, he did not take his co-star seriously from the moment filming began. Monroe, who had always been insecure about her profession, responded negatively to his criticism. Those present on set have agreed that Olivier brought out the worst in Monroe, with the actress becoming so self-conscious that she drank (heavily) to calm her nerves and showed up to rehearsals late. Olivier did not recognize that Monroe?s art came from her, albeit shaky, confidence. So he verbally derided his co-star and in turn she floundered under the pressure and dreaded coming to set. She was continuously tardy.

The Prince and the Showgirl was shot on location in London, England and boasted a cast of veteran British actors, including Dame Sybil Thorndike and Rosamund Greenwood. Monroe had no clue how to present herself seriously beside them. Laurence Olivier, himself a Shakespeare stage legend, struggled to adapt his conservative techniques when directing Monroe. (The constant presence of Monroe?s loyal acting coach, Paula Strasberg did not help as Olivier was fundamentally opposed to Strasberg’s Actors Studio method.) However, cast and crew alike found it hard to sympathize with Monroe who was becoming increasingly dependent on booze, barbiturates, and amphetamines. Despite the success of Marilyn Monroe?s recent films like Bus Stop and The Seven Year Itch, The Prince and the Showgirl was no hit in the United States. While it found an audience in England, dismal American box office numbers seemed to echo the backstage distress of our beloved blonde bombshell.

Marilyn Monroe Sings ?I Want to Be Loved By You? in Some Like it Hot

Marilyn Monroe had just wed the notable playwright Arthur Miller when filming The Prince and the Showgirl. Their union continued as Monroe went on to star in Some Like It Hot, a hilarious high point in her career. Despite appearances, shooting Some Like It Hot was also… a hot mess. Acting with comedic pros like Jack Lemmon and Tony Curtis, Monroe required a notoriously high number of re-takes and reshoots. But it paid off; Some Like It Hot is an enduring, critical success. Sadly, it was also the beginning of the end for the perpetually struggling celebrity.

In 1961, Marilyn Monroe acted in her final movie, John Huston?s cowboy flick The Misfits, which Arthur Miller himself wrote so that his wife might finally perform something meaty and dramatic. But the collaborating couple split up even before The Misfits release date.

On August 5, 1962, Marilyn Monroe was discovered by her housekeeper, dead. She had overdosed on barbiturates, and her corpse was lying in the bed. Many theories followed: that her death was intentional, that she was naked, that she was murdered. In the end, Marilyn Monroe?s premature death was ruled a probable suicide. In the month that followed, suicide rates doubled in Los Angeles. And the loss of this neglected beauty still stings. Listen below, for Elton John?s timeless tribute to Hollywood?s Norma Jeane.