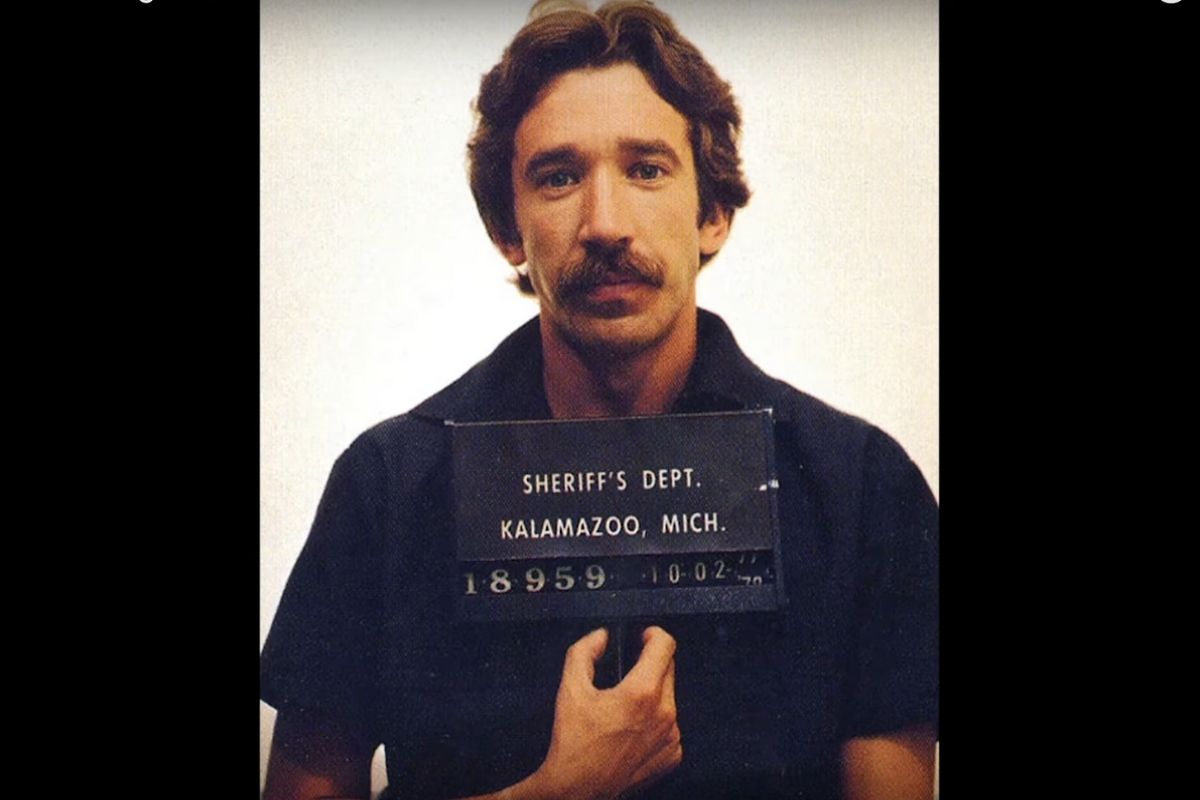 Tim Allen described his own acting range as “strictly limited. I can only play a part if I can draw on personal experience, and that well can go dry pretty quickly” when speaking to Midwest Today 1996. As the publication and year can clue you in, Allen cemented his reputation as a blue-collar everyman throughout the 1990s.

He starred as Tim “The Tool Man” Taylor on the beloved ABC sitcom Home Improvement and continues that to make a lucrative career based on his humble appearance. So it might surprise you to learn that Allen is not your average Carhartt-wearing father figure. Before making it in Hollywood, Allen was arrested in 1978 on charges of trafficking more than a half-kilo of cocaine and faced life imprisonment.

Tim Allen was born in Denver, Colorado, to parents Martha Katherine and Gerald M. Dick. (Allen’s birth surname was Dick.) Dick was a car enthusiast who shared his passion for young, the middle child of six siblings. Tragically, when Allen was just 11 years old, his father died in a car accident after being struck by a drunk driver. His mother soon remarried and relocated the family to Birmingham, Michigan for a fairly traditional suburban upbringing. There, Allen attended Seaholm High School where he enjoyed theater and music classes. He graduated from Western Michigan University in 1976. It was in his home state of Michigan that Allen would be arrested just two years later on serious drug charges.

On October 2, 1978, Tim Allen was arrested in the Kalamazoo/Battle Creek International Airport for possession of over 650 grams (1.43 lb) of cocaine. Allen, an amateur drug dealer himself, set up a drop-off at the airport and left an Adidas bag stuffed with the cocaine in a locker, handing off the key to his customer. Little did Allen know this customer was actually an undercover officer,  who had been tailing Allen for months. Within moments, Allen was being cuffed with a gun in his face.

The Michigan state legislature had recently passed a law tying a life sentence to any conviction involving 650 grams or more of cocaine. Allen, in an effort to avoid this damning sentence, pled guilty to drug trafficking and offered the names of other dealers in exchange for being tried in federal court, rather than state, court. Describing the arrest to Esquire Magazine, Tim Allen said, “I was put in a holding cell with twenty other guys — we had to crap in the same crapper in the middle of the room — and I just told myself, I can’t do this for seven and a half years. I want to kill myself.” Lucky for Allen, he didn’t have to. Circumventing Michigan’s “650 lifer law” (the same law which keeps infamous teen dealer ‘White Boy Rick’ behind bars today) through the federal courts, Allen was paroled in 1981 after serving just two years at the Federal Correctional Institution in Sandstone.

After leaving prison, Tim Allen says he was in a “position of great humility.” Soon after, he began pursuing comedy and, eventually, television. But he did not stay clean and sober forever. In 1997, Allen was arrested for DUI in Birmingham, Michigan. Allen’s blood alcohol content was nearly double the legal limit and he was sentenced to one-year probation and court-ordered rehabilitation.

Tim Allen starred in Home Improvement from 1991 to 1999. Simultaneously, he earned millions leading in Disney’s The Santa Clause franchise and as Buzz Lightyear in Toy Story. If his role as Tim Taylor did not cement Allen’s legacy as a family man, these kid-friendly comedies certainly broadened Allen’s all-American reputation. Today Tim Allen is still in a unique position as a Hollywood millionaire with Rust Belt appeal. He currently stars in the long-running sitcom Last Man Standing, which moved from ABC to Fox in 2018.

In this TV show, Allen plays another Tim Taylor-Esque role: Mike Baxter, the exec of a sporting goods store in Denver, Colorado. At home, Baxter’s masculine energy is in constant contrast with his wife and three daughters. While the premise may seem a little played out, Last Man Standing earns a consistently high rating. Allen, an outspoken supporter of Donald Trump, plays into his conservative leanings through the characterization of Baxter. While this might be a draw for some viewers — especially in a post-Roseanne TV landscape — perhaps it’s the end of an era for Allen’s brand of comedy. Last Man Standing will air its final season in 2021.

Watch: What the ‘Home Improvement’ Cast is Doing Now