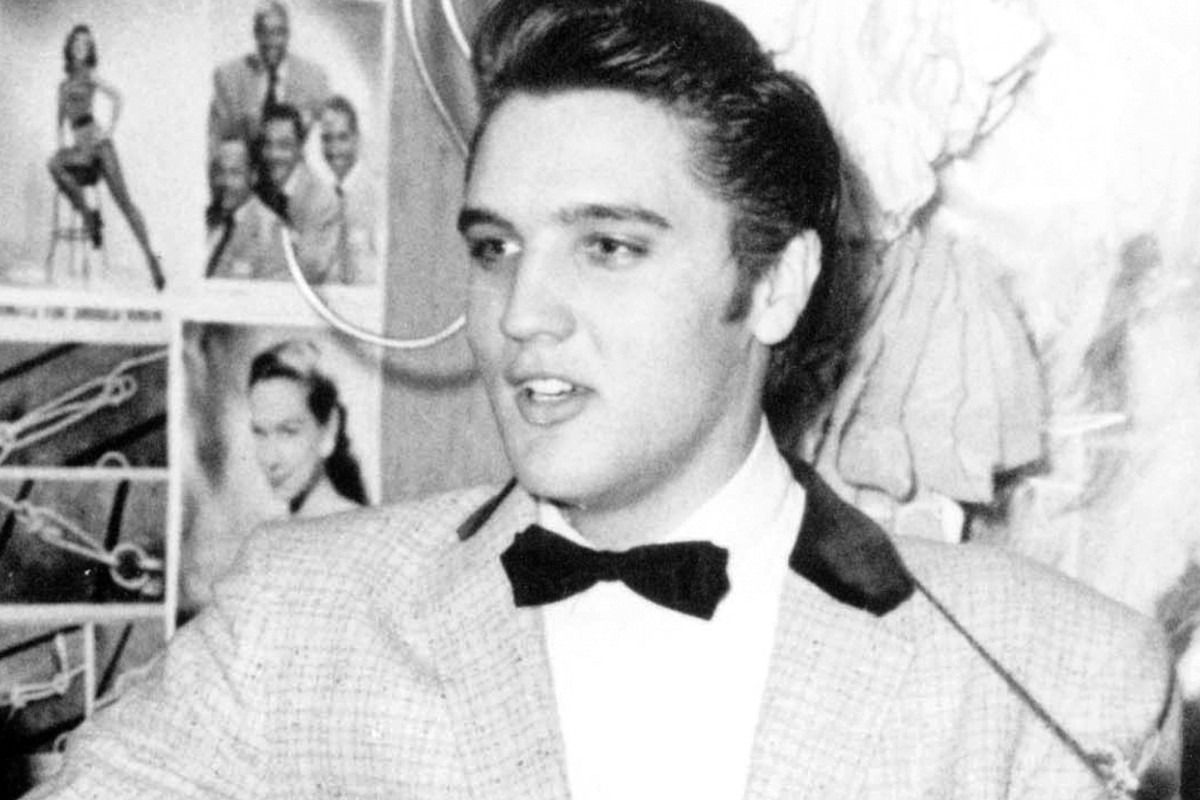 The film is grainy, the sound quality is flimsy, and the song is one we’ve heard before.

Yet the footage of Elvis Presley singing “Hound Dog” on The Milton Berle Show remains electrifying even more than 60 years after it first aired in on April 3, 1956.  Watching  Elvis’ performance, you totally get why the audience goes wild, Debra Paget smooches him, and the episode went down as one of the most important moments in rock and roll history.

So what’s so special about the King of Rock’s second Milton Berle performance? While previous appearances had featured Elvis close up singing slow ballads or playing the acoustic guitar, this was the first time Elvis ditched his guitar and unveiled the glory that is the Elvis Presley full-body gyrating hip dance to a delighted television audience.

Legend has it that the King of Rock ‘n’ Roll’s iconic pelvis dance was born from stage fright. When Elvis played his first paid concert at the Overton Park Shell in Memphis, Tennessee, he masked his nervous, shaky legs with his trademark gyrations.

Earning him the nickname “Elvis the Pelvis”, the gyrating hip movements drove audiences wild and enraged the press. Following the shimmy’s debut on the Berle show, the media slammed the performance as vulgar and animalistic.

“Mr. Presley has no discernible singing ability….For the ear, he is an unutterable bore”, penned music critic Jack Gould in the next day’s New York Times. Meanwhile, the New York Herald Tribune condemned Elvis as “unspeakably untalented and vulgar”.

The New York Daily News wasn’t any kinder. Writer Ben Gross berated the dance as “tinged with the kind of animalism that should be confined to dives and bordellos’. Over at the New York Journal-American, Jack O’Brien wrote that 21-year-old Elvis Presley “makes up for vocal shortcomings with the weirdest and plainly suggestive animation short of an aborigine’s mating dance”.

But our favorite review of Presley’s performance came from Catholic Weekly America, which was simply titled: “Beware of Elvis Presley”.

Elvis Wasn’t Trying to Be Controversial

Even so, television shows would only film Elvis from above the waist for many years to come. Ed Sullivan swore he’d never hire Elvis again (though he’d later eat his words), and Steve Allen, who had already booked Presley for the Tonight Show, allowed the singer to appear only if he agreed to behave. Elvis, ever a good sport, appeared on the show in white formal attire and sang “Hound Dog” to an actual basset hound.