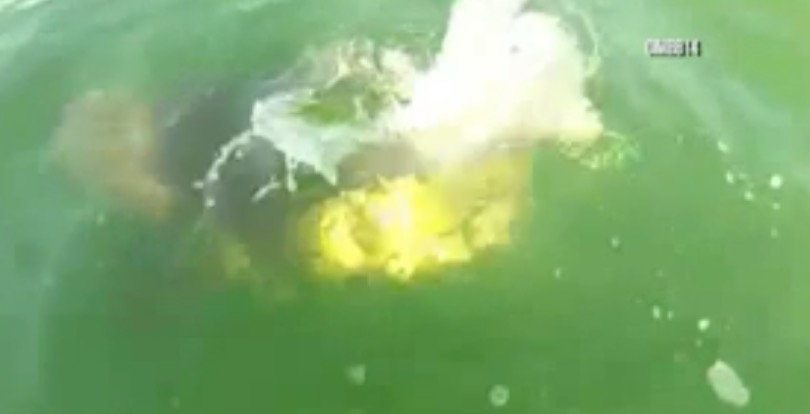 Fishermen in Bonita Springs, Florida hooked what appeared to be a tiger shark and were busy reeling it in when the unexpected happened.

A brownish, giant grouper can be seen in the video slowly approaching the four-foot-long, panicking shark and engulfing it in one bite. The giant grouper snatched up the black tip shark in just one bite and dragged it into the deep ocean.

This particular grouper was a goliath grouper, a solitary fish that will defend its territory when threatened. It has a large, thick, elongated body that can grow to over eight feet long and can weigh up to 800 pounds.  This fish is usually a mottled yellow-brown to grey which allows it to blend into their rocky coral and muddy inshore habitat. The fish has sharp teeth that are adapted for seizing prey and preventing escape although most prey is simply engulfed and swallowed whole.

The goliath grouper is endangered and is recognized as a critically endangered species by the World Conservation Union. They are found mostly in the Atlantic Ocean, the Gulf of Mexico and the Caribbean Sea.

Large adults of this species likely have very few natural predators. When they do fall prey it is usually to large fish such as barracuda, king mackerel and moray eels, as well as other groupers. A great hammerhead shark could also take one down, but this little tiger shark probably didn’t have a chance.

Very large goliath grouper have been observed to stalk divers, so be careful out there.  There are a lot of scary fish in that sea!