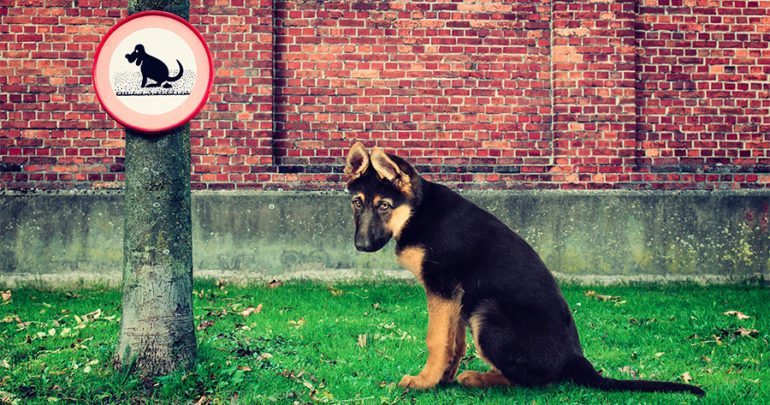 Your dog will be on the lam after hearing about these strange dog laws.

Your dog may earn a timeout when he steals food off the table or chews up your favorite shoes, but those big puppy dog eyes ensure he’s never in trouble for long. But not all dogs have it so easy.

Does your pup like to pick a fight with your cat? You better not live in North Carolina. Does your dog like to get together with three or more of his canine pals in Oklahoma? He better have a signed permit for that.

These 10 state laws do their best to keep our furry friends in line, but they’re so strangely specific, we can’t help but laugh.

Once the clock strikes 6 p.m. in Little Rock, Arkansas, it becomes illegal for dogs to bark. Excessive barking is annoying, but barking is a dog’s way of communicating.

How would you feel if you weren’t allowed to speak once the sun went down?

2. Too Cool for School in Connecticut Doggies that dream of one day going off to college are sadly out of luck in Connecticut. According to state law, it’s illegal to educate canines.

If you’re ever out taking a walk with Fido in New Castle, Delaware, remember to keep your hands to yourself.

Showing affection in a public place to another person is strictly prohibited, and that includes holding hands. You don’t want your dog feeling like a third wheel, do you?

4. A Smelly Situation in Illinois If there was ever a need for doggy deodorant, now is the time for Galesburg, Illinois dog owners to stock up.

Lawmakers have made it illegal to own a smelly dog. But on the bright side, doggy shampoo

sales must be way up.

Dogs better think twice before chasing a squirrel in the public park next to the Madison, Wisconsin capitol building. Those special squirrels are protected by their neighbors in government.

There’s a local law declaring it to be illegal for dogs to “worry” the bushy-tailed rodents. Improving inter-species relations one squirrel at a time. This local ordinance in International Falls, Minnesota may actually have a dog’s best interest in mind. It prohibits cats from chasing dogs up telephone poles, but it may also be a blow to a dog’s ego.

A cat chasing a dog? Up a pole? Someone is confused here.

7. The Ugly Face Ordinance in Oklahoma

Anyone caught making “ugly faces” at a dog in Oklahoma is subject to fines or even jail time. The dogs surely appreciate it, but enforcing this rule can’t be easy.

Isn’t beauty in the eye of the beholder? Heading out to the opera tonight? Your French Poodle will have to stay home. Chicago lawmakers have banned the breed from attending the opera, and they seem to be serious about it.

But the law doesn’t say anything about your Chihuahua, Pug, or any other dog breed. Why are they so against Poodles at the opera?

Wanessa, New Jersey has a law stating dogs are not allowed to cry. We’re not sure if whining and whimpering fall under that category, but to be safe, your dog better be happy all the time.

Buck up pup, there’s no crying in politics. Alcohol can be extremely harmful to dogs, and even in small amounts, it can be fatal. According to a local ordinance in Chicago, it’s illegal to give a dog whiskey, but it doesn’t say anything about other kinds of alcohol.

An amendment may be in order.

These strange dog laws may mean well, but we’re not sure what they’re trying to accomplish. No written animal law is going to keep a dog from barking after 6 p.m., and worrying squirrels is what dogs do best.

But if you want to keep your pooch on the straight and narrow, check out the local laws in your area.

WATCH NOW: Dogs Can Be Naughty But We Love Them Anyway