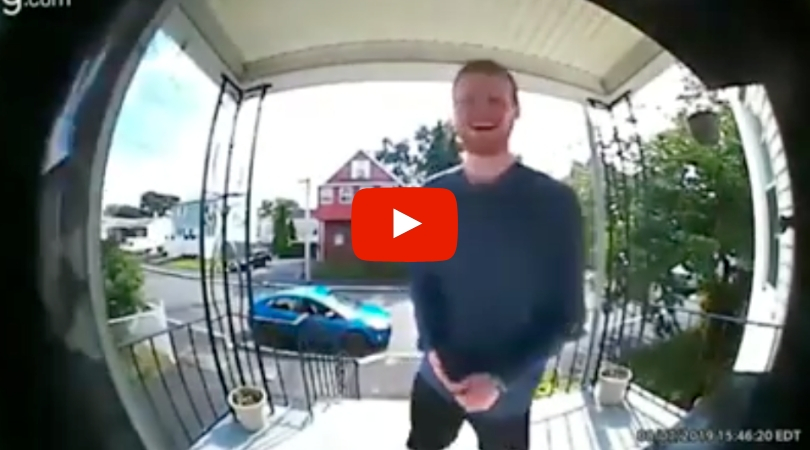 Ah, the power of technology. It truly amazes me how far we have gotten with it. From talking cameras that feed your dog treats, to doorbell cameras that record everything and can project your voice out of them. It’s creepy, sure, but at the same time, it’s really really convenient. Like it was for a father in Massachusetts, where he was able to hilariously meet a poor kid trying to take his daughter on a date.

The best part about this whole situation is that the father wasn’t even there in person! The father literally used his video doorbell to “meet” his daughter’s date for the first time. Safe to say this man didn’t even see it coming once he knocked on the door. The father was at work at the time, but still, he was able to give in his two cents through the intercom before his daughter could get to the door and save him.

Luckily for us, it was uploaded on social media to Instagram by the girl’s brother, because well, it’s hilarious. The trending doorbell video begins with the father, Pedro Lugo, asking who the man standing on his doorstep was. As the man introduces himself, the father begins to laugh telling her daughter’s date, “I get to see your face, but you don’t get to see mine.” Which is such a dad comment if you ask me. He continues to play 21 questions with the terrified man, then asking what time he’ll be home. The man, who is called Jared, replies, “Probably before 11.”

Not having it one bit, the father quickly responds, “Oh, I heard 10:30. Ok, that’s good.” His daughter Grace finally arrives popping her head around the camera and you can quickly see the shame and frustration in her eyes. While she doesn’t seem all that surprised about the situation in itself, she does give her dad a hard time by trying to convince him that they’ll be home by 11. To which she fails because the dad is dead stuck at 10:30. He then tells Jared to treat her with respect since she is his first daughter.

As the video ends, you can see the couple walking away to the car, but the father isn’t quite done with them yet. He calls out for his son, who then tells him to take a picture of Jared’s license plate. And although this might be a bit too excessive for his daughter’s first date, the brother did note that the father was a “big prankster” and was just trying to liven the situation a bit. Which it worked, props to you, Mr. Pedro. But, I guess this just goes to show you that nowadays, you never know who’s watching.

Editor’s note: This article was originally published on August 15, 2019.