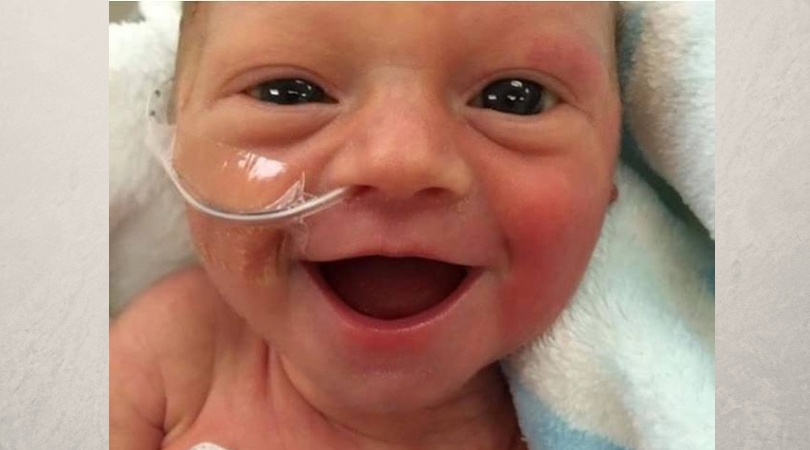 It’s no secret that premature birth is terrifying for any parent, especially if it’s their first-born. Many parents may feel helpless at times, as their little ones battle every day to stay alive. Which is why sometimes they cling onto hope to get them out of that anxious pool and think about their child’s future. Like in this case, where a heartfelt smile managed to give hope to a couple that needed a little reminder that miracles exist.

Back in 2016, Lauren Vinje and her husband David gave birth to Freya Vinje who was born prematurely weighing 3 pounds and 14 ounces. Turns out Freya gave the new parents something miraculous to keep their spirits high and mighty. Just five days days old, Freya proved to everyone at the hospital that she was indeed happy she was on Earth, by showing off the brightest smile I have ever seen on a baby. It was a life-affirming, huge smile that has been making its way around the internet ever since, giving hope to parents of premature babies all around the world.

Lauren shared their story on Birth Without Fear’s Facebook page, saying she began to see signs of preeclampsia at 28 weeks, causing her and her husband to fear for their daughter’s life. The mother knew something was wrong after she would get swollen to the point that she couldn’t fit her hands together around her ankles, and began to see flashing lights. Under the advice of doctors, Lauren made it through to 32 weeks.

A few weeks later, Lauren was induced and quickly learned that Freya had turned sideways, which meant she needed to undergo an emergency c-section. Working with the hospital staff, Lauren did everything she could to keep her daughter alive, and sure enough, Freya emerged proving to be a fighter.

God has something very special planned for this little girl! Her smile is the way she tells the world, "Watch what I do next!"

Five days later, Lauren said her heart began to burst with even more love after little Freya smiled from her bed in the NICU. The parents were able to catch it on camera and decided to share it online to spark joy to those in their situation. Their photo quickly went viral, as other parents came forward and shared their personal stories of stress, heartache, and joy after giving birth to premature babies themselves. Safe to say Freya is a preemie miracle that has spread renewed hope to parents around the world, reminding them to stay positive.

Today, baby Freya is a few months shy from turning 3-year-old and is a proud big sister to a newborn baby, Elowen. Lauren joked that she hasn’t stopped smiling since, and is “one of those kids” that waves at everyone walking around the grocery store. This happy little girl with a big smile probably initiates more smiles on people’s faces. You know what they say, a dazzling smile can sure go a long way.

Editor’s note: This article was originally published on June 12, 2019.