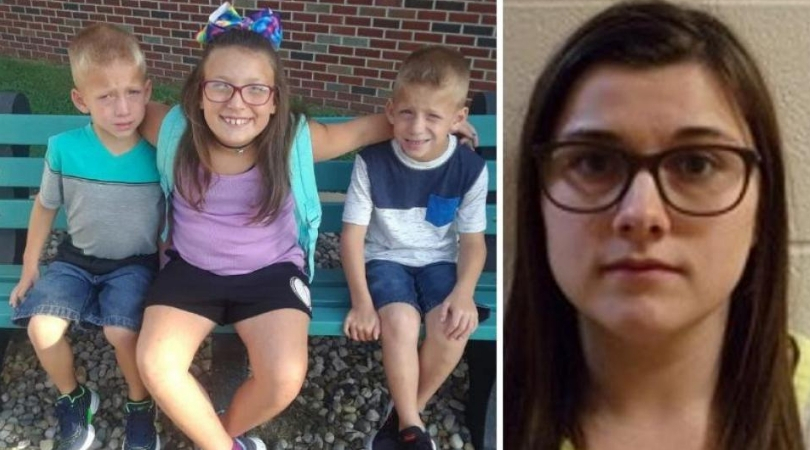 Editor Note: This post was originally published on October 30, 2018. It was updated on December 18, 2019, after authorities announced Alyssa Shepherd’s sentence.

A woman responsible for a 2018 crash that unfortunately killed three siblings while they were getting on their school bus was sentenced to four years in prison. According to authorities, Alyssa Shepard received a sentence of four years in the Department of Corrections, three years of home monitoring, three years probation, and a ten-year license suspension.

According to WSBT, Britanny Ingle, the mother of the three children killed, physically lunged at Shepard in the courtroom and was later charged with misdemeanor battery. A sentencing hearing for Shepherd took place On December 18, 2019, where she initially faced up to 21.5 years in prison. Her family asked for a lesser sentence.

BREAKING: Brittany Ingle, the mother of the three kids who were killed in the Fulton County bus stop crash, was taken from the courthouse in handcuffs today after trying to charge at Alyssa Shepherd during sentencing.

On October 30, 2018, Shepherd was driving her truck and passed the school bus, which had stopped for the children to board and had its stop arm extended. Shepherd hit and killed 9-year-old Alivia Stahl and twin 6-year brothers Xzavier and Mazon Ingle. Maverick Lowe, a fourth child, was seriously injured but survived.

In October, a jury convicted her of criminal recklessness, reckless homicide, and passing a school bus causing injury. After the incident, the family of the three siblings pushed hard for a bill which would increase penalties for drivers who disregard flashing red lights and stop arms on school buses. It officially became state law on July 1, 2019.

The new law stated people can now face up to a year in jail and up to a $5,000 fine for passing a school bus with a stop arm out. Shepherd will be sentenced under previous laws.

Authorities have released the name of the driver, Alyssa Shepherd, 24, of Rochester. Shepherd was arrested and charged Tuesday with three counts of reckless homicide and a misdemeanor count of passing a school bus when a signal arm is extended. Indiana law requires motorists to stop when a school bus is picking up or dropping off children. The students had the right of way as they crossed the street. She works as Children’s Director at Faith Outreach, a Foursquare Gospel Church in Rochester.

11-year-old Maverik Lowe was airlifted to Parkview Hospital in Fort Wayne with life-threatening injuries. There has been no word of his status as of yet, but he was not related to the children who were killed in the accident. The family has created a GoFundMe page, stating after being thrown over 30 ft, the boy suffered broken ribs, busted kneecap, fractures in his arm and wrist and his leg is in pins and rods. Lowe also had plastic surgery to “put his face back together” and has slipped disks in his spine and his neck. If you would like to donate you can click here.

Three children were hit and killed by a vehicle while boarding a school bus early Tuesday morning in Fulton County. According to authorities, the incident occurred at 7:30 a.m. on 4600 N. State Road 25 near Rochester, 100 miles north of Indianapolis

According to reports, four children were crossing a two-lane road from a mobile home park to get to their school bus when they were struck by a Toyota Tacoma truck. A preliminary investigation showed the bus was in the northbound lane of State Road 25 with its emergency lights flashing and its stop-sign arm out when the children were struck by the southbound truck. The three children who died have been identified as two twin 6-year-old boys, Xzavier and Mason Ingle, and their 9-year-old sister, Alivia Stahl. Visible images of the accident show the truck with heavy front-end damage at the scene.

At the time of the incident, there were no children on the school bus, but one other injury was also reported and the child was airlifted to Fort Wayne Hospital. The condition of the 11-year-old boy is still unknown but authorities stated he did suffer many broken bones. Indiana State Police are currently investigating the case, but want to remind drivers that we all have a responsibility to share the road, in a safe manner.

“I haven’t seen first responders and troopers cry in a long time. When the children’s father had to make identification of his children, that was just gut-wrenching. We saw tears today and our hearts just go out to them because most of us have children and we can’t imagine the pain that he felt today. It was heartbreaking It’s still heartbreaking.”

@IndStatePolice is working a fatal crash involving students getting on a Tippacanoe Valley School Cororation bus. There are three fatalities and one who has been airlifted to a Ft Wayne hospital. The Parents of the children involved have been notified.

All children attend Mentone Elementary School. The school spoke on the incident, saying they have deployed all school counselors to meet the emotional needs of students, staff, and parents. They are currently waiting to learn more confined details of the students. One witness said her grandchild was supposed to be the bus stop as well but changed plans last minute to keep them from being at the scene.

Police are interviewing the 24-year-old woman who was driving the pickup and is fully cooperating with the police. No charges have been filed against her.