A look at some of the rhetoric Thursday from Trump and his supporting speakers at Republican National Convention proceedings:

TRUMP: “Instead of following the science, Joe Biden wants to inflict a painful shutdown on the entire country. His shutdown would inflict unthinkable and lasting harm on our nation’s children, families, and citizens of all backgrounds.”

THE FACTS: That’s false. Biden has publicly said he would shut down the nation’s economy only if scientists and public health advisers recommended he do so to stem the COVID-19 threat. In other words, he said he would follow the science, not disregard it.

Speaking Sunday in an ABC interview, Biden said he “will be prepared to do whatever it takes to save lives” when he was asked if he would be willing to shut the country again.

“So if the scientists say shut it down?” asked ABC’s David Muir.

“I would shut it down,” Biden responded. “I would listen to the scientists.” The former vice president has said repeatedly that no one knows what January would look like.

TRUMP: “For those of you that still drive a car, look how low your gasoline bill is. You haven’t seen that in a long time.”

THE FACTS: Trump seems to be taking credit for lower prices that were the byproduct of a pandemic that has killed more than 180,000 Americans.

Gasoline prices didn’t fall because of the Trump administration. They plunged because of the coronavirus forcing people to abandon their offices, schools, business trips and vacations.

As more people worked from home, they needed to fill up their cars less frequently. Airlines didn’t need to burn through as much fuel. Here’s the statement from the U.S. Energy Information Administration: “Reduced economic activity related to the COVID-19 pandemic has caused changes in energy demand and supply patterns in 2020.” World demand for oil has fallen by 8 million barrels a day, according to that agency’s estimates.
___

TRUMP: “The United States has among the lowest case fatality rates of any major country anywhere in the world.”

THE FACTS: Not true. Not if you consider Russia, Saudi Arabia, the Philippines and India to be major countries.

The U.S. sits right in the middle when it comes to COVID-19 mortality rates in the 20 nations most impacted by the pandemic, according to data from the Johns Hopkins University Coronavirus Resource Center.

Of the 20, Mexico has the highest mortality rate at 10.8 deaths for every 100 confirmed COVID cases, followed by Ecuador at 5.8. Saudi Arabia had the lowest rate of the 20 nations at 1.2, followed by Bangladesh, the Philippines, Russia, Morocco, India, Argentina, South Africa and Chile.

When the center looked at the data in another way, analyzing the COVID death rate for every 100,000 residents, the U.S. fares even worse. Only three nations — Brazil, Chile and Peru — posted higher death rates.

Understanding deaths as a percentage of the population or as a percentage of known infections is problematic because countries track and report COVID-19 deaths and cases differently. Many other factors are in play in shaping a death toll besides how well a country responded to the pandemic, such as the overall health or youth of national populations.

THE FACTS: That’s a hollow claim.

There’s no evidence that Black Lives Matter or antifa, or any political group for that matter, is infiltrating racial injustice protests with violence.

In June, The Associated Press analyzed court records, employment histories and social media posts for 217 people arrested in Minneapolis and the District of Columbia, cities at the center of the protests earlier this year.

More than 85 percent of the people arrested were local residents, and few had an affiliation with any organized groups. Social media posts for a few of those arrested indicated they were involved in left-leaning activities while others expressed support for the political right and Trump himself.

Local police departments across the country were forced to knock down widespread social media rumors that busloads of “antifa,” a term for leftist militants, were coming to violently disrupt cities and towns during nationwide racial justice protests. In June, Twitter and Facebook busted accounts linked to white supremacy groups that were promoting some of those falsehoods online.

Such firms are only a slice of the charter school market, meaning Biden’s position wouldn’t substantially alter the charter landscape that is dominated by non-profit organizations.

TRUMP: “We have spent $2.5 trillion on completely rebuilding our military, which was very badly depleted when I took office, as you know.”

THE FACTS: That’s an exaggeration.

His administration has accelerated a sharp buildup in defense spending and paused spending limits but a number of new Pentagon weapons programs, such as the F-35 fighter jet, predate Trump.

The Air Force’s Minuteman 3 missiles, a key part of the U.S. nuclear force, for instance, have been operating since the early 1970s and the modernization was begun under the Obama administration.
___

TRUMP: “We also passed VA accountability and VA Choice, our great veterans. We are taking care of our veterans.”

THE FACTS: False. He didn’t get Veterans Choice approved; President Barack Obama did in 2014. Trump expanded it, under a 2018 law known as the MISSION Act. It allows veterans to get health care outside the VA system at public expense under certain conditions.

TRUMP, claiming to have “secured for the first time American energy independence.”

THE FACTS: This is misleading. The pandemic has severely lessened the demand for crude oil. But through June, the United States was still importing more crude oil than it was selling overseas, according to the Census Bureau.

While the United States has become less reliant on foreign oil, it only produces 11.3 million barrels a day and consumes 18.5 million barrels of liquid fuels daily, according to the U.S. Energy Information Administration.

Technological advances like fracking and horizontal drilling have allowed the U.S. to greatly increase production, but the country still imports millions of barrels of oil from Saudi Arabia, Canada, Iraq and other countries. One reason is that foreign oil is more affordable. Another is that much of what the U.S. produces is hard for domestic refiners to convert to practical use. So the U.S. exports that production and imports oil that is more suitable for American refineries to handle.

IVANKA TRUMP: “Our president rapidly mobilized the full force of government and the private sector to produce ventilators within weeks — to build the most robust testing system in the world.”

THE FACTS: Her assertion of superior U.S. testing for COVID-19 is dubious. The U.S. repeatedly stumbled with testing in the early weeks of the outbreak, allowing the virus to quickly spread in the U.S. His own experts say the U.S. is nowhere near the level of testing needed to control the virus.

Dr. Robert Redfield, director of the Centers for Disease Control and Prevention, recently testified that health officials are still working to significantly increase testing capacity, calling such expansion a “critical underpinning of our response.”

The U.S. currently is conducting nearly 750,000 tests a day, far short of what many public health experts say the U.S. should be testing to control the spread of the virus. Looking to the fall, some experts have called for 4 million or more tests daily, while a group assembled by Harvard University estimated that 20 million a day would be needed to keep the virus in check.

Redfield has said the U.S. was aiming to boost testing to 3 million daily by “pooling” multiple people’s samples, a technique that is still under review by the FDA. He stressed the need for expanded surveillance because some people who get infected may not show symptoms.

“We still have a ways to go,” Redfield said.

Frequent shortages also spurred the CDC to quietly issue new guidance on testing. While in the early months of the outbreak Trump repeatedly insisted that “anybody” who wants a test can get a test, Redfield issued a statement this week that “‘Everyone who wants a test does not necessarily need a test.”

The U.S. stumbled early in the pandemic response as the CDC struggled to develop its own test for the coronavirus in January, later discovering problems in its kits sent to state and county public health labs in early February.

It took the CDC more than two weeks to come up with a fix to the test kits, leading to delays in diagnoses through February, a critical month when the virus took root in the U.S.

THE FACTS: This is a distorted tale Trump and Republicans loves to tell. Yes, the U.S. flew cash to Iran in the Obama years, but it was money the United States owed to that country.

Cotton also played into the convention’s pattern of attributing every questionable action of President Barack Obama’s administration to Biden personally.

Watch: Biden Rejects the Suggestion to Not Debate Trump 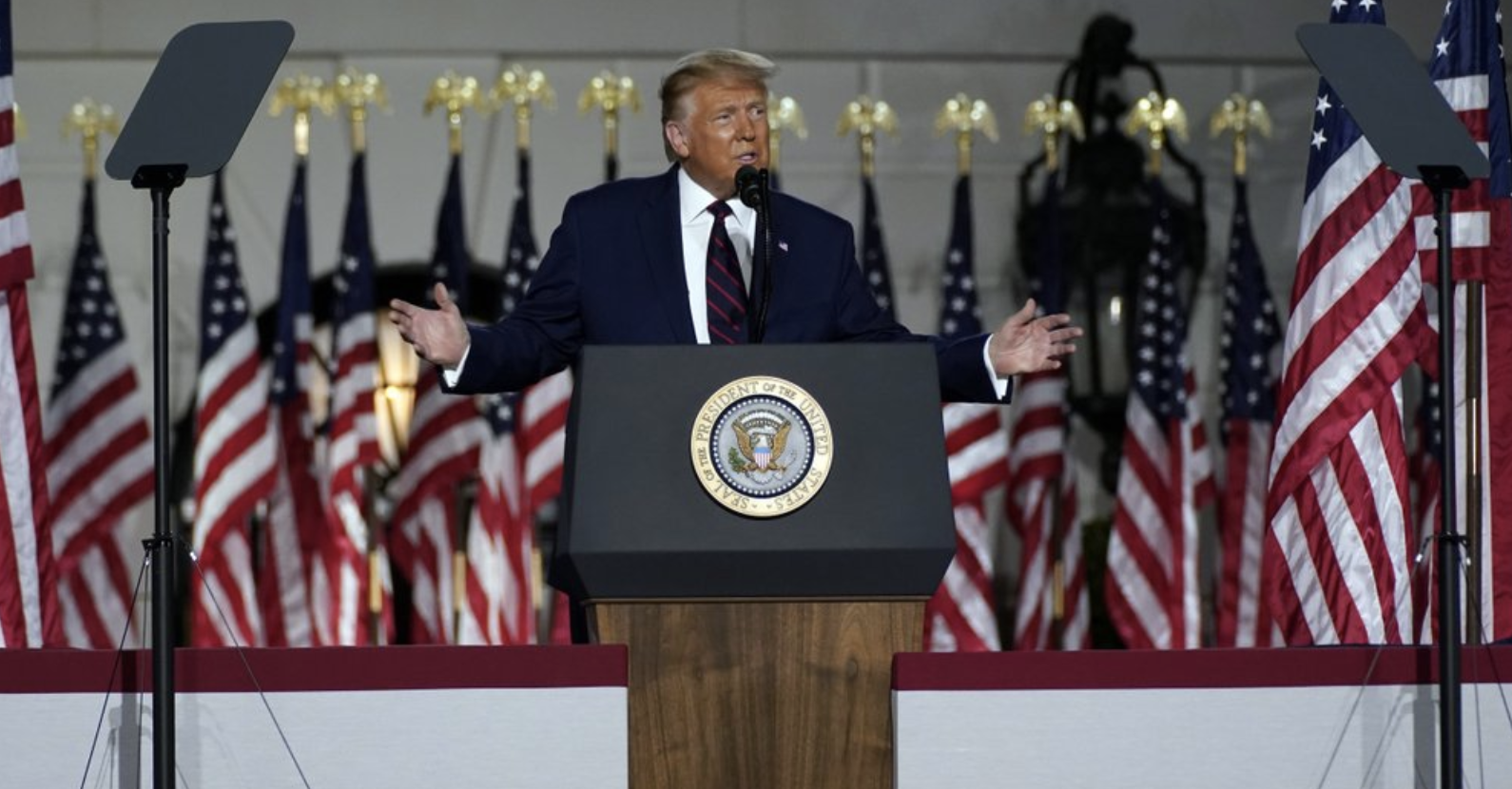