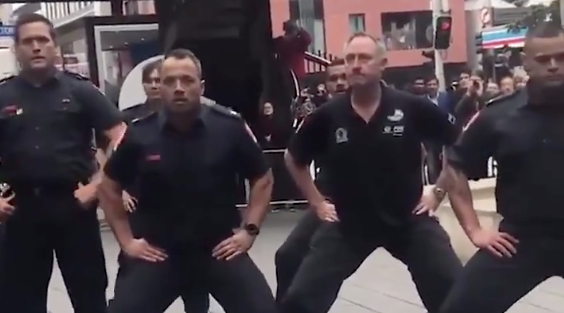 We always did like those Kiwis. Good blokes. Firefighters in New Zealand paid tribute to their brothers and sisters in New York who were lost saving lives during the September 11th terrorist attacks on the World Trade Center in New York by performing a traditional haka dance and then climbed the stairs of the 1,076-foot-high Sky Tower in Auckland, New Zealand.

Though the haka dance is primarily known as a customary war dance of New Zealand’s native M?ori people, performed by warriors as a sort of battle preparation or “pump up” for battle, the dance actually has a number of variations and meanings. Haka dances are performed to welcome distinguished guests, to acknowledge great achievements or occasions, and to honor the deceased at funerals. (Many New Zealand sports teams also perform some version of a haka dance before matches.)

New Zealand firefighters performed a haka, a type of ancient war dance, to pay tribute to the first responders who died in the line of duty on September 11. They then climbed the stairs of the Sky Tower in memory of their American counterparts. https://t.co/xfbXRvI2xi pic.twitter.com/3E3vV1Hsgi

243 firefighters took part in the memorial climb. New York Fire Department chiefs John Buckheit, Howard Hill and David Morkal attended the event. The climb also honored the 59 Kiwi firefighters to have died in service of their countrymen since records began in 1872, as well as the 343 FDNY firefighters who perished on 9/11.

As far as tributes to the brave firefighters we lost on 9/11 goes, this has to be one of the best, even if it’s just in the “Foreign 9/11 Tributes” category. Haka dances are pretty rad. And stirring. They honor the brave and, frankly, there aren’t too many people who’ve lived in the entire history of the world braver than the firefighters who ran into two literal towering infernos — two sights so terrifying that human beings should have no natural ability to comprehend them let alone run toward and inside of them. But they did. It’s safe to say they’ve earned their haka dance, as did the brave New Zealand firefighters who’ve lost their lives over the years.

This story was originally published September 11, 2019.

Watch: The 9/11 Firefighter Whose Name You Need to Know