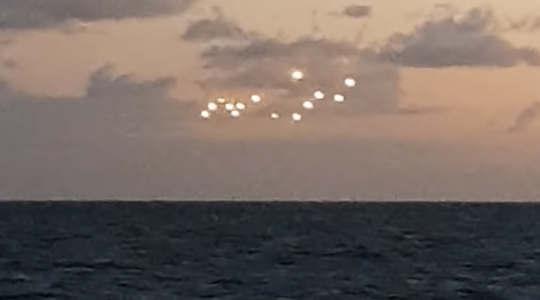 Some crystal clear footage that has no clear explanation has made its way out of North Carolina and the only logical conclusion that can be drawn from it, if we’re being objective and level-headed here, is: JESUS TAP DANCING CHRIST THAT IS AN ALIEN SHIP WITH ITS CLOAKING DEVICE ENGAGED WE ARE NOT ALONE AND MUST PREPARE FOR AN INTERGALACTIC WAR. Why would a space ship from an impossibly advanced civilization still show its lights when it’s in stealth mode? There’s no time for questions like that we’re trying to create a hysteria here.

Well, let’s not get ahead of ourselves quite yet. It would be prudent to provide a few details before you run off to stock up on canned beans and whatever rounds you think will be able to penetrate Klendorian body armor.

Posted to the YouTube account of William Guy, the video was taken from a ferry off the coast of North Carolina. According to Guy, they were smack in the middle of the ocean with nothing around them when the 14 lights first appeared. Then they just floated there.

William, nice vid. As your vid on the news reads you were on a ferry off the coast of North Carolina and facing towards Pamlico Sound I am pretty sure I know what those lights are. As a former Marine based at the 2nd Marine Air Wing in Cherry Point, N.C. And flight crew Sgt. on the C-130 squadron VMGR-252. We use to regularly drop flares out of the back of our plane in the evenings for military exercises in that area. They are one million candle power each so they were pretty bright and can be seen from far away and floated down slow as they hung from a parachute. When we would fly back to base in Havelock N.C. We would watch the news and people called in to say they sited UFO?s in the area. Locals in that area all know that goes on. I?m pretty sure the ferry captain knew too. When I did this it was from 1976-1980. Glad to see the Marines are still spooking people. Have fun and keep looking.

Coincidentally, there does happen to be a military base in the area. The Marine Air Corps Station in Cherry Point, N.C. is 125 miles away from where the lights were seen. Funny thing, though. When asked for comment, a spokesperson for the base claimed that none of their aircraft were in the area that day.

My buddy Zack was always on the ground, so he doesn?t know what these are either.

Aliens are real. Do with that what you will.