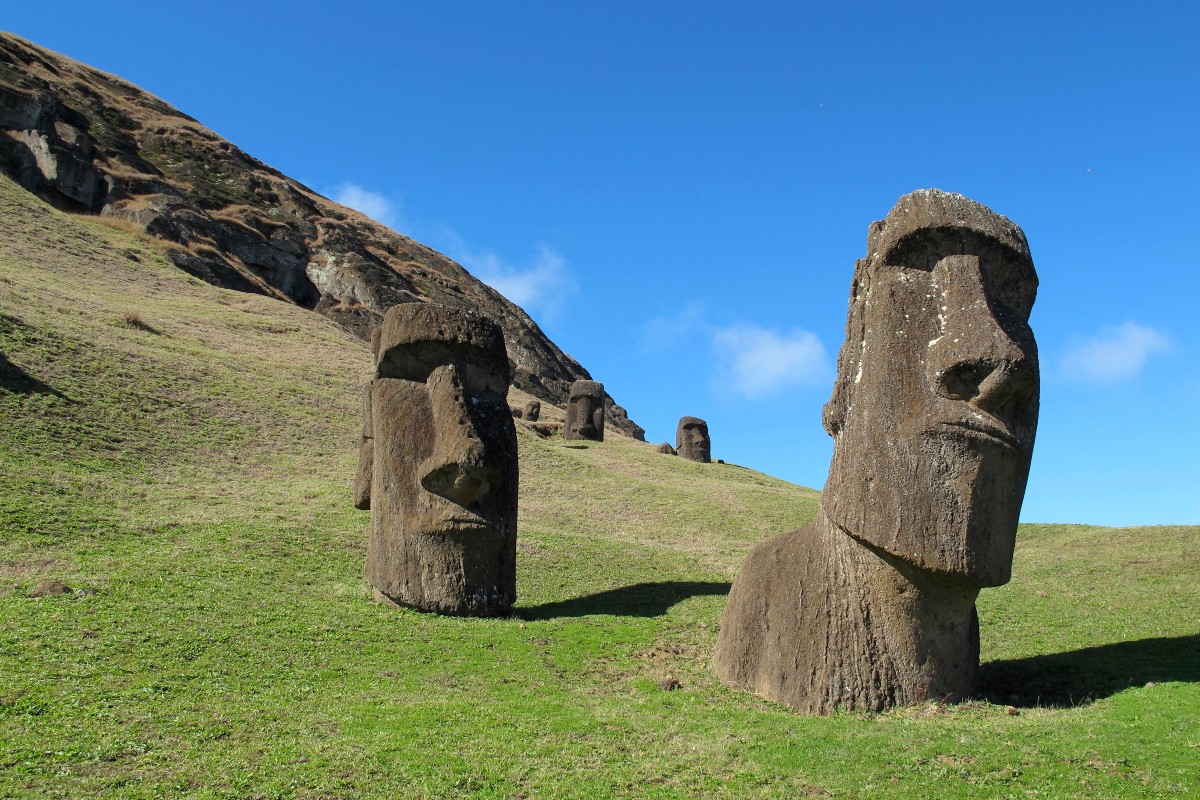 The Easter Island statues, or moai,  and their stone platform bases, ahu, have stood as a symbol of lost civilizations ever since the first European explorers landed on the island in 1722. The thousands of stone statues are the remains of the Rapa Nui civilization, who chose a remote island 2,300 miles off the coast of South America in the Pacific Ocean as their home before they vanished almost completely from the earth.

Easter Island: From Beginning to Collapse

The first Rapa Nui people came from Polynesia and landed on the island spanning 63 square miles sometime between 800 AD and 1200 AD.  They called the island “E pito o te kainga a Hau Maka” “the navel of the world” and “Mata ki te rangi” or “eyes looking to the sky.” At their peak, some theorize the island’s population may have been as high as 15,000.

But by first European contact in the 18th century, Dutch explorer Jacob Roggeveen estimated less than 3,000 inhabited the South Pacific island. Not a single statue stood upright when Captain James Cook arrived in 1774, and by the end of the 19th century, only 111 inhabitants remained. In 1888  Chile annexed the island, and the last Rapa Nui became Chilean citizens in 1966.

What became of the Rapa Nui?

The mystery of Easter Island’s inhabitants’ fate has produced conflicting theories. Jared Diamond’s 2005 book Collapse frames the Easter Islanders’ societal collapse as an environmentalist parable. Diamond describes the Polynesian Rapa Nui culture as “the clearest example of a society that destroyed itself by overexploiting its own resources.”

The island, initially covered in trees, was all but barren by the time Europeans arrived. Deforestation of native palm trees for agriculture, as well as transporting the Rapa Nui’s moai statues led to ecocide, “starvation, population crash, and cannibalism” according to this narrative.

But new research in radiocarbon dating and other archeological studies has since challenged Diamond’s narrative. For starters, anthropologists suggest accounts of Rapa Nui society’s cannibalism represents the unfounded bias of European visitors. And a new study focusing on the Anakena site of the island challenges the claim that the islanders were the primary instrument of their own destruction.

Carl Lipo and Terry Hunt suggest that the island’s population peaked around 3,000, not 15,000. Obsidian shards discovered at the dig site suggest humans arrived later than previously thought. Moreover, they argue Polynesian rat, an invasive species that accompanied early settlers, feasted on palm seeds, eventually destroying the forests and their ecosystem. In their narrative, colonialism from Europe and Peru provides the final blow to the weakened Easter Island civilization.

Many researchers remain unconvinced that the Rapa Nui consumptive habits didn’t play a significant role in their downfall, however. Whether the agents of environmental collapse or the victims of it, the Rapa Nui nonetheless provided a powerful example of what becomes of civilizations when their ecosystems fail.

Watch: Ancient Greek Temples Had Ramps For People With Disabilities 2,500 Years Ago