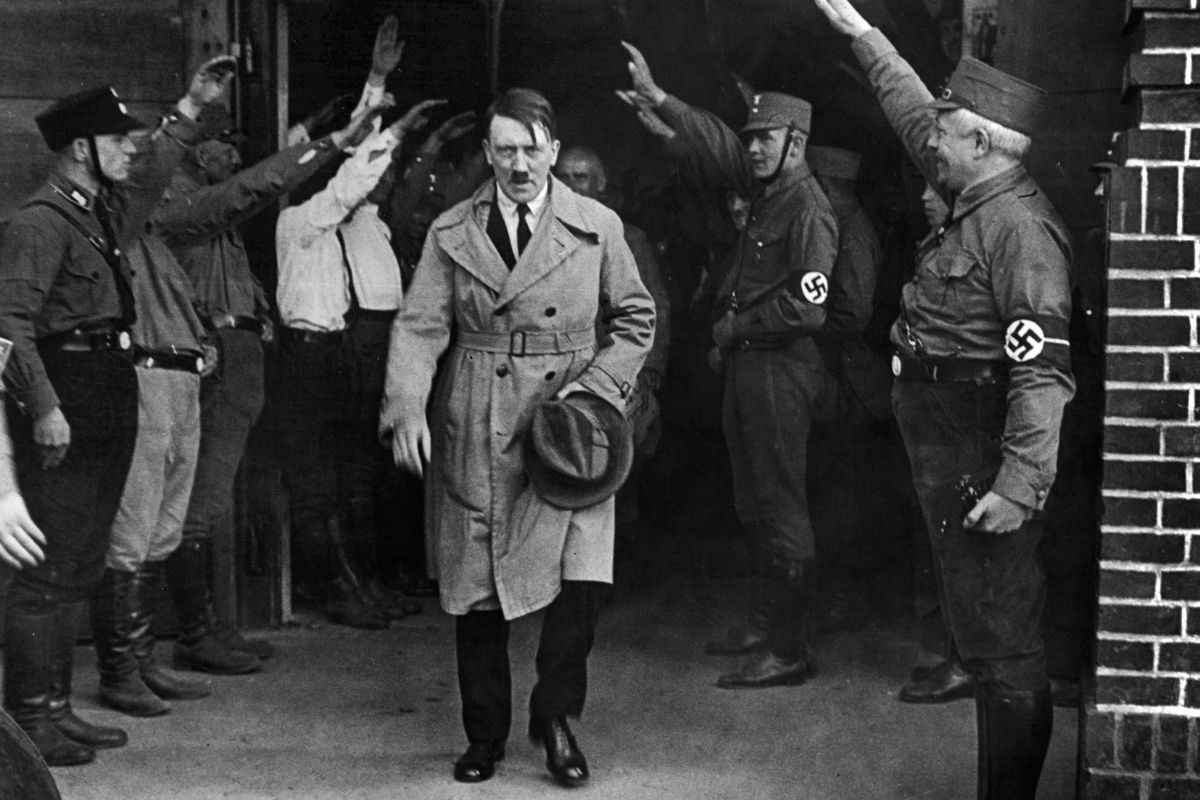 In the wake of Trump supporters storming of the U.S. Capitol — and the president’s tepid response — national discourse has naturally turned to World War II and the incremental rise of Nazi Germany. Long before Adolf Hitler became die Führer, an all-powerful chancellor, he was the radical leader of a racist, fringe faction. In 1923, his failed coup d’état (or, “putsch”) at a Munich tavern marked the first doomed step in Hitler’s ascent to power.

The Seeds of Hitler’s Dark Ideology

Adolf Hitler was born in Austria and moved to Germany in 1913. He served in the German Army during World War I and joined the short-lived German Workers’ Party (or DAP) following the Treaty of Versailles — which subsequently ended the war. Hitler, and many other contemporaries, believed the treaty was a national betrayal which stripped Germany of its military power; he condemned those who signed it as “November Criminals.” As the Weimar Republic found its early footing, the German Workers’ Party espoused the idea that Marxists, Jews, and the November Criminals were responsible for failures in the war. With this blameful rhetoric, the DAP quickly morphed into a new party: the Nazi Party. Hitler was appointed its official leader in 1921. Two years later, he attempted to seize power by means of physical force during an event that’s come to be known as the Beer Hall Putsch.

The Nazi Party gained national attention in 1923, following a botched coup d’état at the Bürgerbräukeller beer hall in Munich, Germany. Throughout the early 20th century, urban German bars were popular sites of mass socialization and political debate. As one of Munich’s largest taverns, Bürgerbräukellerwas a common hang-out for the leaders of Bavaria, and thus appeared to Hitler as the ideal locale to begin his violent domination. On November 8, 1923, during a speech by his former ally Gustav von Kahr, Hitler and his followers surrounded the bar with machine guns. Hitler, Rudolf Hess, Ernst Hanfstaengl, and other Nazis pushed through as Hilter fired a shot into the air. “The national revolution has broken out!” He accounted, informing the crowd that the Bavarian government was now deposed with a new government forming in its place. He held Kahr, Police Chief Hans Ritter von Seisser, and General Otto von Lossow at gunpoint, demanding their support. Meanwhile, Ernst Röhm and other Nazi co-conspirators waited around the city, ready to seize other public buildings.

Adolf Hitler then delivered an impassioned speech to the mass at Bürgerbräukeller. He advised his compatriots not to blame the Weimar army, the Reichswehr, for the political upheaval, but rather “the Berlin Jew government and the November criminals of 1918.” The crowd, shockingly, went wild. Dr. Karl Alexander von Mueller, a professor at the University of Munich who was an eyewitness to the event said:

“I cannot remember in my entire life such a change in the attitude of a crowd in a few minutes, almost a few seconds… Hitler had turned them inside out, as one turns a glove inside out, with a few sentences. It had almost something of hocus-pocus or magic about it.”

However, neither the Reichswehr army nor the state police joined forces with Hitler that day. When the Nazis marched to the Bavarian War Ministry the next day, planning to entirely overthrow the Bavarian government, the police shut them down. Sixteen Nazi Party members four Munich police officers perished on the frontline. Hitler fled to the home of Ernst Hanfstaengl but was soon apprehended and imprisoned.

The Aftermath of Hitler’s Attempted Coup

It was during Adolf Hitler’s brief stint in jail that his anti-Semitic views were formally solidified. His high-profile, 24-day trial for treason, rather than tarnish Hitler’s reputation, offered a massive platform to express nationalist sentiments. A sympathetic judge opened the courtroom, encouraged the defense, and sentenced the Nazi Party leader to just five years at Landsberg Prison. Despite revealing himself as a formidable public foe during the Beer Hall Putsch, Hitler served just nine months of the sentence. Throughout that time, he was treated kindly, even admirably, by the guards and received an influx of supportive letters and visits from Nazi loyalists. This goes to show the nationalist impulses which already were quietly coursing through the Weimar Republic.

It was in Landsberg Prison that Adolf Hitler first dictated Mein Kampf, the racist manifesto which would guide the Holocaust and sell one million copies during his first year in office, alone. While imprisoned, Hitler also realized that attaining power through legal means would prove more successful than a brute overthrow. And he was sadly right. Although the Munich Putsch seemed like a bloody calamity, it offered this fascist dictator the opportunity to wear down the public and begin spreading the propaganda which was so integral to the Third Reich.