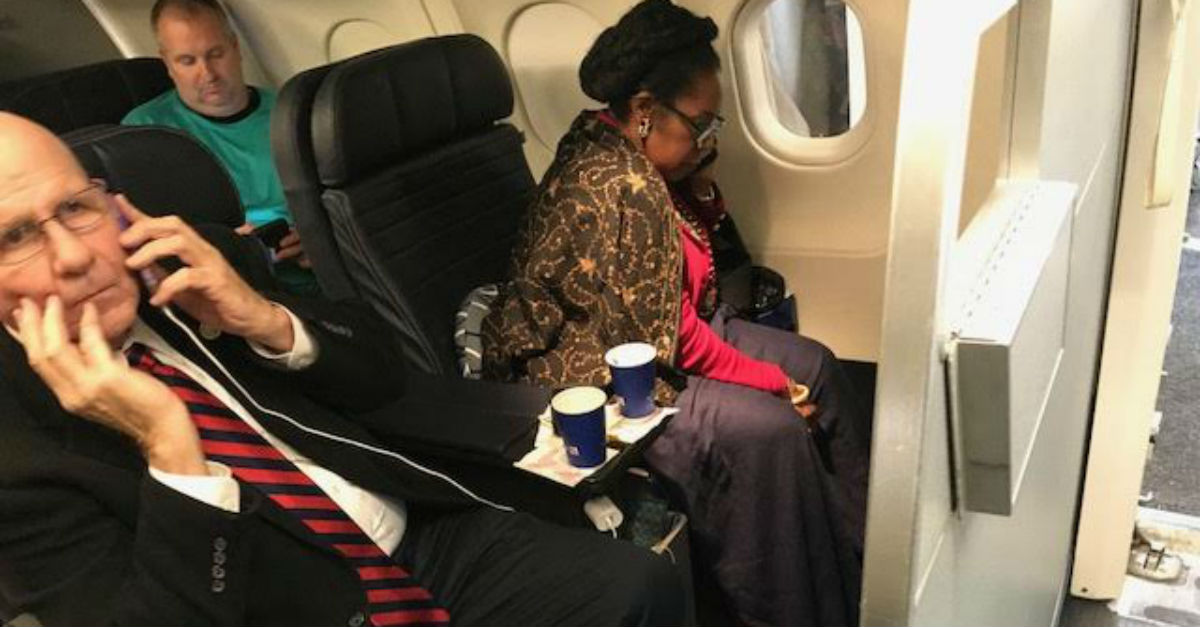 United Airlines is likely in for some bad press again. According to Houston Chronicle, Jean-Marie Simon, 63, was booted from her flight so that Rep. Sheila Jackson Lee (D-Texas) could take her first-class seat.

The attorney and private teacher said that earlier in the month, she used 140,000 miles to pay for the first class ticket to travel to Guatemala and then back to Washington, D.C. When Simon got to the gate at George Bush Intercontinental Airport to complete the final part of her trip, she was told that her ticket was not in the system. Instead, the gate attendant asked if she canceled the flight.

Simon said she was given a $500 voucher and asked to sit in Economy Plus after being told her first class seat was taken When she boarded the flight, she said she saw Jackson Lee sitting in the seat previously assigned to her. Simon said the airline threatened to remove her from the plane for complaining and stopping to take a picture of the congresswoman sitting in the seat.

Sheila Jackson Lee (D-Texas) in seat 1A the one I paid for dearly, and the one United gave to her without my consent or knowledge! Fellow congressman on same flight said she does it repeatedly. @united pic.twitter.com/Q2c6u6B0Yp

Simon tweeted that a fellow congressman alleged this was not the first time Jackson Lee had taken over a passenger’s seat. She accused United of giving the congresswoman preferential treatment, which the airline has since denied.

United later said in a statement that Simon canceled her reservation, which Simon denies:

After thoroughly examining our electronic records, we found that upon receiving a notification that Flight 788 was delayed due to weather, the customer appears to have canceled her flight from Houston to Washington, D.C. within the United mobile app … As part of the normal pre-boarding process, gate agents began clearing standby and upgrade customers, including the first customer on the waitlist for an upgrade.

Simon provided the Houston Chronicle a screenshot of a cancellation she made in August when a scheduled visit to Houston was interrupted by Hurricane Harvey’s landfall. She said that was the only flight she canceled.

The congresswoman also briefly accused Simon of racism, saying that she targeted her because of her skin color:

Since this was not any fault of mine, the way the individual continued to act appeared to be, upon reflection, because I was an African American woman, seemingly an easy target along with the African American flight attendant who was very, very nice. This saddens me, especially at this time of year given all of the things we have to work on to help people. But in the spirit of this season and out of the sincerity of my heart, if it is perceived that I had anything to do with this, I am kind enough to simply say sorry.

Simon said that after she posted about the incident on Facebook and Twitter, a “resolution manager” for the airline called her and apologized. She said that she wants a formal apology from the airline.

Simon’s experience only adds to the list of United’s public relations nightmares from this year. Two security officials were fired in October after a video of a passenger being dragged from his seat to make room for United crew members went viral. A mother also accused the airline of forcing her to wait two hours to deplane after her baby became overheated on a delayed flight.

Watch: Aisle Or Window Seat On An Airplane