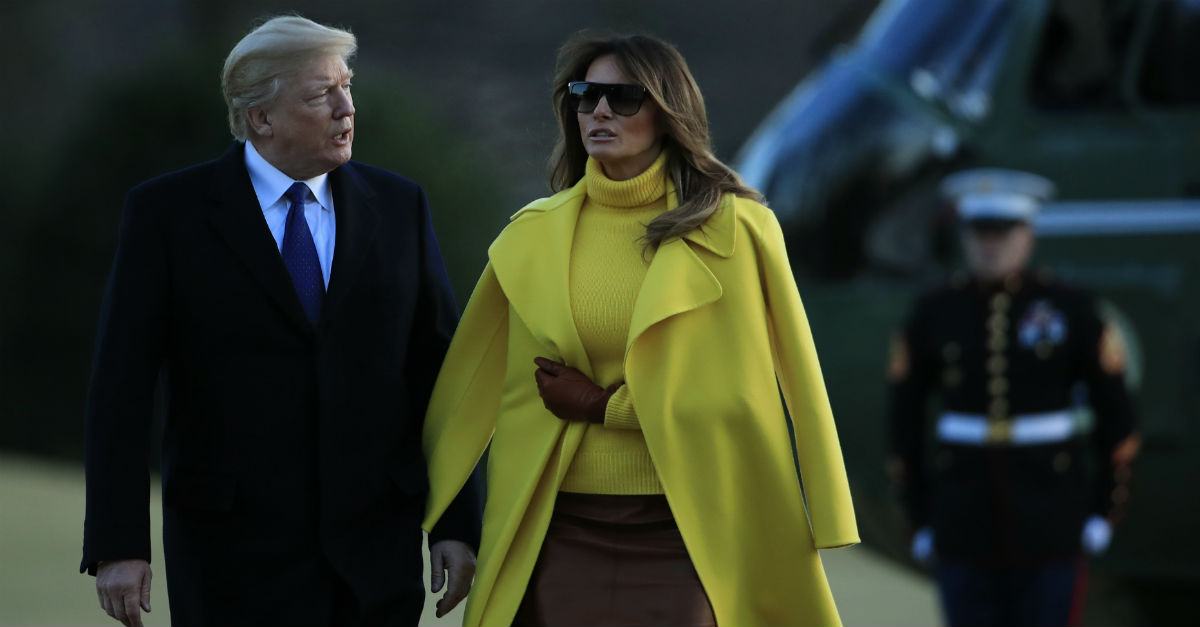 Melania Trump has been burning up the news lately, and the controversy that we’re calling #Swatgate continues escalating as the internet pontificates about whether the first lady was just spotted swatting her husband’s hand away.

The latest incident occurred as the Trumps were headed to Ohio, where the president gave a speech on Monday celebrating tax reform and encouraging supporters to get to the ballot box in 2018 and 2020. Melania, as always, turned heads with her outfit, donning a canary yellow coat draped over her shoulders as she walked to Marine One. At one point, Donald appeared to reach for his wife’s hand but couldn’t get past the coat, eventually putting his hand on her shoulder as the pair walked toward the helicopter.

This isn’t the first time that people have tried to draw conclusions from Melania’s body language: last Friday night, the first lady wore a red coat, and some people thought she stormed past her husband as they got off the plane in Florida. In fact, #Swatgate stretches all the way back to last May, when the couple traveled to Saudi Arabia and Melania was spotted slapping her husband’s hand away from her.

Many people have found the couple’s relationship curious at times. There was the instance in September when Trump told a crowd in Florida, “Melania really wanted to be with us,” as the first lady stood at his side. The week before that in Maryland, the president offered his wife an awkward handshake after she introduced him ahead of a speech.

RELATED: The 12-year-old patriot who sat next to Melania Trump at the SOTU said it was “amazing”

Though the current East Wing is usually pretty tight-lipped, the Daniels rumors did elicit a statement from Melania’s communications director, Stephanie Grisham.

BREAKING:The laundry list of salacious & flat-out false reporting about Mrs. Trump by tabloid publications & TV shows has seeped into "main stream media" reporting. She is focused on her family & role as FLOTUS – not the unrealistic scenarios being peddled daily by the fake news.