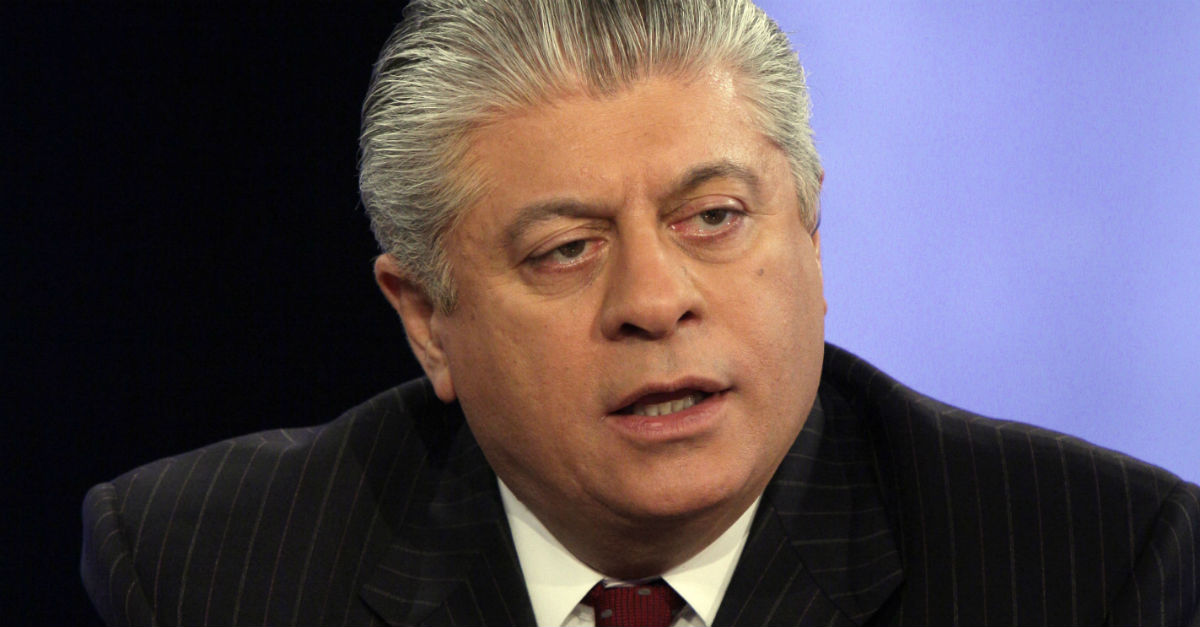 Fox News legal analyst Judge Andrew Napolitano broke from his colleagues over stories about the Federal Bureau of Investigation that led President Trump to tweet about the agency’s credibility.

It was revealed over the weekend that special counsel Robert Mueller had removed agent Peter Strzok from the investigation after his partisan text messages in favor of Clinton were found. Strzok worked on the probe into Clinton’s email servers.

During a Tuesday exchange with “FOX & Friends” co-host Brian Kilmeade, which can be viewed on Mediaite, Napolitano both defended Strzok’s ability to have a political opinion and his removal from the case:

I have never met an FBI agent that did not have a political opinion. They’re smart, intelligent people, they have the same feelings the rest of us do. But if those opinions cloud your judgment or animate your judgment, you should be off the case. So when Jim Comey utilized the services of Peter Strzok, he stayed on the case. When Bob Mueller recognized what an advocate this guy was for one of the two sides, he got off the case.

Trump used his early Sunday morning to tweet about the FBI’s credibility.

He kicked off his thoughts with a tweet that said, “Tainted (no, very dishonest?) FBI ‘agent’s role in Clinton probe under review.’ Led Clinton Email probe. @foxandfriends Clinton money going to wife of another FBI agent in charge.”

Trump doubled-down, calling the probe “phony and dishonest.” He also said the agency’s reputation was in “Tatters – worst in History” under the direction of Comey.

After years of Comey, with the phony and dishonest Clinton investigation (and more), running the FBI, its reputation is in Tatters – worst in History! But fear not, we will bring it back to greatness.

RELATED: Judge Napolitano predicts the news many are fearing for President Trump

The FBI’s reputation has already come into question this year by another source: the former director himself.

During a congressional hearing in May, Comey explained his decision to keep information about the probe into Clinton’s server away from then-Attorney General Loretta Lynch.

Lynch met with former President Bill Clinton on a tarmac at Phoenix Sky Harbor International Airport just days before an important FBI meeting with his wife. Lynch said the pair spoke of their grandchildren but later admitted regret for the optics of the meeting.

Comey criticized the meeting during the congressional hearing, fearing the ramifications it could have, regardless of what was actually discussed.

Comey worried that the Department of Justice “could not credibly complete the investigation and decline prosecution without grievous damage to the American people’s confidence in the justice system.” That’s when he made the decision to tell Lynch he was scheduling a key press conference and refused to give her any further details.

Comey: DOJ leadership made me worry that the department could not credibly complete Clinton investigation w/out damage to public's trust. pic.twitter.com/NuOXKltGBh

Trump fired Comey shortly after the hearing, citing concerns about his handling of the investigation into Clinton’s email server investigation. Comey reportedly didn’t know about the news until he saw it on a television in an FBI office based in Los Angeles.

Both the timing of the announcement and Trump’s reasoning raised questions, considering Trump was vocal in his support of Comey’s actions while on the campaign trail.

In response, the administration later said that Trump considered Comey’s firing for several months before making the final decision.