There’s been another school shooting, this time in Kentucky — here’s what we know 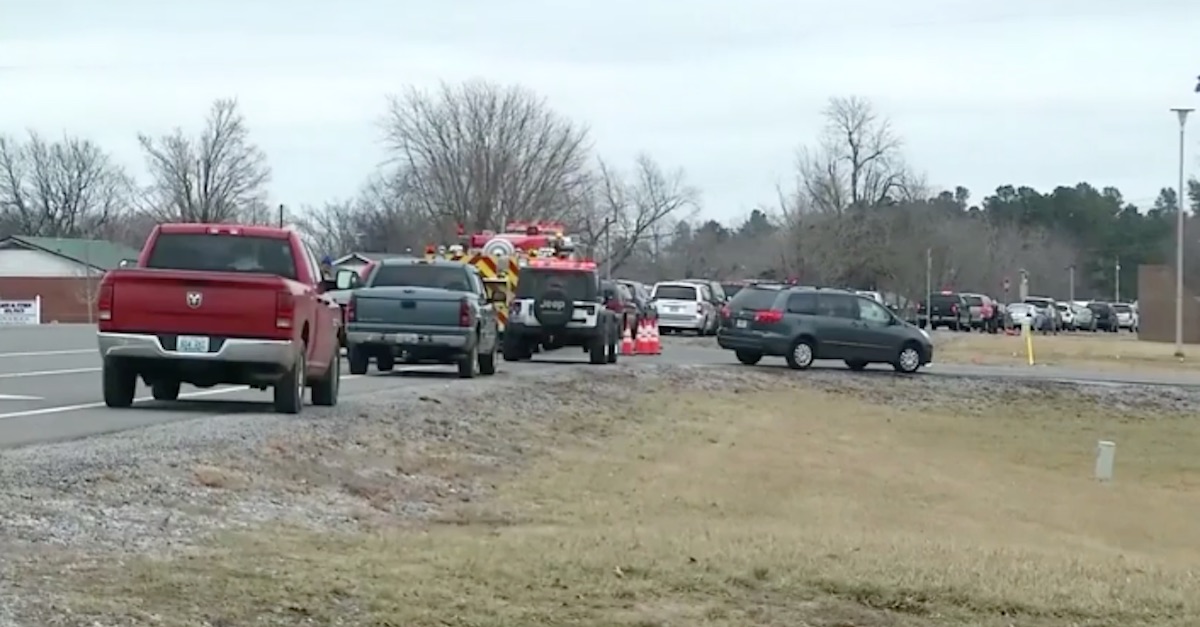 BENTON, Ky. ? Someone with a gun opened fire inside a rural Kentucky high school Tuesday morning, killing one person and wounding at least a half-dozen others. Police said a suspect was apprehended and the school was locked down.

Nearly 100 children ran out of Marshall County High School seeking safety, said Mitchell Garland, who rushed outside of his business when he heard about the shooting.

?They was running and crying and screaming,? he said. ?They was just kids running down the highway. They were trying to get out of there.?

A half-dozen ambulances and numerous police cars converged on the school. Officers in black fatigues carrying assault rifles showed up as well. Cars lined up on both sides of an adjacent road as parents desperately tried to find their children.

Garland said his son, a 16-year-old sophomore, jumped into someone?s car and sped away before reaching his office.

?Everyone is just scared. Just terrified for their kids,? Garland said. ?We?re a small town and we know a lot of the kids.?

Kentucky State Police said the suspect was apprehended by a Marshall County deputy. No more information about the suspected shooter or the apprehension was immediately released.

A statement from Gov. Bevin regarding this morning's events in Marshall County: pic.twitter.com/0n0cxgJkvi

Savana Smothers, the school?s assistant girls? soccer coach, scrambled to account for all of her players. All the girls were safe, she told The Associated Press in a Facebook message. She also said she was trying to get a head count for all the students who attend her church.

?You just never think this will happen in a small town like ours,? she wrote.

Federal authorities joined state and local law enforcement in responding. Gov. Matt Bevin ran out a side door at the Capitol in Frankfort, saying he was headed to the school as well.

?It is unbelievable that this would happen in a small, close-knit community like Marshall County. As there is still much unknown, I encourage people to love each other,? Bevin later said in a statement.

Marshall County High School is about 30 minutes from Heath High School in Paducah, Kentucky, where a 1997 mass shooting killed three and injured five. Michael Carneal, then 14, opened fire there about two years before the fatal attack at Columbine High School in Colorado, ushering in an area when mass school shootings have become much more common.

Meanwhile, in the small North Texas town of Italy, a 15-year-old girl was recovering Tuesday after police said she was shot by a 16-year-old classmate in her high school cafeteria on Monday, sending dozens of students scrambling for safety.

The scene of Tuesday?s shooting was chaotic, with parents and students rushing around trying to find each other, said Dusty Kornbacher, who owns a nearby floral shop.

?All the parking lots were full with parents and kids hugging each other and crying and nobody really knowing what was going on,? Kornbacher said.

Barry Mann said his 14-year-old son was put on a bus and taken to another school for him to pick up.

?He gave me a call as soon as he run out the door and I didn?t know what was happening to him,? he told the AP. ?It sounded like his heart was in his throat.?